Growing up in the 80s, I had the privilege of experiencing RPGs in their infancy. Games like Dragon Quest, or Dragon Warrior as it was originally called in early American releases, and Final Fantasy had the limitations of primitive graphics and sounds and had to rely on their storytelling and gameplay to truly shine, leaving the player’s imagination to fill in the blanks. Even though these past games lack the immersive feel of the graphical powerhouses of modern RPGs, they had a charming fairy tale quality to them. Pillars of Dust attempts to recapture this charm, injecting its own style of whimsical writing into an age-old formula that offers a pleasant experience for both audiences of the past and newcomers alike.

Like Something Classic Games’ previous title Shadows of Adam, Pillars of Dust takes some of the best parts of classic RPGs and combines them into one bundle. It plays more on the nostalgia of veteran players rather than offering an experience that reinvents the wheel. The flaws that pop up here and there are usually insignificant to where it does little to hamper the overall enjoyment of the game. However, Pillars of Dust delivers a bit too much simplicity in terms of world exploration, leaving players with a linear adventure that offers very little off the beaten path.

Players begin the game with the option of choosing between two protagonists: Carlton, the prince, and Gregg, the pauper. Carlton lives in a nice castle whilst Gregg starts the adventure in a decrepit hovel. Each one meets a wise man early on, who tells them to venture forth to discover their fate. Regardless of which character the player initially chooses, they both set out on an adventure to discover the truth about Alluriga and themselves. What Gregg and Carlton do not know is that their journeys run parallel together.

The problem is, despite the whimsical humour and appeal peppered throughout the writing, the whole narrative feels inadequate. The game begins with an explanation of historic events that lead to present circumstances, but the townspeople and events fail to flesh the world out. There are small plot points that carry the player from one location to the next, such as acquiring a given item that unlocks access to the next area, but the story ultimately lacks the suspense needed to draw the player in. The overall plot is too basic, simply taking players from one objective to the next, and most of the characters have very little personality aside from a few quips upon their introduction. There are secrets to find, and the game tallies how many the player has collected and how many remain, which is a fun feature. However, aside from completionists, this addition offers casual players very little incentive to explore or further engage with the world. Thus, Pillars of Dust‘s story, while never being horrible, becomes a weak point for the game. 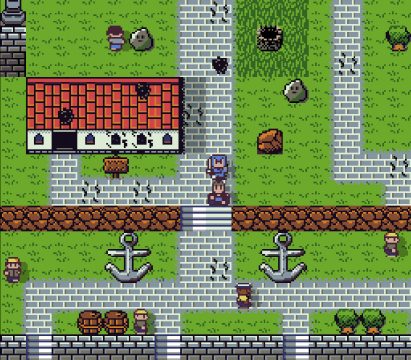 Be sure to search every barrel, well, or pot for secrets.

The strong point of the game lies in the simplistic, yet fun gameplay whose style bears heavy influence of the NES RPGs. Besides a few notable differences, most of them are quality-of-life improvements appealing to modern gamers. The straightforward combat takes place in first-person perspective, and the mechanics are very balanced in comparison to the older games where the difficulty curve can drastically fluctuate from each random encounter. As long as players don’t make rash decisions, each battle is very much winnable. The introduction of the Doom Counter adds another element of strategy to battles, albeit very sparingly. When the Doom Counter progresses into further phases as battles are drawn out, enemies become stronger. However, since most battles end before the Doom Counter goes into the second phase, this element only comes into play with boss fights, making it seem like a gimmick more than anything else.

There are several interesting combat mechanics that are unique to Pillars of Dust. The most interesting aspect is the reduction of grinding, which is accomplished by the game fully healing the party and removing the need for experience points. Instead, players encounter the monsters on the map, deciding whether to fight or run away. Stats are increased semi-randomly by one point after a battle or by the player’s choice at the end of a chapter. Which commands a player uses in combat exerts some influence over stat growth, as those who often use spells tend to raise magic power, whilst those who utilise melee attacks more often get an increase in attack power. This concept allows players to develop the protagonist into their own desired class of choice, especially with a variety of learnable skills, such as healing or attack spells, and up to four can be allocated on the main character at any time.

The freedom to choose party members add to the depth of strategy to the game, but this depth is limited by other factors. The player can recruit one more party member, and there is a shop that allows the party member to be switched out with another character of a different class — for a price, of course. The classes consist of wizard, cleric, ninja, or just a typical melee fighter. Whoever the player chooses will greatly affect how combat plays out. Having a melee or a wizard as a companion will greatly increase the damage output per round, but a cleric or buffing-character can greatly add to the defensive options. 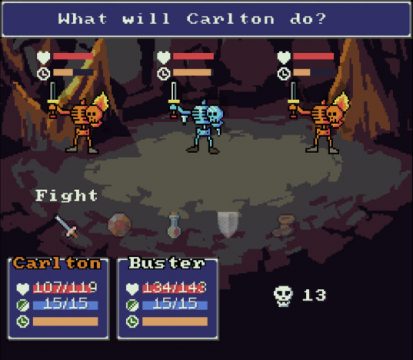 The battles are fast-paced affairs

As is immediately obvious, the graphics in Pillars of Dust pay homage to the 8-bit era of RPGs. It mostly resembles Dragon Quest IV, but without the tidy layout design of the towns and overworld map. The pixel-based designs are hit-or-miss, as some things such as jars and plants look great, but NPCs look drab, even for an 8-bit design. Interacting with certain NPCs opens up an animated portrait scene, which is a nice touch. The overall look of the game gives it a ‘modern retro’ type of feel, with a few portraits giving off the nostalgic touch of the ’80s.

The game’s music hits the right notes at times, but falls flat in certain places. During the intro, the soundtrack gives a good first impression, opening the game in an appropriate way that veteran players can appreciate. Yet, some areas such as an underground passage may have a track that sounds repetitive and bland. Most of the chiptune tracks strongly resemble the 8-bit RPG influences, boasting mostly good quality and consistency with the retro feel. Of course, being a retro-inspired RPG, there is no voice acting, but there are certain chiming sound effects that accompany levelling up or discovering secrets — a nice callback to games like Dragon Quest.

For those looking for a retro RPG to indulge in without the numerous flaws of unnecessary grinding and unbalanced difficulty of the older games, Pillars of Dust offers a fast-paced, well-balanced option. There’s enough humour in the writing to keep it engaging. Although the gameplay gets repetitive and the overall story never takes itself seriously, the game is short enough that it does not overstay its welcome, lasting under ten hours even for the most casual players. It may not be a masterpiece, but it’s not an unpleasant stroll for those who want to take a brisk walk down the retro path.