A Quest to Quell Nobunaga’s Ambitions

I have a love for action-adventure games. They always manage to get me feeling like I am in the middle of some grand journey whilst fighting off baddies at every corner. Onimusha: Warlords has this effect in spades, even eighteen years after its initial release. While I never was into the Onimusha series beforehand, this remaster sought to change that.

Onimusha: Warlords takes place in a feudalistic Japan where Nobunaga Oda has become a servant of a demon race called Genma. He commands his demonic forces to kidnap Princess Yuki so he can sacrifice her to obtain more power. Her cousin, the goodhearted samurai Samanosuke Akechi, receives word of this and sets off to rescue her. With his kunoichi friend Kaede in tow, it is up to both of them to foil the dastardly plot of Nobunaga and save Japan from a demon invasion. 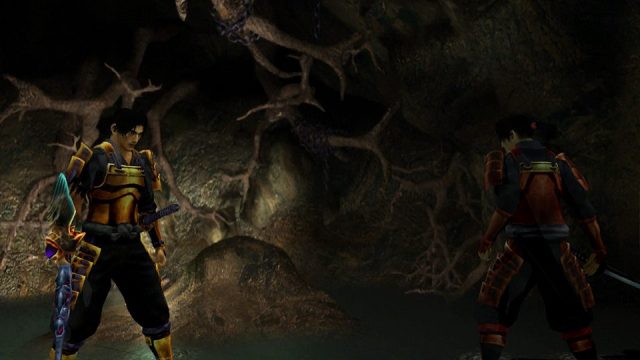 Faker? I think you’re the fake samurai around here!

The plot for Onimusha: Warlords is rather involved yet not too complicated. It is fairly simple to follow and understand, which serves as a good compliment to the gameplay. In addition, the game’s unique setting adds a great atmosphere fit for a samurai’s journey. There are some obvious remnants from the game’s status as a remaster of a title from two console generations ago. However, the touch-ups given in the HD remastering do make this version of Onimusha: Warlords notably cleaner and smoother. However, the same cannot be said for the English voice work. It just comes off as amateurish and campy. Luckily, players do have the option of switching over to Japanese audio if so desired. Speaking of audio, composer Takashi Niigaki has orchestrated an impressive score. Onimusha: Warlords’ music ranges from ambiance in the background to bold tracking at the forefront of the action, including one particular standout track, “Gale”, that plays while players are in the Dark Realm area.

The combat is where Onimusha: Warlords truly shines. The system itself is fairly simple, as players hack-and-slash through enemies with basic combos and skills. When playing as Samanosuke, players are given quite a few tools to work with. There are four swords: the thunder sword Raizan, the fire sword Enryuu, the wind sword Shippu, and the ultimate Bishamon Sword. The first three have elemental attributes that allow Samanosuke to performs special attacks, such as the Raizan’s series of electrified slashes. The Bishamon Sword is only accessed before the final boss, but combines the powers of the three other swords into one. Overall, these extra elemental attacks add a nice layer of variety to the standard strikes. It should be noted that the swords differ in control. The Shippu is the fastest yet weakest, the Raizan is quick and modestly strong, and the Enryuu is the slowest but strongest. In addition, Samanosuke has a bow and a matchlock in his arsenal. Both make for good ranged weapons against many enemies. 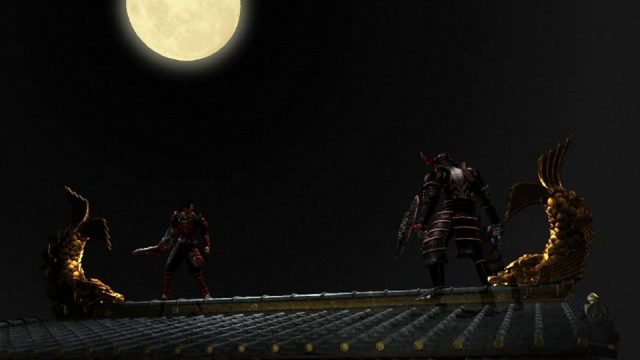 My personal favorite fight was the first battle against the Genma Marcellus.

Another important tool is the Oni Gauntlet, an item that enables Samanosuke to absorb the souls of slain Genma. Souls come in three varieties: yellow, blue, and red. Yellow souls restore health, blue souls recharge elemental attacks, and red souls are used as a substitute for experience points. Once a player has harvested enough red souls, they can use them to upgrade Samanosuke’s weapons, orbs, and extra items. Orbs are a means of unlocking doors throughout the game and upgrades to them allow for higher level locks to be unlocked. Each sword, with the exception of the Bishamon, and orb can be upgraded up to three levels. With each level, the swords get stronger and take on new appearances. Finally, red souls can also upgrade ammunition and healing items. This upgrading system is rudimentary but adds a decent layer to character progression.

At times, players will find themselves controlling Kaede. The major difference between her and Samanosuke is that she lacks the Oni Gauntlet. She is also limited to fewer weapons and items. Kaede’s main forms of dealing damage are her dagger and kunai. Her dagger acts as a melee weapon while her kunai are her ranged weapons. Kaede cannot absorb the souls of Genma, making her sections a bit more difficult while conserving healing items. Both characters control smoothly, thanks to the addition of analog support in the HD version. They both move rather quick and are easy to handle. The analog support is somewhat of a godsend, compared to the original’s tank controls akin to the Resident Evil series. 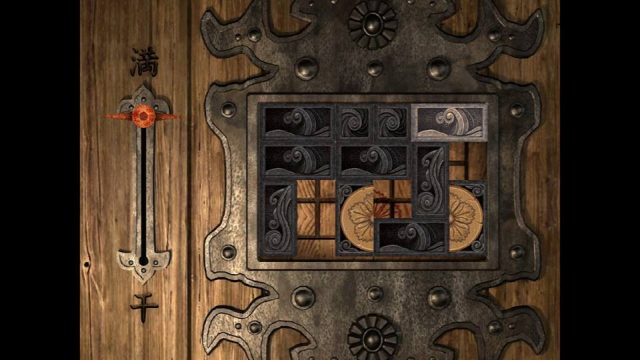 Lastly, there are sections of Onimusha: Warlords that contain puzzles. A majority of the puzzles throughout the game are easy to solve. That is, however, save for a water control puzzle midway through the game, where players must form a lotus emblem in the middle of a panel. The puzzle requires players to slide pieces on a grid to get the seal pieces to match all the while working under a time limit that, if failed, results in a game over. This will have players booted back to the last save point and forced to solve all the puzzles leading up to this one again.

While Onimusha: Warlords may be an older game, I believe it has stood the test of time fairly well, and has gotten me interested in checking out the later entries. The game is thoroughly enjoyable the whole way through with very few dull moments. Overall the game, albeit a short one, provides a great experience that culminates into a strong title.