Not Safe for Work

Please note that this review covers a title and contains descriptions that some readers may find objectionable and probably isn’t safe for work.

Games with sometimes questionable premises aren’t new to either western or eastern gaming, but games intended for adult entertainment have largely remained untranslated or catering to a very niche PC market. Moero Crystal H skirts a fine line to make the leap west on Nintendo Switch, combining first-person dungeon-crawling with monster girl recruitment and some slightly perverted mini-games into a surprisingly solid RPG.

To set the mood for the story, the game uses a limited combination of music and sound effects, which are both sadly bland and lacking updates since the previous game, Moero Chronicle Hyper.  Thankfully, the graphics have seen a face-lift and the monster girls look better than ever, with brand-new characters being introduced and those returning from previous titles in the series sporting new or improved outfits.  The graphics are bright and colourful, with plenty of detail, and every dungeon has its own distinct designs and personality.  While all the monster girls have good design with attention to detail in their poses and outfits, the dungeon leaders particularly stand out and look fabulous, with multiple pieces of clothing designed to be destroyed separately and still look cohesive.   Easy to use menus have also seen an upgrade from previous titles, and it’s easy to quickly access visual information on each monster girl in the party.

The plot of Crystal is simple: the Bra of Darkness has been stolen, only the Panties of Light can counteract its nefarious powers, and whoever nipped the brassiere is running around turning monster girls evil.  As the seemingly sole male in existence, main character Zenox (nicknamed “The Luckiest Pervert”) must take Otton, current holder of the Panties of Light, around a variety of dungeons with a party of monster girls to get back the Bra and rescue all the tainted monster girls.  The localization is a bit of a mashup of incredibly witty lines and puzzling typos, with no way of predicting when each will crop up.  While the motivations are silly, the character interactions are ridiculous, and the plot never evolves much beyond mild slapstick, but it does serve to buoy the game along from start to finish. 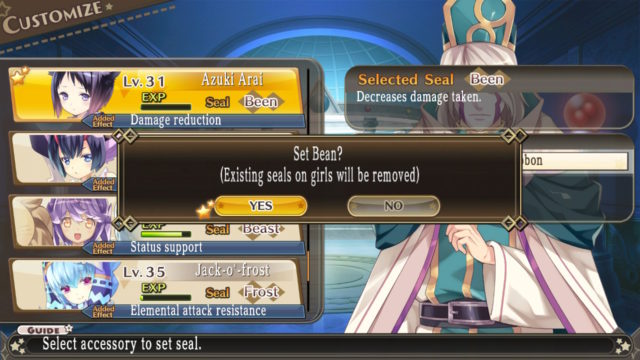 Goofy typos and awkward phrasing litter the text, and is distracting.

As expected of a first-person dungeon crawler, players will spend ample time exploring dungeons and diving into combat.  Compile Heart has continued to refine its first-person dungeon crawlers in both adult-oriented games like the Moero series as well as titles like Mary Skelter, and its ever-expanding depth of experience is showing with each successive title.  On the surface, combat is fairly simple, with both random encounters as well as enemy sprites on the map where predetermined battles will take place.  What balances combat is the elemental system, where each enemy and ally is strong against or weak to one of four elements.  As the party attacks these elemental weaknesses, their combo counter rises, which not only increases the damage dealt, but can also activate their combat ally Otton for extra damage.  Combining together similar elemental attacks can set off the 48 Erotic Elements, which lash out at enemies for additional damage, though lining these up can be a little tricky.  At the end of combat, a bonus experience boost is provided, which grows depending on how high the player’s elemental combo was raised, so while this system technically can be ignored, it encourages the player to utilize strengths and weaknesses with a balanced party comprising attacks of all four elements.

Freeing monster girls from their dark blight is similar in function, but differs slightly in form; tackling a monster girl and removing the curse means destroying all their clothing, with each piece of clothes following the same elemental strength and weakness model that regular enemies do.  Once the outfit has been destroyed, the player must then rub the darkness out of the monster girl by discovering three hidden pleasure points.  These are typically a combination of breast, thigh, buttocks, and identifying marker for each monster girl — one wearing a crown would likely have a pleasure point on the head, while another wearing ornamental footwear could be sensitive around the ankle. Each girl moans and groans as they’re touched in the right way, so if one were to chance playing it with others in the vicinity, headphones or silence are recommended to avoid fully giving away that it’s something inappropriate.

In addition to choosing which monster girls are in the party of five, each can be customised through their equipment and outfits. Each monster girl can equip one ribbon, one necklace, and two accessories, which provide largely stat boosts.  Outfits are unlocked as the party finds new panties scattered around each dungeon, and these can drastically affect the repertoire of combat skills a monster girl has. A sample set of outfits could have one with progressively more powerful physical earth attacks; one with progressively more powerful magical earth attacks; one with basic attacks for earth, fire, and water; and one focusing on buffs and debuffs.  Which panties are discovered in each dungeon is entirely random, and some won’t even show up until a dungeon is completed, so picking a party is sometime necessitated by the selection of outfits a character has available, rather than personal preference. 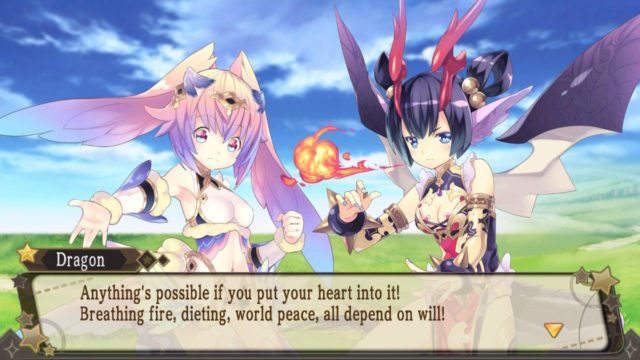 Each new monster girl that joins gets interactions with Zenox and other members of the team.

Lastly, as more monster girls are freed from the taint of the Bra of Darkness, they can be set as companions for the active party.  Each member can have both an attack and support companion, meaning a total of fifteen monster girls in the party at any given time.  As monster girls work together, their relationships with each other improve; once two girls reach three or more stars they can live together as roommates, with five stars unlocking the double scratch mini-game, using the same pleasure points as when rescuing them to improve Zenox’s relationship with both participants.  Overall, these are nice improvements over Moero Chronicle Hyper, and provide surprising depth for what is, on the surface, a game about touching mostly naked girls.  For those who can’t get enough after the main story is completed, which takes 25-30 hours, there’s an expansive epilogue with more dungeons and more monster girls, though it’s worth noting this post-game challenge is considerably more difficult than the main story; each level up becomes precious as stats, particularly HP, grow rapidly each level.

Outside of dungeons, there are numerous side activities to dive into in Crystal.  The overall breadth and depth of activities is a nice touch not seen in many first-person dungeon crawlers, with most focusing on building up not just the combat viability but the relationships of the eighty monster girls available to recruit.  First and foremost is the inn, where the monster girls live; many different aspects of monster girl management are housed here.  Visiting each girl’s room, using the scratch mini-game, and giving presents will increase each girl’s affection meter.  At one heart, the mini game Doki Doki Shooter unlocks, which will take up most of the player’s time at the inn; at four hearts, a second trait is unlocked for each monster girl, which gives minor boons during combat; and further affection levels unlock extra story events for each girl.

Doki Doki Shooter has the player shooting off each monster girl’s clothes with a ship designed clearly meant to evoke comparisons to something else in order to unlock each monster girl’s final heart, the ability to mix and match bra and panties, and a hidden skill.  These skills in particular are a must for any party member, as they are frequently large area-of-attack skills that cannot be acquired any other way.  Also acquired in these Doki Doki Shooter levels is a building material unique to that specific monster girl, which is required to upgrade each room in the inn.  An upgraded room gives an immediate boost to the owner’s relationship with Zenox, as well as increasing the effectiveness of future relationship boosts, plus increased experience when not in the active party.  While room upgrades are not new to Crystal, the ability to easily and consistently seek out these materials is a huge upgrade from Moero Chronicle Hyper. 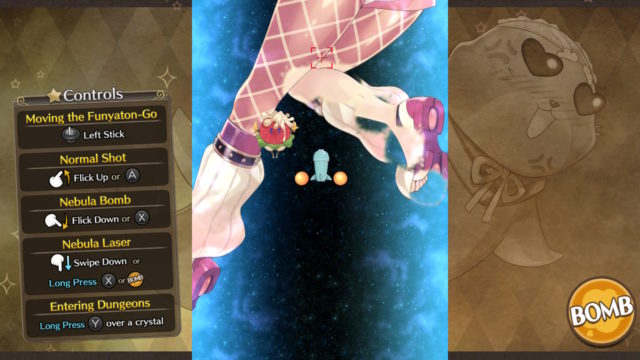 A local shop is available to buy and sell healing items as well as some basic pieces of equipment, though the player will generally be leaning on equipment found while dungeon-crawling.  To further customize this equipment, Zenox can head over to the Soul Temple, where each monster girl’s seal can be unlocked with special spheres that drop after combat.  Once released, each seal can be applied to, or removed from, any specific piece of equipment for free.  Equipment can also be upgraded to boost its base stats a total of nine times.

If a dungeon is providing to be too challenging for the player, they can head to the Resting Place in town.  At this relaxing day spa, monster girls in the party can kick back to boost one single, specific stat or take a snooze to raise several random stats.  As even a small increase in stats can be incredibly helpful, using the Resting Place is a good investment. However, these stat boosts are temporary and lost once the party exits the next dungeon.  Alternatively, players can head to the Training Center in town to practice fighting against past foes, to free monster girls trapped in crystals, or capture six monster girls previously only available via DLC.  While these encounters give less experience than those found inside a dungeon, with quick access to healing and buffing, they’re a safe way to grind up any needed levels.

Overall, while Moero Crystal H has its ups and downs, it’s a noticeable improvement over Moero Chronicle Hyper and provides ample opportunity for gameplay outside of the traditional first-person dungeon crawling experience.  For those who enjoy, or at least aren’t put off by, the copious near-nudity, lewd imagery, and colourful characters, Crystal stands out as one of the better dungeon crawlers on the Switch.  Just maybe don’t play it in public.