First catching a few gamers’ attention in September 2016 with a Kickstarter campaign that only reached about a third of its stated goal, one-person French studio neko.works nevertheless persevered and released the first of four planned parts to its Light Fairytale RPG in May 2019. The title of Light Fairytale Episode 1 defines truth in advertising, being a short first chapter to an eventual longer game that so far is light on plot, light on gameplay systems, but offers some nicely-lit locations for players to visit.

Light Fairytale focuses on two main protagonists: Haru and Kuroko. They’re best friends that live deep underground in a post-apocalyptic cyberpunk city of scavengers, where the best hope for a good life is a steady job at the warehouse. Guards employed by a seemingly evil Empire are located all around and impose their will on the populace, even taking citizens away for the most minor of offenses. While Episode 1 doesn’t have much of a plot, Haru desires to see this far-off sky he’s heard rumors of, while Kuroko tags along more like a love sick pup. While the title obviously promises more to come, there’s not much plot development in Episode 1 other than what’s already been summarized. 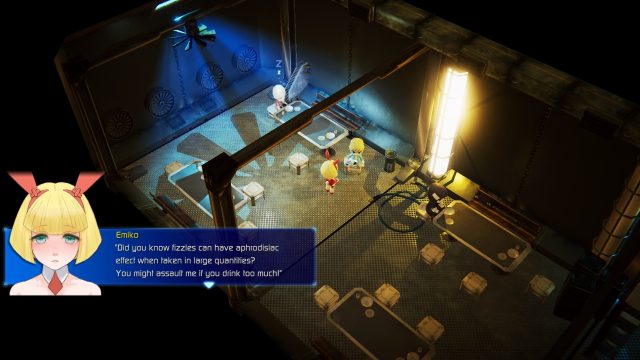 Who knew healing sodas had that side effect?

The developer’s stated goal of Light Fairytale is “to bring back the immersion and emotion of ’90s-era JRPGs.” With a game length under three hours and little plot development in that time, the immersion and emotion aren’t quite there yet, but the battle system feels very grounded in that era. Battles are traditional turn-based affairs, operating on an ATB system where players can see the turn order on-screen. Commands include your typical Attack, Defend, Item, Magic, with a fury bar that builds up as damage is taken and is used to unlock Kuroko’s heavy attack or Haru’s group heal.

The magic system seems somehow based on equipping various orbs on different parts of characters’ bodies, but there was very little room for experimenting with this available in Episode 1. The characters conveniently start with an elemental orb that virtually all enemies are weak to, but only one other orb was discovered during gameplay and it had no noticeable effect when equipped to various parts of both characters’ bodies. The system might have promise in further episodes, but at this time it’s quite basic. The equipment available for purchase was extremely limited and not at all helpful. The few upgrades available at the single store only increased character stats by a single point. Coupled with limited money and the high price of healing items, the game was quite difficult to complete, with multiple attempts needed for a few specific fights.

Battles take place as characters walk through set zones where enemies can appear in the environment. Activating the in-game VR goggles lets players see these locations clearly displayed on the screen, making it possible to avoid some enemies completely while highlighting other points of interest such as NPCs or area exits. The latter is quite important as the backgrounds look good, they don’t necessarily telegraph the exits very well. 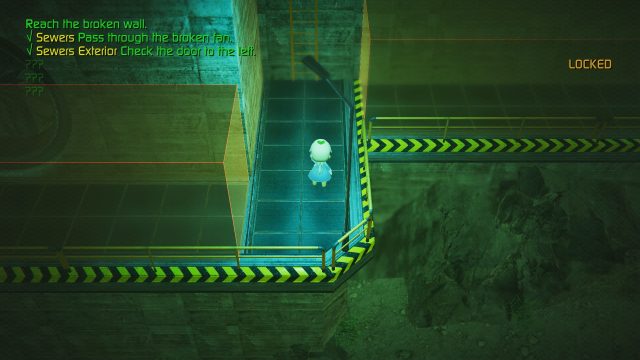 Use VR goggles to show zones where enemies are located and bring up a checklist of plot points.

A couple of bright spots about Light Fairytale Episode 1 are the music and art direction. The game sounds very nice, with the ambient noises of an underground city really helping to set the feel of the environment. Other sounds, such as the hissing effect made by some mechanical enemies as they vent steam when close to defeat, are nice little touches. The lighting and shadow effects deserve special praise as they make certain areas, enemies, and attacks look much more amazing and unique than they otherwise would be. Sadly, while the characters look nice in the game’s artwork and character portraits, all 3D chibi models come off as quite bland in comparison to the well-designed settings they navigate.

Light Fairytale Episode 1 has some decent bones of a good JRPG, but there’s very little to speak of about the body of the game at this point. For the most part, the game looks and sounds nice, but battles are lackluster affairs that boil down to attack-attack-heal, with many systems not yet fully implemented. Plot is similarly thin, with no character growth or development yet. While this Episode 1 shows promise of something perhaps worthwhile in the future, at this point it’s nothing more than a paid prologue. 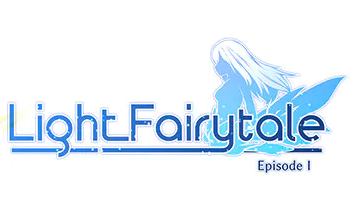