A Reckoning of Boxes

Kingdoms of Amalur: Reckoning is a new IP from Big Huge Games, a newcomer to the RPG scene, but it has an impressive amount of experience behind it. Baseball all-star Curt Schilling gathered Todd McFarlane, R. A. Salvatore, and Ken Rolston to help him craft the world of Amalur, the fantasy world where Reckoning and the completely separate Kingdoms of Amalur MMORPG take place. Despite these big name people overseeing their respective aspects of the game’s development, the team at Big Huge Games is the backbone of this single-player title, and it’s a great lead-off game.

In Reckoning, players assume the role of a character freshly raised from the dead via the Well of Souls, a first success for this strange gnomish invention. However, the main character has no prior memories and is forced to escape the Well before any explanation can be given. Fate plays a big part in Amalur’s setting, as everyone has a path they are destined to follow, but this newly resurrected warrior is a blank slate with no predetermined fate. Players are tossed into the world and are tasked with finding out how they died, who is trying to re-kill them, and how they can stop the evil forces at work in Amalur.

Herein lies one issue with Reckoning‘s story; for a character with no set fate there are very few choices as to how the game plays out. In an open-world with many corners to explore, the main quest is fairly linear. That said, Reckoning‘s ancillary characters are an interesting bunch, though few receive enough development to really bring them to life. The elusive assassin Alyn Shir is so mysterious that players hardly learn about her. One of the other big players, Agarth, is also given very little screen time to really show his growth, despite changing from a washed-out warrior resigned to fate into a once-again hopeful man. Instead the game’s main quest is spread too thin over the massive amount of side content. 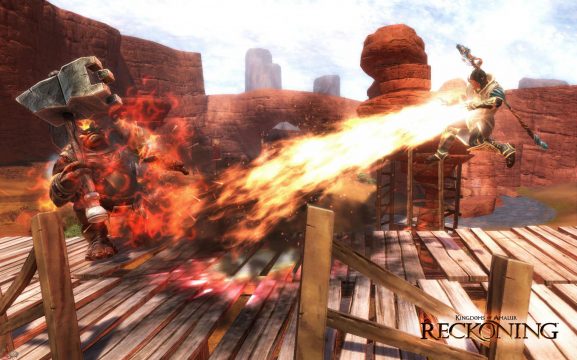 BBQing a Troll for Gameday

The game is very lore heavy, and for those interested in digging in and really learning about the world of Amalur, there is plenty to do. Some of the longer optional content goes deeper than simple “go here, fetch this” quests. One early adventure gives the player the option of killing off an evil menace or opting to side with her and murder everyone in town instead. Unfortunately these quests are not always readily apparent, so it’s tough to tell if a quest will end after a few collect-a-thons or delve deeper until they are finished. That said, all of this side content is completely optional and will only serve to further develop the world and to gain players massive amounts of loot.

For the majority of the game, Reckoning often feels like a loot-gatherer, as random equipment drops are located everywhere from rock piles to spider corpses. Players can also buy loot or attempt to break into houses to steal things instead. Sadly, characters with awesome looking gear don’t drop what they are wearing when killed, so mass genocide only nets players random drops. There is no shortage of equipment, and the game’s interface makes it simple to quickly compare stats and easily equip a better piece. There is also a handy feature to simply toss unwanted items into a junk pile to be swiftly sold to the next vendor, making inventory management a smooth process.

While Reckoning does not have as strong of a narrative focus or any tough story choices to make, the game’s combat system makes up for that. Combat is fast, responsive, brutal, but most importantly, deep. Two different weapons and four of a dozen of available skills can be equipped at any time, all of which can be changed on the fly. This means players can mold their character to fit their playstyle and if that style changes, so can the character. As players venture around the world of Amalur, they will be slaughtering hordes of enemies via combos and juggles using both standard melee attacks and skills. The options seem endless and combat never gets old, even when fighting the most basic of enemies. 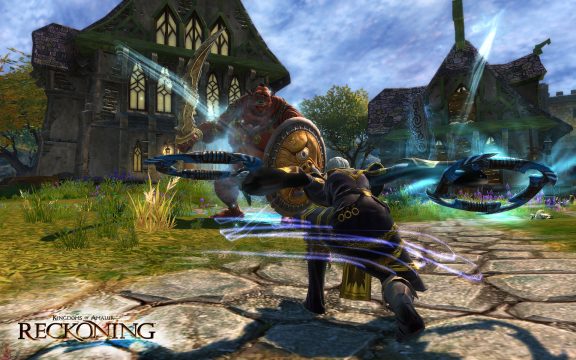 With three different skill trees to pull from, mage, warrior, and stealth, and nine different weapon types, there is bound to be something for everyone. Mixing mage spells with stealth, daggers, and massive hammers is every bit as viable as being a full-on warrior. The best part about the combat system is that players are not locked into any of these decisions, as it’s easy to mix-and-match and even to reset all abilities and start over with a new build. Players can opt to play as a male or female of one of four different races, including two human and two elven, each of which offers different starting bonuses. Throughout the game’s thirty hour main story line, the constant options for progression are well-paced, always offering something new. Whether it is fancy loot, upgraded skills, or destiny bonuses, it never stops being fun to actually play, even if players simply want to stop and smash boxes.

Destiny cards serve as the class system, and it is a very open and flexible setup. Based on how many points are placed into each skill tree, different cards become available, and these can be changed at any time via the menu. A warrior-based destiny card will grant bonuses to damage and other areas for a melee-focused character, while mage and stealth enhance each of those respectively. There are also hybrid cards that feature enhancements for whatever build players have created and play to those strengths. Even those who seek a balance between all three will gain bonuses to that style of play, including lower equipment requirements to remove gear restrictions. It is an amazingly robust system and does not hinder trying new playstyles at any point in the game.

One area that stands out in Reckoning is the boss fights. These battles are often major affairs with lots of build up before culminating in an intense battle. The most impressive of these don’t take place until around midway through the game, but they continue on toward the end. The game’s combat system and player’s skills will really be put to the test. Often these will accompany major plot points, so the integration of story helps further heighten the experience. 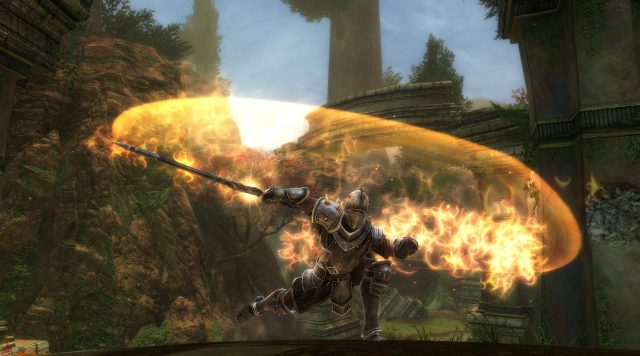 The game’s visual style is very much on the colorful, fanciful side, and it fits the world of Amalur perfectly. While not attempting a more realistic look, Reckoning flourishes in the bright and wonderfully animated fantasy setting. Characters, towns, dungeons, and enemies are all a highlight of the game, and there are many unique areas to explore and foes to battle. It is often enjoyable to simply stop and look around at the level of detail the world offers. Having enough options to create a unique and appealing character is a plus. Despite the look and animation being fantastic, there is noticeable pop-in at times, especially in the overworld. It’s not distracting, but happens enough to note.

Finally, it would be a shame to not take note of the game’s soundtrack. Former Rare composer Grant Kirkhope has crafted a collection of wonderfully appropriate pieces for Reckoning, and these are incorporated very fluidly into the game. From the lovely area themes to the intense boss music, everything fits to a tee. While the voice acting is very prevalent within the world and never seems out of place, the main characters don’t get enough exposure to really stand out.

If this franchise continues to have a single-player branch, and it has been unofficially confirmed to do so, a tighter narrative with greater character development and more impactful choices would go a long way toward making Reckoning into a more complete package. As it stands right now, the loot-gathering is outstanding and the combat, with the full character progression system supporting it, is faster and more responsive than any other RPG out there. Kingdoms of Amalur: Reckoning is great, especially for a first offering, but if Big Huge Games takes this game’s foundation and crafts something with a deeper, more involved story, the company will be a force to be reckoned with. 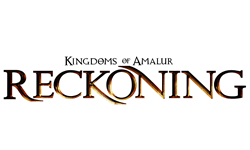