Once upon a time, Square Enix and Disney executives met in an elevator and had a conversation. The Kingdom Hearts series owes its existence to that meeting, and has remained a reliable cash cow for both companies. It’s too bad that the series is completely inscrutable by now, at least to someone jumping into Kingdom Hearts 3D: Dream Drop Distance with no knowledge of its predecessors. Even leaving the byzantine properties of its story aside, Dependable Dope Delivery left me feeling no inclination whatsoever to experience what came before.

Sora and Riku, veterans of other Kingdom Hearts titles, are instructed to obtain a new level of ability. To do this they enter a dream land composed of numerous worlds, and after progressing through them their abilities will have increased. Because of the dream land setting, their adventures through the subsequent realms have no real consequence and are promptly ignored after occurring. The blatant filler only ends with the final world, though making sense of what transpires there is a task for Kingdom Hearts veterans only.

No attempt whatsoever is made to turn this game’s tale into a self-contained story. The player is expected to know who these characters are, and the occasional supplements to the story serve more as reminders for the initiated instead of helpful courses for newbies. Constant references to events of other games are made that will baffle those who did not play everything else, and the result is a consistently mystifying tale that will clear up nothing for those who did not already know a great deal about the series going in.

The unique aspect of this series is its inclusion of copious Disney material, both in the back story and with the worlds that are visited. Disney characters employed in other Kingdom Hearts games get minimal screen time here, just enough to confuse a newcomer without actually resolving any of the perplexities, such as how Mickey Mouse is a king. The worlds Sora and Riku visit in their dreams are taken from The Hunchback of Notre Dame, Fantasia, Pinocchio, and Tron: Legacy, as well as Mickey, Donald, Goofy: The Three Musketeers. All these events take place in a dream land, allowing them to come across as filler, with Sora and Riku pretty much making the movies proceed as they originally did without any major changes. The characters from The World Ends with You have appearances that might matter if that game ever sees a sequel, but the Disney material achieves the usual function of dream sequences by being a bunch of padding. 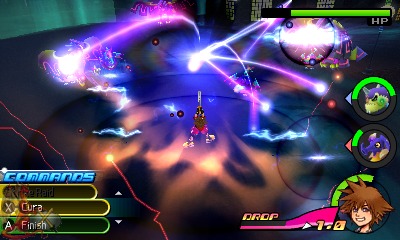 When every enemy uses the same basic color scheme, figuring out which is which becomes pretty challenging.

3D doesn’t even make good use of the Disney material for non-story purposes. Chernabog and Peg-Leg Pete make involving boss battles, but the only location which uses regular adversaries from its source is The Grid from Tron: Legacy. The game instead uses a menagerie of original creatures called Dream Eaters, and even though there are many different kinds, they all use the same darkened neon color scheme, imparting a sense of sameness to otherwise greatly varied locales.

Battles in this game follow an action RPG framework that is broadly similar to many other games. The player can create tame Dream Eaters to aid Sora and Riku in battle. The goal is to smack the enemies to death in real time, but this Kingdom Hearts adds the entertaining ability to make the characters ricochet from the surroundings in order to do harm. Using this mechanic is helpful because characters cannot be stopped until the ricochet action is complete, and these moves usually home on the very mobile enemies. Otherwise the fighting is fast-paced and solidly done.

Combat is unfortunately often rendered less pleasant due to a wobbly and spastic camera. For moving around the environments when no enemies are present it’s adequate, but once the player starts doing things in battle the view will spin around in a failed attempt to be engaging that simply disorients. Locking on to enemies is not nearly as helpful as it should be, since the camera is usually zoomed in so close that other enemies in the area will no longer appear. Trying to make it behave is an exercise in futility, and aggravation is a constant occurrence.

Instead of the protagonists fighting together, the game switches between Sora and Riku traversing the same overall worlds. A meter slowly depletes while playing as either character, and when it is empty the game boots proceedings over to the other protagonist. All enemies completely replenish upon the player’s return, even bosses, so often the shift to the other character is quite inconvenient. There are ways to extend the time left before dropping into the other character’s path, but the drop zone always seems to arrive when most inconvenient. 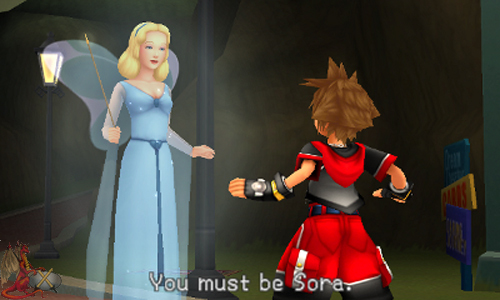 Ah, yes, remember this part of Pinocchio? Sure ya do!

Using items is considerably more complex than in most games, and not for the better. 3D puts all special combat actions, including spells and items, into a Deck that the player must arrange whenever enemies are not on the screen. This multitude of options cannot be applied except by using the Deck when the game is not paused, and doing so requires toggling through the options using the D-pad until the desired one is found. After using it, the game will automatically shift to the next action on the list. Switching among the options is merely annoying outside of battle, but trying to find exactly the right one when enemies are attacking is a recipe for considerable anger.

Square Enix’s developers are adept at making hardware produce snazzy visuals, and this game certainly shows what the 3DS can do, with character animation that is on the level of later PS2 titles. Some of the environments may not mesh very well with their decades-old Disney source material, but they look quite good on a purely aesthetic level. What 3D the game employs is fitfully entertaining but not worth the need to hold the system in just the right manner all the time. Also of high quality is the musical accompaniment, which is consistently strong and shows such a pleasant variety that it remains enchanting throughout. Certain highlights from the Fantasia score sound especially delightful, but regardless of their source these compositions are wholly worthwhile. The voice acting is mostly strong also, though certain battle quotes are overplayed quickly.

This Kingdom Hearts possesses a difficulty select upon starting, though the final battles present a noticeable challenge even at the lowest setting. Often making the proceedings easier to survive are the quick mini- and micro-games using the touch screen, which are well varied and quick to employ. They allow a few strokes of the stylus to activate various environmental effects that are sometimes necessary to progress and sometimes will simply slam the opposition around, being accessible and pleasant to use regardless. The descending shoot-em-up style activity that accompanies venturing to a new world is also rather entertaining, keeping such breaks from the regular proceedings enjoyable instead of the annoyances that so many Square Enix games employ.

I wasn’t really sure what to expect from 3D, having never seriously partaken of this series before. The experience, with its annoying mechanics and impenetrable narrative, has soured me on trying any more. Fans of other Kingdom Hearts titles will probably have a completely different reaction as they have already learned to cope with the mechanics and have some clue what the hell is going on. Absent from this conditioning, I find I have no interest in learning what else this series has to offer.