Inazuma Eleven vs. the World

Despite its Saturday morning cartoon style, Level-5’s football-RPG Inazuma Eleven series has provided entertainingly melodramatic story-telling and highly enjoyable gameplay to appeal to all ages, even those who may not be huge fans of the Beautiful Game. The second game, Firestorm/Blizzard, was one that was very much a superficial build on the first, successful at least partly due to its very entertaining story. Inazuma Eleven 3 attempts something similar, and while it remains just as fun to play, there maybe isn’t quite enough this time to distract from the feeling that most of this has been done before. Again coming in two flavours, this time titled Lightning Bolt and Bomb Blast, the game is a very satisfactory but by-the-numbers end to Mark Evans and company’s time at Raimon.

A few months after the unusual events of Inazuma Eleven 2, the creation of a new youth tournament, the Football Frontier International, is announced. The majority of the Raimon squad, plus a few returning opponents and entirely new characters, is quickly chosen to represent Japan, but first they must get through the Asian qualifying tournament. Compared to the first two games, the first part of the story feels very tame. There’s a small bit of intra-squad drama with a new coach and the squad selection, but it’s all resolved very quickly and the Asian opponents serve little purpose other than to walk away soundly defeated shortly after they appear. Fortunately, things pick back up in time for the FFI finals, where the series’ traditional melodrama and bizarre importance of junior football on world events begins to resurface. It’s still not quite as entertaining as that of the second game, but is more than enough to keep players interested and help set up key matches.

The game introduces a few new major characters, notably a new coach to cause some early friction with the squad and a new manager to give goalkeeper and captain Mark Evans yet another interested girl to be completely oblivious to. By the time the game ends the cast feels a little bit bloated, and while the charm is still there, there is considerably less chance for characters to shine or develop outside of a brief revelation. The British naming conventions, speech patterns, and accents for all the supposed Japanese players that started with the first game is simply shrugged off and just rolled with, although it’s amusingly to see them combined with names that are rather more reflective of the origin for most of the international opponents, coupled with random words or phrases frequently inserted to indicate that, yes, these people are from another country. 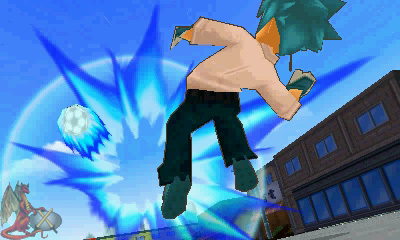 How not to save a goal.

There’s also a bit of disappointment that a potential story arc, hinted at various points, is apparently relegated to a single, easily missed post-game match. There are a few differences between the two versions, Lightning Bolt and Bomb Blast, the most substantial being short sections of the storyline that focus on captains of the Italian and Coté Victorie teams respectively, as well as the opponents in the aforementioned special post-game match. It is worth noting that while players do not necessarily need to have played the first two games to know what’s going on in Inzauma Eleven 3, there is an assumption that players know the happenings from the earlier entries and are already familiar with the returning cast.

On most levels the gameplay is identical to that of the first two games, so anyone familiar with the series will have no trouble figuring out what they’re doing. However, those new to the series may struggle initially with the “battle” system. The two types of football matches remain as they were before: random four-on-four battles with aims such as scoring the first goal or not losing possession, and the major eleven-a-side games that take place at key story points and in the optional competition routes. Both types are controlled with a top-down perspective on the touch-screen; players are dragged to move them to new positions and tapping causes the player in position to kick the ball towards that point. When shooting or coming into contact with another player, a basic instruction can be given (e.g. regular tackle or a slide tackle) or the player can consume some of his TP to use one of the ridiculously over-the-top skills that will usually guarantee a success.

There are a few updates and tweaks to the gameplay. Alter-egos are gone, a feature in Inazuma 2 that effectively allowed two players in one, but special team moves have been added in. These team moves can be activated in certain situations, for example the opposition having the ball in your team’s half, using up a team TP meter that generally allows for two or three of these moves per game. Other changes seem to have been made to the balance of the game. The first two games quickly became very easy on the story mode once players got the hang of what they were doing. This is still the case for the first few qualifiers, but the FFI finals seem to provide a more decent challenge. Part of this is due to what seems to be a more aggressive AI, which is far more prepared to use special moves and now actually substitutes players when they start to run out of FP and TP. Despite seeing few changes from the first game, the system still holds up very well and matches are great fun to play. It’s always a thrill to manage to get the ball from your end to the opposition’s with some silky play.

Outside of the matches, Inazuma Eleven is a basic RPG exploration experience, with plenty of random NPCs, equipment, and skill shops. The game is more than willing to state exactly where to go in order to advance the plot at all times. There is also a fair amount of side-content in terms of optional matches against the teams from all three of the Inazuma games so far. Even more teams and challenges become available after the twenty-hour main story is completed, although it’s debatable just how much this encourages further play time. 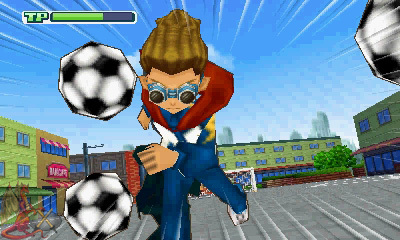 Unfortunately, multiball is limited to the special moves.

There’s a lot of opportunity to get caught up in creating the perfect squad, however, with over a thousand players available to be recruited to the Inazuma squad. Female players again appear, although much less frequently as opponents than in the previous game, which are almost exclusively all-male teams. The name-search recruitment for players met during random battles is gone, replaced by a capsule machine system, with different players available at each machine, although the requirement of defeating them in a random battle before they become available remains. Players can skew the “representing Japan” premise a bit when the finals begin, as the game starts allowing recruitment from the defeated teams in the Asian qualifiers (with players from opponent teams in the finals becoming available after the story is completed).

Inazuma Eleven 3 was originally released in Japan on DS, with the European release advancing to the 3DS. Expecting any visual upgrade on its predecessors will be met with disappointment, however, as the visuals are almost identical the previous two games. While it’s entirely understandable Nintendo would want to release the game on 3DS for marketing reasons, the series’ fans in North America certainly have cause for frustration at the decision. Generally, the visuals are perfectly fine but nothing particularly special. There are a decent number of brief fully-animated cutscenes and all the 3D rendered animations for shots, special moves, etc. look good and are highly amusing in how over the top they are, but the sprites and backgrounds used for both exploration and general gameplay are still very simple. Music is another area things are pretty similar. Yasunori Mitsuda’s score is just as catchy as before and fits the game’s cartoon theme well. Voice acting is again perfectly okay, but it’s too rare to be particularly noteworthy.

Inazuma Eleven 3 feels like a fitting end for this set of always absurd but highly entertaining footballing adventures. There still lots of fun, but it’s a second case of more of the same without the same level of amusing craziness that the story of the second game compensated with, and it’s hard to see where the series can build any further without some substantial overhaul. The decision to move on to a new generation for the next game of the series, Inazuma Eleven Go, could well breathe some new life into the series should that make it over, but this is a good time for this squad to move on.