Good ol’ Harvest Moon: it’s RPG comfort food and invites warm and squishy feelings on the inside. Not every entry captures this feeling, and the DS iterations in particular have been more miss than hit with Harvest Moon fans. Harvest Moon: Island of Happiness is the third DS title in the series, and despite sporting a lot of potential, it fails miserably on so many levels that even the most hardcore Harvest Moon fans tell people to avoid it.

Why does Island of Happiness have so much potential? Part of it comes from the story. Players take on a rancher who has shipwrecked on a deserted island. Greeted by Taro, an elderly gentleman whose family has also been stranded, he bestows upon the rancher an abandoned farm and a handful of seeds, and gives the task of populating the island with newcomers. As the game progresses, more people move to the island based on how well players build their farms. Plus, like every other Harvest Moon game, the importance of wooing a bachelor or bachelorette is still integral to how the game works.

Being able to populate the island and trying to transform it into a paradise is a noble goal, and it’s the largest part of what gives this game a bit of shininess. Although there is a collection aspect to the game, it’s done through the luring of people to come and stay on the island. Most of them may be faceless, but the unlocking of new residents allows the story to grow and and expand, though not by a huge amount. Although Island of Happiness sports an interesting concept, the plot itself is bare-bones, and the potential the story has is poorly implemented. This however, is where all of the game’s minimal praise ends, as this game is plagued by one aspect that destroys all the potential Island of Happiness had for being a top-tier Harvest Moon title: sloppy, stylus-only controls. 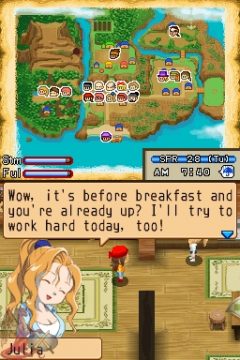 Makes me wish they had worked harder on this game…

How could this one aspect destroy the entire game? It’s simple: they are so poorly implemented that players will have to fight with them in order to perform specific actions. Farming, once such an easy task, is now made difficult due to the controls. Players must poke the stylus where they want to perform their task, but it’s not particularly responsive. It doesn’t help that in some cases trying to tap the right area for crop watering results in dowsing areas everywhere but on the right field. Part of the issue comes from the fact that it’s extremely difficult to line up the cursor with the item that is intended to perform an action on. Often the character will perform the intended action, but not in the correct place. These careless controls are something players will have to fight with, and truthfully, it’s not worth the battle.

These sloppy controls suck any possible enjoyment out of Island of Happiness, as they factor into every task that must be performed. There is no way to switch them to a D-pad, and it makes trying to get through daily tasks more of a chore. Sure the game has its usual forays of mining, fishing, and farming, but the touchiness of the controls usually work against the player, eliminating the potential joy provided by these games.

It also doesn’t help that the game’s weather system is an utter mess. Since Island of Happiness uses the Farming Degree system for ranking, the challenge level has ramped up quite a bit. However, considering the sporadic weather, it often makes producing the finest crops that will sell for worthwhile prices quite difficult. Couple this with the terrible controls, and it creates a disastrous experience.

Harvest Moon: Island of Happiness is a game that requires the patience of a saint considering how long it takes to perform various tasks. This is the first instance of the new Wonderfuls system, which takes a bit of getting used to. There are seven Wonderful coloured stones, each of which enhances the farmer’s tools. Wonderfuls are particularly useful as a way of performing chores a lot faster, or helping to reduce the amount of stamina it takes to do something. However, the bonuses of the Wonderfuls aren’t always that noticeable, and familiarization with them requires a ton of patience. It also doesn’t help that the only way to increase stamina is by having special accessories crafted. Further aggravation arises from losing stamina simply by running around town without doing anything of note, although balancing stamina and fullness isn’t as challenging as it is in other Harvest Moon titles as it simply requires players to eat a meal and sleep the days away. This, evidently, might not be such a bad idea. 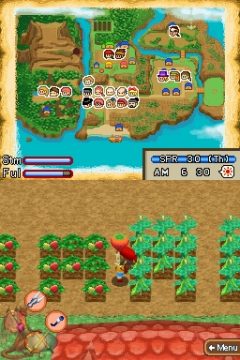 If only the controls weren’t so sloppy, farming would be ever so fun.

While some mini-games have been included in terms of animal care, they are mostly just filler that really don’t add to this already shoddy experience, along with requiring even more stylus use. The same sentiment goes for the interactive festivals, which have been reduced to mostly stoic scenes because it’s simply not worth the effort to participate in the stylus based mini-games considering the lousy control set up.

The only other area outside of the game’s potential story where Island of Happiness stands out is in its graphics, which are as cute as a button. Character portraits have multiple faces, and the sprite graphics are round, colourful and adorable. Much like its sister game Sunshine Island, the graphics are solid without pushing the hardware. The music is also quite decent, through mostly forgettable, with the exception of Shea and Wada’s standout theme that is probably the best composition heard in the game. The majority of the soundtrack is pleasantly harmless, and the animal sounds are well done.

Harvest Moon fans should feel completely outraged by the sloppiness of such an unrefined game. There’s simply no excuse for such horrendous controls and terrible interaction overall. It’s an even bigger shame considering the potential the story had and the mechanics it was attempting to introduce. Thankfully, this game has been mostly forgotten by fans, and rightfully so, since Harvest Moon: Sunshine Island released a year later and fixed nearly every issue from Island of Happiness. Avoid this one like the plague, as it is more an island of lies than a paradise of happiness.