A limited edition for Natsume’s Harvest Moon: One World is now available to pre-order in North America. The edition is available through NIS America’s online store priced at $79.99 and contains: 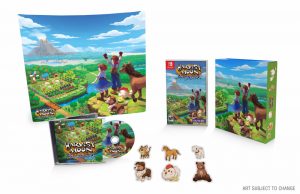 Harvest Moon: One World is set in a world where produce such as strawberries, cabbages, and tomatoes no longer exist, with knowledge of them only found in an old book. Upon discovering the book, players set out on an adventure covering multiple regions including beaches and snowy mountains. The game, which is being worked on by Natsume and Rising Star Games, is planned to release sometime this fall. A chicken plushie will be available with pre-orders from certain retailers, but is not included in the limited edition.