Normally when I pick up a random game from the bargain bin over here, it’s something that no one’s ever heard of and which never left Japan. Imagine my surprise when I discovered that the cutesy RPG Knight & Baby had actually made the jump across the Pacific, to be localized under the title Guardian’s Crusade. Despite its relative obscurity on both sides of the ocean, this appears to be a rather polarizing game, with online opinions running the gamut from “excellent” to “waste of junk plastic needs to be melted.” I’m leaning more towards the former, personally.

The game’s opening video sequence features a harried stork carrying a bundle through a typically dark and stormy night. Suddenly he is beset by marauding demons, and in the confusion everyone gets zapped by lightning. The bundle falls to earth, lost but not forgotten. This is where the hero comes in. Knight, whose name really should have been altered during localization, is a young man from a mountain village. While returning from an errand to the nearby port town, he and his fairy sidekick Nehani come across the bundle’s contents: a pink, pig-like hippo-thing, which they dub Baby. Not long after that, a mysterious apparition requests that Knight return Baby to the Tower of God on the far side of the world.

The story takes a few good twists and turns, but largely sticks close to its primary objective. The handful of major NPCs have their own defining story arcs that fit within and behind the scenes of the main plot, and the complete picture comes together in a most satisfactory manner. It’s not the deepest story, nor is it the most complex, but it fits the game like a hand in glove.

One interesting thing to note about Guardian’s Crusade is its overworld. With the exception of dungeons and the interior of individual buildings, this game presents the player with a single, seamless, and contiguous field of play. This remains true even as sea and air transport become available. Background music fades from track to track as the player enters specific zones, but there’s no lag or load times present during regular exploration. On the downside, the developers didn’t go as far as they could with this. There are numerous dead-end routes that could have been home to hidden treasure or other secrets, but as it is the game features only one completely optional dungeon, though a few others can be accessed well ahead of when they’re actually completable. Finally, the flying ability is possibly the slowest version of aerial transport ever to grace an RPG. It’s still faster and handier than walking, but the speed and lack of map reference while airborne make it more annoying than it should be. 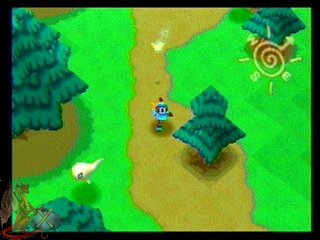 Enemies appear on the field as funny little ghosts, and combat only begins when one of them comes in contact with Knight. There are three forms of ghosts, and their appearance is dependent on the average level of both Knight and Baby. Monsters that are about the same level or a little stronger than the titular duo will appear slightly pinkish and will chase them on the field. Enemies that are much stronger sport fierce red eyes and are larger than normal. Weaker enemies are pale little things that run away whenever they see Knight in the field. Generally it doesn’t take much to level Knight and Baby to a point where the surrounding monsters all try to flee, so with a little effort exploration becomes a lot easier. There are a few specific areas of the map, generally accessible only by air, where the monsters will always scale to higher levels than the heroes, should the player feel like having fun with the combat.

Knight is the only controllable character in the game, but he’s not the only fighter. Baby joins the fray a little while into the plot. While his actions are largely random, the pool of possible choices can be directed through simple AI commands in battle, so it’s actually easy to get him to do things like healing when necessary. The little guy can also learn to transform into various monster shapes, and will do so randomly in battles. If Knight can keep up the friendship level by giving Baby treats, talking to him regularly in battle, and not letting him faint, then eventually “Transform” will show up on the AI command list, allowing the player to make these events slightly less random. Unfortunately, Baby’s friendship level is a hidden stat, so the player will just have to guess at it. Still, the little pink dude pulls his weight, unlike Nehani the fairy, whose attack and healing skills are as infrequent as they are pitiful 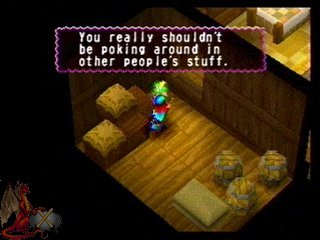 Nehani’s got a point, Knight.

Supplementing the combat are the living toys. These vaguely ovoid automata are scattered across the land, and come in a wide variety of types ranging from “overpowered” to “inside joke.” A few have uses outside of battle, but most are summoned by Knight to aid him in fights, and come in three groups. The first are essentially AI teammates, taking up spots on the field of battle while attacking or providing various effects. The toys of the second group are single-use per battle, and usually have strange skills that affect everyone. The third group, comprised mainly of healers and status-affecters, can be used over and over, but require PP (puppet points) each time. With seventy living toys out there, the variety of strategies is surprisingly vast. There’s a toy that prevents all physical damage for three rounds, for example, and another that explodes violently if not destroyed by the enemy in that same timespan. One toy doubles the attack power of everything on screen, which raises the stakes for the player but also the level of hurt for the enemy. There’s a toy that just gives a running commentary of the fight and is otherwise useless… unless a certain other toy is used that will sacrifice the commentator in exchange for raining massive damage upon the enemy side. The only limitation is that Knight can have only three living toys active at a time, so if all of the party member slots are filled then he cannot summon up a healer at all.

For the most part, the graphics are surprisingly good for a polygonal 3D PlayStation title from before the turn of the century. The towns and field areas are a little blocky, but otherwise are quite detailed. The character models suffer a bit, at the best of times keeping that sort of plastic, claymation feel common to PSX 3D. At the worst of times they look like something produced by Jim Hensen on a bad day. The bosses, on the other hand, get to be pretty awesome by the end, with some nice animation in their attacks. Taking the period into account, the FMV sequences are good, if not up to Final Fantasy standards. Then again, this game was certainly not made on an FF budget, so kudos to the graphics guys for doing as well as they did. 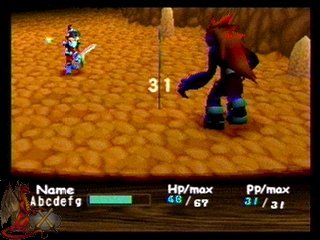 Is it just me, or does that look like a Zoroark?

Musically, this game is heavily and obviously inspired by the work of Squaresoft’s Uematsu et al., which isn’t necessarily a bad thing. While Guardian’s Crusade lacks any stand-out tracks, the regular music complements the game marvelously during exploration and combat. Aside from Baby’s occasional vocalizations, the game lacks voice acting, but then again it doesn’t really need any.

Unlike most games I review, this one actually had a foreign release, and is available in English, French, and a few other languages. I cannot speak for the state of the localization, though online FAQs make it obvious that a majority of the character, toy, and locale names were heavily altered from the original Japanese. My sources indicate that the English localization was a little spotty at times, with some obvious errors and at least one mislabeled item. However, given the relative innocence and simplicity of the plot, it’s hard to see how the translator could have rendered it completely incomprehensible. Anyone playing this in English should expect some cringeworthy errors, but nothing crucial. As for the Japanese version, it’s got a fairly low reading level. There are no kanji at all in this game; everything is in hiragana or katakana, with regular spaces between the words, so anyone with patience and a good dictionary can wade through it without too much trouble.

At an easy twenty hours or less to complete, Guardian’s Crusade is a fun romp through a fairly typical RPG world. While it doesn’t get everything perfect, when it hits the right notes it does very well for itself. It’s not an exceptional game, but it’s certainly not the pile of garbage some reviews have made it out to be. I’m happy to say that I enjoyed it, flaws and all.