Set Sail to the New World of Teer Fradee

Developer Spiders has been creating lower-key RPG releases for a while, which have been generally met with mixed receptions. However, it has not let that get in the way of its determination to carve out a niche in the gaming sphere. Spiders has kept at it, often bringing plenty of interesting ideas to the table, and its most recent title, GreedFall, is its strongest effort to date.

Players take control of De Sardet, a diplomat who ends up as the leader of a group unfolding numerous mysteries. De Sardet can be male or female and the character customization system, while not robust, is decent enough to make a good-looking protagonist. De Sardet is part of the Congregation of Merchants, one of the factions colonizing Teer Fradee, the island players set sail to. The people of the continent are dying of an incurable disease called the Malichor and the leaders of its trio of main powers believe that there is a cure to be found on Teer Fradee. De Sardet is the Legate for the Congregation, as he or she will tell the NPCs over and over again, with their cousin Constantin taking on the role of governor, tasked with establishing friendly ties with other groups, including Teer Fradee’s natives.

Set in a fantasy world inspired by the colonial era of history, GreedFall provides a very interesting setting. After an initial introductory chapter on the mainland, GreedFall sends players off to the new world, where a familiar story structure unfolds. Each of the story’s factions are fleshed out with clear objectives that influence the way they interact with Teer Fradee’s natives. Each of them play an essential part in a complex story about religion, colonization, politics, and worldly conflicts. This involves talking to NPCs for hints until the trail leads to a resolution, or often a greater conflict. Fans of mystery narratives will enjoy the setup, but those who want to get to the action quickly will feel impatient with the drawn-out storytelling. Fortunately, reaching the conclusion of these chapters is rewarding and there are plenty of scenes that tug at the heartstrings. GreedFall’s worldbuilding is excellent. 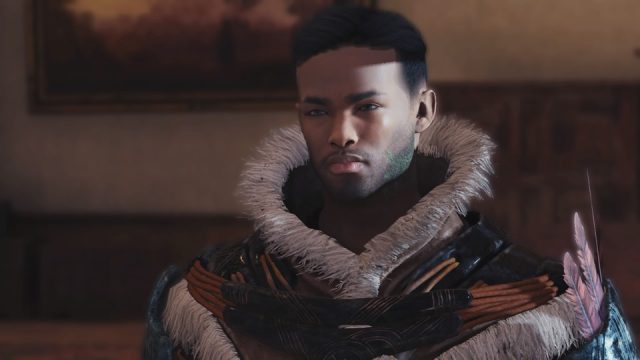 In GreedFall, you play as the diplomat De Sardet. Customization is limited but still satisfying.

The story does fall into the “colonialism versus the natives of the land” narrative trope, and therefore it may be hard not to sympathize with the natives, especially when it is clear that even as a well-meaning colonial detective, De Sardet is still part of the bigger problem. Spiders deserves some kudos for how it handles the colonialism conflict, as the game attempts to address these issues and the endings do try to vary the outcomes.

Though customizable, De Sardet doesn’t feel like a blank slate. At the very beginning of the story, players get some good establishing moments with De Sardet’s ties to Constantin, their mother, and Kurt, a romance option for female characters. The story works well by being character-driven and highly personal, particularly as it reaches its culmination. Both male and female De Sardet feature good voice work, with lines delivered with a wide spectrum of emotion. In general, the voice acting is well done for many of the major characters and helps to bring the story to life.

GreedFall takes on a hub-like design that is reminiscent of Dragon Age: Origins. Players visit pretty much all the locations through the questlines and some of them are breathtaking. The woodlands have a fall aesthetic, and it’s highly enjoyable to crunch through the yellow leaves, watching the sun dip away in the game’s day and night cycle. Other locations include ruins, caverns, and marshes. However, while well crafted, the budget limitations become noticeable; many of the assets are reused in different locations, especially the buildings, which very often share the exact same layouts. All the areas are accompanied by atmospheric music. Towns feature more industrial instrumentation while the open lands feature a more tribal sound. Composer Olivier Deriviere’s work on GreedFall is reminiscent of a sweeping film soundtrack.

GreedFall’s combat is closest in style to that of the Witcher series, with players dodging and parrying their way through it. The combat system is tactics-heavy and challenging, though players can change the difficulty at any time. Combat happens in real time, but has a pause feature so that players can take a breather and figure their way out of a sticky predicament. After choosing one of three starting specialisations, players will gain enough skill points from levelling up to branch into others, which helps make De Sardet feel personalized. GreedFall doesn’t give out skill points freely, but if a player happens to not like their current setup, the game gives out items that allow them to respec De Sardet at convenient times in the story. 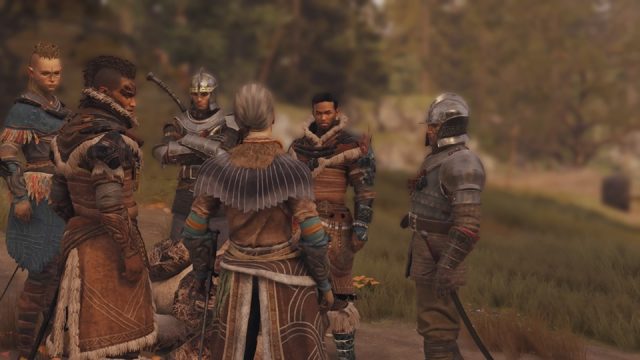 GreedFall is a story-driven adventure. Expect to spend a lot of time talking to others and solving mysteries.

GreedFall is pretty polished but there are still quite a few issues. There are many typos in the subtitles, which become distracting. The cape physics are a bit off and during cutscenes De Sardet’s cape often crumbles up between their legs, with the design upon it sometimes flickering or becoming a garbled, pixelated mess. Even without these problems, it would also have been nice to have an option to hide the cape and head gear for aesthetic purposes. Regardless of these issues, GreedFall has a nice selection of armor sets, which add to the customization of De Sardet.

One thing that GreedFall does better than many of Spiders’ previous games is quest building. All of the major main and side quests play a significant role in the story or building up the world, and though there are some typical fetch quests, they’re completely optional. The companion quests become surprisingly intricate, and while at times being subjected to the talking-heads-style narrative becomes a bit dull, the game always provides good reasoning for players to go to do something. 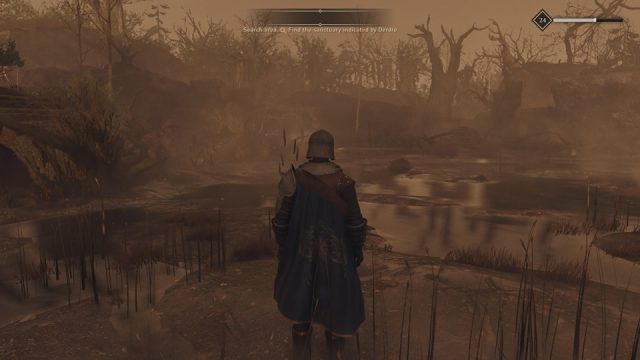 GreedFall’s landscapes can be lush and breathtaking but also grim and moody.

Spiders put a lot of attention into GreedFall’s crafting system and it makes running around, collecting items, and picking up drops from enemies feel rewarding. There are quite a few things to create and play with, and crafting armor feels far more worthwhile then going to the merchant to buy it. The game also encourages players to prepare for upcoming situations, especially for boss encounters, where they will often scramble.

One big letdown with GreedFall is how underused the companions feel to the overall experience. They add their two cents’ worth during missions, but it doesn’t feel as organic as other companion systems are. This includes combat, especially on the higher difficulties, where they feel more like a distraction for enemies than a coherent squad. In some fights, players feel better off alone, dodging the boss in a circular fashion, chipping away at their health, until ultimately they win. There are four romance options for De Sardet (though one is locked out for each gender choice), but those who are looking for something on par with The Witcher 3 or Dragon Age: Inquisition will feel a bit disappointed. This doesn’t mean that the overall experience is empty. There are some genuine moments between De Sardet and other characters, especially Constantin, but it’s just not as extensive as it could’ve been.

Ultimately, GreedFall is another step forward for Spiders and is its strongest entry to date. Its previous releases may elicit some skepticism, but GreedFall, while not perfect, is a welcome addition to the gaming canon. It is a fine example of what smaller developers like Spiders can offer to complement the other experiences out there. Even with its faults, RPGamers should welcome GreedFall into their personal collections.