Not Quite a Michelin Star

With the 2016 releases of God Eater Resurrection and God Eater 2: Rage Burst, Bandai Namco firmly established the series as the biggest competitor to Capcom’s Monster Hunter. However, while Capcom took the opportunity of not being burdened by the restrictions of handhelds to produce Monster Hunter: World last year, Bandai Namco’s corresponding effort comes off as a comparatively disappointing by-the-numbers follow-up that neither inspires fans or those coming into the series for the first time. While God Eater 3 retains much of what made the previous entries enjoyable, it neglects to advance them.

God Eater 3 effectively throws away most of the events of the previous titles, taking place some years after and moving events to an unspecified part of northern Europe. Fenrir — the organisation fighting against monstrous beings called Aragami that have destroyed human civilisation and taken over the planet — is no more after a second apocalyptic event that has caused even more dangerous environments called Ashlands to appear and expand across the globe. It has been replaced by Gleipnir, though there’s not much new here as it ostensibly is attempting to do the same thing. The main difference in setting is that now God Eaters, soldiers who can fight back against the Aragami using large weapons called God Arcs, travel around on mobile bases called Ash Crawlers between the remaining safe heavens known as Ports. 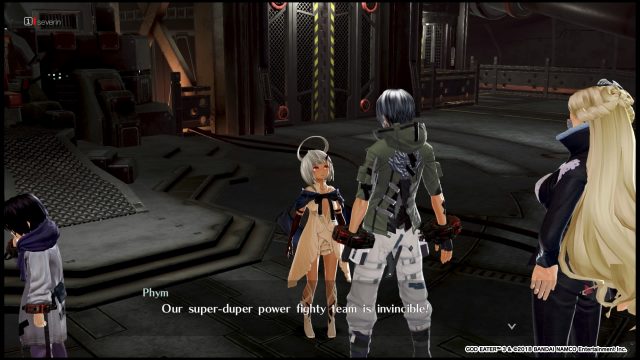 Phym is the best singular thing about the game.

Players start out as an Adaptive God Eater, a new type able to fight against the Ashborn Aragami that have emerged with the Ashlands, who is indentured to their home port along with a few allies. After earning what amounts to as much freedom as one may be able to have in this world, the AGEs team up with the owner of another port and strike a deal to work with them. All of the overall plot aspects will be highly familiar to anyone with much interest in JRPGs or anime, as numerous tropes come up and are apparent from a mile away. The overall plot, which involves a humanoid Aragami named Phym who basically takes on the same role that Shio had in the very first game, does little if anything to expand on the setting or provide any satisfactory answers to any of the questions it brings up, while neither Gleipnir nor another faction that appears in the game do much to justify their goals or methods.

Where God Eater 3’s narrative deserves credit is in the personal stories of the player’s allies. Each of the fellow God Eaters, who are notably less in number than in previous games in the series, and a few of the other NPCs in the Chrysanthemum Ash Crawler get interesting and emotional, but brief personal story arcs. Most worthy of note is Phym, who is a delight despite effectively being a copy of Shio. She immediately attaches herself to the player, following him or her around and calling them Daddy or Mommy, and quickly forms strong bonds with all of the other characters. Phym acts as a great catalyst for many of the game’s emotional and heartwarming moments and almost single-handedly keeps the story from becoming entirely forgettable.

The game flow will be highly familiar to fans of the sub-genre as players go through various ranks of missions, including numerous optional ones used primarily to help gain additional materials to craft and upgrade gear. Materials are attained in a multitude of ways, such as mission rewards — more given for hitting certain achievements such as finishing within five minutes, not needing to be revived, etc. — or by devouring them from fallen enemies. There’s a nice selection of gear, with plenty of different weapon types with accompanying differences in how they handle, including two new melee styles and a new laser gun type, all of which are highly enjoyable to use. Players will want to cultivate a decent selection of equipment and be familiar with a least a couple of weapon styles, as there are three physical and four elemental damage types, which are more or less effective on different species of Aragami. The bullet creator also returns, though in God Eater 3 it’s easy to get through the entire game without having any reason to touch it. 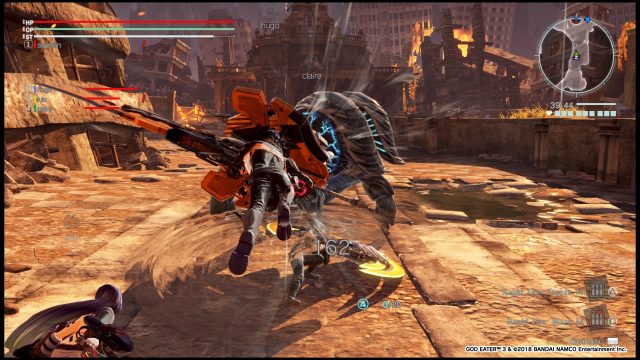 The new Heavy Moon weapon type is a lot of fun to use.

Combat in God Eater 3 is virtually identical to the other games of the series. Players are put on a map along with up to three allies — AI controlled or in online co-op — where there are enemy Aragami to defeat. The action combat encourages a fast-paced back-and-forth as players rush in to attack in the brief windows between enemy attacks. The God Arcs can switch on the fly between melee, gun, and shield modes, though as the Oracle Points used as ranged ammo are limited and most easily replenished by unleashing melee attacks, the majority of time is spent in close quarters. That said, managing to unleash a well-timed ranged barrage can be incredibly useful. The game does a fine job instilling a mixture of tactical thinking, awareness of the battle situation, and identifying the tells of when and how Aragami are going to attack.

In addition to the standard ground and aerial combos, players can also use their devour ability to provide a limited-time power-up. God Eater 3 gives Burst Mode a more apparent effect as there are now certain special abilities that can be equipped and will activate when in Burst Mode, such as an upgraded ground attack move. Players can also unleashed Engage links with their allies once a meter is filled up, which provide a passive bonus for a limited time; for example, linking with Phym will cause health to steadily regenerate. These additions are welcome, but simply mount to being minor tweaks as opposed to anything that marks a significant improvement or alteration to the battle system. It’s still strong combat, just a lot more of the same without anything substantial to excite returning players.

There are a couple of new enemy types but the biggest change are the new Ashborn Aragami. These are dealt with in much the same way as other types, though, like the player, they have the ability to devour and enter Burst Mode. This puts them very much on the offensive and in a highly dangerous state in which a single attack will easily take out half of a God Eater’s health bar. This helps switch up battles, requiring players to think about defense and evasion first and foremost until the Burst time is over, whereas they spend most other battles on the offensive. God Eater 3 also introduces a new set of missions titled Assault Missions, where up to eight players join forces for particularly tough battles with a stricter five-minute time limit. 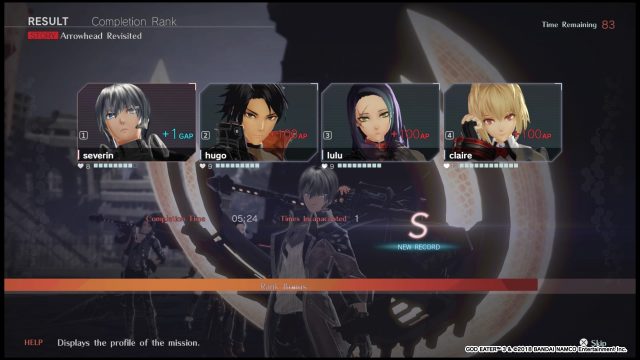 Post-mission rankings seem to like being positive, as S rank is the third-best rank one can achieve.

The environments look somewhat interesting at first glance, but as all of them follow the same general look of ruin and destruction, there’s nothing that helps to make them memorable and by the end of the game players will have completely lost any interest as they are recycled again and again. The combat animations, however, are strong, and the game flows nicely with no noticeable slowdown even when there’s a lot going on. The larger roster also means there’s a bit less enemy recycling than in previous entries, and less need for palette-swapping to create new foes, though both are still present to some extent.

Go Shiina returns to compose the soundtrack, which is one of the series’ strong points. God Eater 3’s score doesn’t quite reach the level of God Eater 2: Rage Burst’s and seems to lack some of the more distinguishing elements that made its predecessor stand out on the musical front. Nevertheless, it’s still highly enjoyable to listen to and the audio complements the action well. The voice actors do with the writing presented without any major complaints; one thing that is a positive is the chatter from the party during combat, which provides some useful reminders and cues for things going on, such as when the enemy is about to attempt to devour or the player is running low on Burst time. Once again, the player-created protagonist is silent except for their in-battle communications, though the game handles it as well as it can, using his relationship with his allies to good effect and giving them the opportunity to respond with some single-line statements.

God Eater 3 is certainly not a bad time, and there’s easily thirty hours of enjoyment to be had going through its seventy story missions along with all of its optional missions, including several challenges unlocked once the credits roll. However, coming into the context of Monster Hunter: World doing so much to advance its series, God Eater 3’s approach of simply offering more of the same without doing anything to expand on what made it such a strong challenger is a disappointment. It still has its positives, but they’ve all been seen before.