While Conquest is meant to be a facsimile of Fire Emblem titles before Awakening, and Birthright much more in line with said game, Fire Emblem Fates: Revelation is supposed to walk the line between them in terms of gameplay and difficulty. It even tries one or two new things not seen in any previous game. However, Revelation is also meant to be supplementary to the two main campaigns, available as either downloadable content or included on the cart for the Special Edition. While it could stand on its own, it would do so awkwardly and it is best played after one, if not both Birthright and Conquest.

Though Revelation begins with the same five rushed chapters that the other two campaigns do, by the deciding point the player’s Avatar cannot bring themselves to side with Nohr, the country they were raised in, or Hoshido, their birth nation. Though details on what happens afterwards would spoil too much, it is not hard to guess that the Avatar and secondary character Azura must convince characters from both Nohr and Hoshido to join them in facing the true enemy. The game’s plot is fairly straightforward, if a little too fast-paced. Also, despite filling in details left out of the other two routes, the big threat barely hinted at in Birthright and Conquest seems underdeveloped. In spite of it being constatly name dropped, it does not make an appearance until the very end. It takes a pair of DLC maps to more flesh out the adversary.

Although there are a few surprises, what carries the story is actually the interaction of the royal siblings from Nohr and Hoshido with the Avatar and other plot-important characters. Their differing personalities bounce off each other well, and it is fun and engaging to see these rivals fight together and exchange banter. They also make the cast seem larger in comparison to past games in the series, since not all characterization and interaction is relegated to support conversations. It is certainly not as strong as Path of Radiance or Radiant Dawn‘s stories, but Revelation‘s tale is still decent and keeps player interest until the end of the game. The localized script is as strong as it has ever been in a Fire Emblem game, though it is different in a hard-to-describe way from Shadow Dragon and Awakening. Serious scenes and comedic moments alike come across as they should. 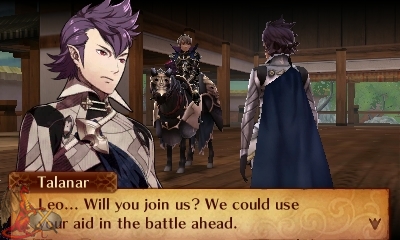 Not for a few more chapters

The Fire Emblem series is better known for its combat than its plot, and Revelation is no exception. Fates not only changes up the battle system, but Revelation specifically makes its maps more puzzle-like than in earlier games. The combat resembles that of previous titles, with units being moved around on a map to exchange quick, turn-based blows. The Weapon Triangle, which previously consisted of swords beating axes, axes beating lances, and lances beating swords, has been revised and now consists of six weapons in three groups of two. Swords and tomes now beat axes and bows, axes and bows beat lances and shurikens (weapons used by ninjas, butlers, and maids), and lances and shurikens beat swords and tomes. Although it may take a little while to memorize the changes, the revised triangle does more to balance weapons and classes. Weapons also no long break after a set number of uses, which was a source of annoyance in other FE games. As a counterbalance, traditionally strong weapons now have steep penalties, such as lowering stats after use or being unable to counterattack. In addition, there are two newish battle mechanics called Attack Stance and Dual Stance. Attack Stance is similar to Dual Strike from Awakening and involves two adjacent units striking the same target. Attack Stance differs from Dual Strike in that the the support unit will always attack, but also do half normal damage. Dual Stance is similar to Pair Up and involves both units occupying the same space. The supporting unit can no longer attack, but they will protect the main unit in predictable ways. Enemy units can also use these stances, making them trickier. All of this makes outfitting units before a fight all the more important and careful thought needs to be taken during the battle itself, as it should be for a strategy RPG.

To elaborate on the battle maps, Fates introduces triggers called Dragon Veins, which the Avatar or another member of Nohrian/Hoshidan royalty can activate. These create a variety of effects that can turn the tide of a battle, or possibly hinder players if they are not used at the right time. A number of Revelation‘s maps use Dragon Vein as part of a minor puzzle. In one example, the army needs to navigate through a building with moving rooms in order to activate three Veins and unlock the room to the boss. Even without the Dragon Veins, there are still unique maps designs, such as one in which units need to break through a thick sheet of ice in order to complete the battle. None of these puzzles are difficult, but they do make reaching objectives more engaging. Fire Emblem combat is as fun as ever, and while Revelation is not as difficult as Conquest or other FE titles, many of these maps are a first for the series and quite enjoyable. After how unbalanced Awakening was and uninspired its main story chapters, the more nuanced combat and maps of Fates, Revelation included, is very much appreciated.

Though the majority of Fates will be spent in combat, there is a customizable base of operations known as My Castle, where the army will go between chapters. Various activities can be performed here, such as speaking to and interacting with characters, buying and forging equipment, outfitting units, interacting with StreetPass avatars, and setting up structures to defend the castle during invasions. This is also where Fire Emblem‘s signature support conversations occur. Like in many earlier games, characters can build their affection with each other during battle, then speak to one another after enough points have accrued, often revealing things about their background and personalities. The conversations are just as enjoyable as they have been in previous games.

Like in its immediate predecessor, supports that reach up to S have the characters fall in love and marry. Their children, who inherit the parents’ stats and skills, can then be recruited in Paralogue chapters. It is blatantly obvious, however, that this feature was put into Fates due to how popular it was in Awakening, regardless of how much sense it makes. The second generation characters have no presence in the story whatsoever and the explanation for how they appear in the first place is, to be frank, ridiculous. Ironically, the fact that the plot ignores the children is to the game’s benefit, as if it is saying that they are just a bonus and do not exist as far as the story is concerned. Even if the childern don’t take the player out of the game, it does not change the feeling that they were shoehorned in, however. 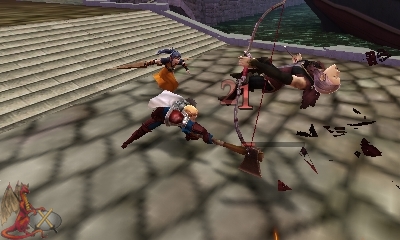 Fates‘s graphics engine is based on Awakening‘s, and while the visuals are not the best the 3DS can muster, they manage to outdo said game. The character models have more realistic proportions, the battle animations and effects are more detailed and flashy, and there are more FMV sequences than in Awakening. There is also a very neat effect during battles in which the camera zooms into a fight between units instead of cutting to it, with details such as placement of objects on the overhead map persevered. Character facial expressions during cutscenes are a little stiff, but are much better than in Awakening.

Revelation includes music from Conquest and Birthright, as well as several unique tracks. The music corresponding to which nation is easy to pick out, as Birthright uses instruments from feudal Japan while Conquest employs woodwind instruments and bagpipes, giving it a slightly Celtic sound. The soundtrack may not the best on the 3DS, but it is still great music and rather pleasant to listen to. Voice acting is once again relegated to short clips during the story, battle exclamations, and FMV sequences, although characters say more phrases compared to Awakening. The vast majority of the voice work is excellent and serves its purpose of giving the characters more personality. Given the large amount of units and NPCs in this game, however, the few poor performances that there are can be excused.

Nintendo and Intelligent Systems’s decision to make Fire Emblem Fates three separate campaigns is still a controversial one, and it is difficult to say how successful it is. The Revelation route does have enough ideas and unique aspects that had it been developed by itself and expanded upon, it would have made a strong singular entry in the franchise. Of course, the same could be said for Conquest and Birthright. Regardless of what-ifs, Revelation does its job well as the game half-way between the two main campaigns that answers unexplored questions. I can’t help but wonder how future games in the series will be handled, but regardless, I greatly enjoyed Fire Emblem Fates, Revelation included.