The Imperial Senate Will Not Stand for This

Final Fantasy XII unfortunately inaugurated the modern Square Enix practice of stupefyingly long development cycles for the series, taking a then-unprecedented five years to see completion. XII also suffered the grievous misfortune of its original director, Yasumi Matsuno, departing in the middle of development. The finished game shows the signs of this backroom turmoil if one looks, and its story in particular does not achieve all that it could have. The game as a whole is nevertheless a testament to what Square Enix’s resources can create, deploying an ambitious title that works so well in many aspects that its flaws are easily excusable.

Final Fantasy XII begins with the conquest of Dalmasca, and its king’s assassination, by the Archadian Empire. Fast forward to two years later, and the story picks up by following a young Dalmascan patriot named Vaan as he goes from resigned acceptance of the occupation to determined resistance. His struggles are quickly made more threatening when additional characters appear, including someone whose death rumors were greatly exaggerated, Dalmasca’s princess Ashe. The quest to start a successful resistance against Archadia takes center stage from there.

The plot seems to be trying for a multifaceted approach that gives even its antagonists recognizable motivations for their actions, but the effort is spotty and mostly abandoned by the game’s midpoint. Early scenes away from the protagonists that attempt to display Imperial actions in a similar vein as that Matsuno used for Final Fantasy Tactics are never given the context and follow-through to make them achieve that goal, and the attempt to craft a believable final antagonist is similarly not granted the screen time it requires. Without Matsuno’s guiding touch through its entire development the core of XII‘s tale comes across as yet another entry in the evil empire rogue’s gallery of JRPGs, and with unmistakable aspects lifted from Star Wars and The Lord of the Rings. By the standards of other rebellions against empires in the RPG world Final Fantasy XII is nevertheless decent, but the potential to be more was removed when Matsuno left the project. 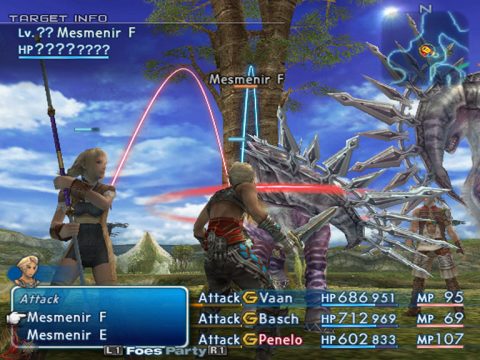 Ah, the Mesmenir in its natural habitat. Such a majestic creature.

The story as a whole may be derivative, but some of its characters are appealing enough to keep player interest going. Once the sky pirate Balthier enters the picture his laconic and amusing personality gets most of the best lines the script has to offer, and his endearing presence steals the show frequently. Square Enix’s localization effort is also very well done, ensuring that the dialogue is literate and the text interesting.

Breaking from every other title in the offline Final Fantasy series, XII has no transition to a separate battle screen with which enemies are engaged. Instead the various forms of opposition can clearly be seen wandering the game’s environs while the protagonists explore, and will wander over to attack the player’s party when the opposing groups close in. The simplest means of dealing with this onslaught is for the player to open the combat menu and have characters attack their foes until one side is dead. Fortunately the game has a method of cutting down the number of button presses that must be made.

The Gambit system allows the player to immensely decrease tedious button pressing by giving the characters instructions to act according to specific circumstances. Initially the options are rather limited, but they still allow the repetitive busywork of slaying regular enemies to be accomplished without the player constantly needing to select the attack option. As the game progresses and the full multitude of available Gambits becomes accessible, it becomes quite possible to point the party toward pretty much any opponent and watch it be eviscerated with no additional input. This automation of what would have been very tedious is a definite plus, and the player is always free to interrupt the character actions in order to direct them differently.

Gambits do have their limitations, principally the inability to keep several variants available for different situations. Instead the player has to alter the choices manually every time something comes along unsuited to the current setup, which can be annoying. Acquiring the Gambit options most appropriate for certain situations can also take a bit of luck, since most are not sold in shops until late in the game. These gripes are relatively minor when the effectiveness of Gambits as a whole are considered, and the system is a superb method of putting character AI in the player’s hands at all times. 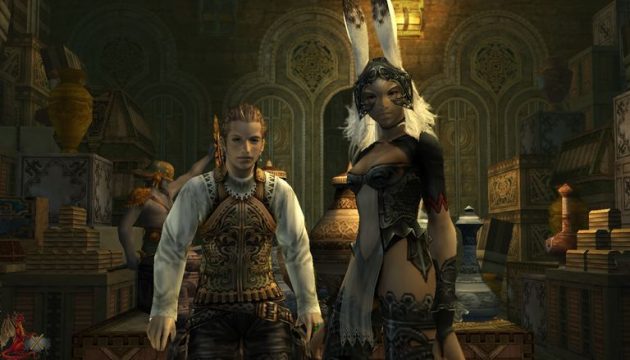 Meet the man whose deft touch lightens the mood without fail.

XII includes the standard level gaining approach of RPGs, but its License board makes all other aspects of character growth subject to player approval. The concept is rather similar to Final Fantasy X‘s Sphere grid, although much less linear. The License board is gradually unlocked by using the points dead enemies provide, and it governs what characters can equip along with the abilities they learn. Unless one is prepared to spend a very long time grinding this demands attention be paid while selecting the things each character learns, but the amount of customization it allows is a worthwhile tradeoff.

Careful consideration of the things each character can equip will be necessary in any event, because money in XII is not amply awarded. Enemies rarely drop money, and the things they do drop will not sell for enough cash to supply everything shops offer unless the player has been doing a tremendous amount of grinding. This is fortunately not a major problem, because victory is not solely contingent upon holding the latest and most powerful shop products in hand.

Should one choose to grind, that is also easily done due to the enormous expanse of Ivalice that can be explored. Just passing through the mandatory regions can be a sizable undertaking even while running from every enemy, but plenty of alternate paths and optional areas can be visited to enlarge the game world even further. Final Fantasy XII has such a massive world to explore that it’s a bit of a shame so many of the side quests are the time-consuming Hunts, which require finding the right person to contract a powerful foe to appear at a specific place, often only when the game’s weather allows. Laborious though they often are, Hunts do get more interesting when stronger creatures become available after beating up the early ones, and the game offers plenty of other options to generate interest in exploring its world. 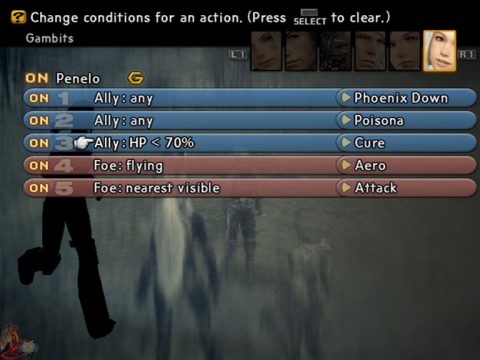 Would you rather tinker with these options once in awhile, or manually select the Attack button over and over? I know my pick.

One of the ways it generates interest is by looking superb. Five years of development meant Square Enix released the game near the end of the PS2’s life cycle, and Final Fantasy XII shows off what the system’s graphical capability is. Its camera provides an occasional reason for ire because of its alarming tendency to point straight down when close to corners, but the visuals themselves remain impressively detailed throughout.

The audio is also mostly a high point. The rogue’s gallery of composers responsible amounts to six names, but Hitoshi Sakimoto’s contributions occupy most of the game’s screen time, and they do an excellent job of canvasing the world of Ivalice with captivating melodies. The voice acting is by and large quite good too, using capable performers who do the material as much justice as possible.

The core story of Final Fantasy XII features plenty of strong adversaries, and the player will have to mix up Gambit tactics regularly. XII also features some dangerous traps lying concealed on the ground that can be very difficult to avoid stumbling onto. Save points fully restore the party, but long distances sometimes separate them. The result is a game that requires the player to pay attention, rather than letting the Gambits do all the work. Never in its central plot events does XII feel completely unfair or arbitrary in its difficulty — unless one stumbles upon a hidden boss that promptly eviscerates the party. Becoming powerful enough to defeat everything the game has to offer will easily take over one hundred hours, while just completing it can be done in half that time.

Final Fantasy XII could and almost certainly would have been even better had its director not been replaced in the middle of development. As it stands, the game is nevertheless captivating throughout its tale. Exploring its gigantic world is fascinating and absorbing, displaying the capabilities of the PS2 near its zenith. It does not do everything well to be sure, but enough of its aspects are high enough in quality that it becomes one of the most investing and rewarding PS2 RPGs I’ve yet experienced.