Several years ago, the development team responsible for Tactics Ogre lent their talent to Squaresoft, resulting in the creation of perhaps the most popular tactical RPG ever in North America, Final Fantasy Tactics. Now, roughly six years later, they have revived the concepts that made it so addictive to create Final Fantasy Tactics Advance.

The bulk of FFTA‘s gameplay is taken straight from its PlayStation predecessor. At the start of each battle, players select half a dozen characters, each equipped with a wide variety of abilities derived from the various jobs to be found in the Final Fantasy series. After a quick battle, new abilities can be learned, the world map can be explored, new equipment can be bought, and players can send units off on side quests to track down rare items.

One of the biggest changes between the two games comes in how those abilities are learned. In the original Final Fantasy Tactics, new abilities were learned by spending job points, which were awarded every time a character performed a successful action of any sort. Now however, all abilities are obtained by equipping various weapons and certain types of armor, much like in Final Fantasy IX. Most weapons usable by a given character have an ability contained within. Equipping these weapons allows those abilities to be used. Additionally, at the end of every battle, all participating characters are awarded a fixed number of ability points. Earning enough ability points with a given weapon equipped lets a character learn the ability it teaches permanently. This system means that it takes significantly longer to learn abilities than in the previous game, but it also fixes some balance issues by making it impossible to learn certain powerful abilities until very late in the game. 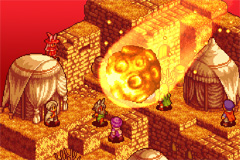 Two other major changes from the original Final Fantasy Tactics serve to add a good deal more variety to the game. While previously, nearly any character in the game could take on nearly any job, characters now belong to one of five races. Each of these races has its own list of jobs, most of which are exclusive to that race. Furthermore, there are a number of laws in place during each battle, banning the usage of certain abilities or weapons. In some cases, laws exist banning more abstract concepts, such as repeating the same action as the last character used. While easily circumvented or altered, these laws serve to add a good deal of variety to battles.

Not everything about FFTA can be considered an improvement however. The basic layout of menus is highly obtuse, making such basic features as checking the stat bonuses granted by a piece of equipment something of a chore. Difficulty meanwhile is best described as laughable. Towards the end of the game in particular, it is frequently possible to completely wipe out the opposition before a single enemy has a chance to attack. Difficulty can be lowered further still if players fail to take into account that enemy levels are based on those of all twenty plus characters one is likely to possess, so every character acquired at the beginning of the game and left to gather dust lowers the bar that much more. 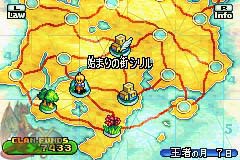 The story also leaves something to be desired. While the original Final Fantasy Tactics was set against the backdrop of a decidedly complex political struggle, in a setting resembling Europe around the time of the Spanish Inquisition, FFTA offers up a rather simplistic tale of several children being transported from the real world to a somewhat saccharine fantasy setting.

Aesthetically, Final Fantasy Tactics Advance is top notch. Most of the music and graphics seem to have been recycled from the earlier PlayStation title, with some fairly impressive animations used in place of the twirling cameras and misty particle effects Square was so fixated upon at the time of the original’s release. The translation is rather refreshing as well, at least compared to that of the first Final Fantasy Tactics, which was riddled with R/L transpositions and such statements as the famous “We opened the ore. Inside it was, there were big bags of gil in there!”

Overall, Final Fantasy Tactics Advance is a fairly solid game, well suited to the Game Boy Advance. While not the deepest game out there, there’s a certain satisfaction in mindlessly improving your characters, and with 300 missions, roughly 90% of which are optional, there’s a good deal of things to pass the time with.