The 3DS has played host to a number of offbeat smaller titles in recent years, and Excave is definitely a member of that group. A fast-paced action RPG centered around loot gathering, Excave might be worth a test from anyone prepared for a considerable amount of frustration along the way. Most of its mechanics could use some improvement though, and despite the game’s brevity I was ready for it to be over.

The structure of Excave is simple enough: an anonymous adventurer must descend into the depths of a dungeon, seeking treasure. There is a whiff of narrative at the beginning in the form of a magician who wandered into the labyrinth and hasn’t been seen since, but very little else is even hinted at until the end, which supplies an unsatisfactory conclusion to its meager tale. Despite its brevity, the opening text crawl manages to have a couple of typos slip in, further informing prospective players that story is not the reason to sample this title.

Navigation of the labyrinth’s environs is accomplished by marching into the place and going through doors. At the start only one door is open, but taking the path it provides to its conclusion provides a key that will open another area. This pattern continues throughout the game, usually spiced up with a room full of enemies or a boss that must be slain to get the required key. These dungeons aren’t randomly generated, but the layout is not complex enough to demand much thought by the player to proceed.

Combat follows a basic action setup of a single attack button that allows the player to use the currently equipped weapon, while the B button activates whatever is on the other equipment slot. Magic spells come in the form of tomes that occupy an inventory slot and have a single use, while expendable keys and a shield can also be held in this auxiliary spot. Arranging these things is a problem because it must all be done in real time with the touch screen, as Excave lacks any means of pausing the action, which makes trying to use a healing item when in the middle of a firestorm quite a struggle. 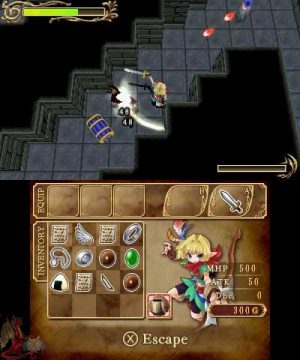 Letting that equipment sit as useless inventory is not a recipe for long-term survival.

Enemies can drop money or items in their death throes, which will quickly fill up the sixteen slots available to hold things. At least one of those slots should be devoted to an alternative weapon, because constant use will make armaments break. Fixing them requires exiting the dungeon and paying a fee, but at least the implement is not permanently lost.

Dealing with the undesired items back in town is more annoying than it should be, as selling items requires the player to manually move them onto the correct screen icon instead of simply unloading them at a store. Storing stuff for later use is also annoying, as it demands more time-consuming manual movement of items onto empty spaces. Plenty of temporary statistic-increasing items also use the vague phrase ‘a certain time’ to describe the period of their effect along with not having any indication of their augmentation amount, which is not helpful when trying to gauge their usefulness.

There is no leveling in the game, but equipment found later on is so much better than what was available in the early going that weak enemies no longer deal any damage at all. To make up for that, the new enemies found in each section of the labyrinth are quite capable of murdering an unprepared player, especially since there is no immunity time after taking a hit. Falling in battle makes a piece of current equipment be lost at the point of defeat, though it can be reclaimed if that spot can be reached again. Several rooms with hordes of enemies pouring out from generators are dangerous, and the camera is zoomed in a little too far to have much warning of whatever is lurking around the next corner. There is also little logic behind the challenge of each floor, with simple feats surrounded by onslaughts of foes at the next station. If one was able to rush straight through Excave it would probably take three hours at maximum, but the need to deal with nastier floors can double that time. 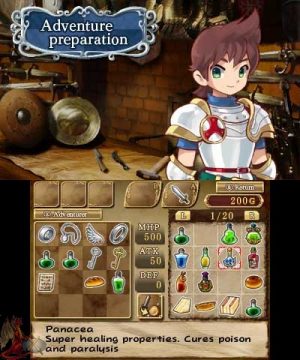 Get used to looking at this screen every time you leave the dungeon.

While not among the greatest examples of soundtrack scoring, Excave‘s music is pleasant to hear. It varies frequently when moving between dungeon floors, and its sound effects are often useful for determining when an enemy is close but not yet on the screen. The dungeon visuals do a pretty good job of making new areas distinct, and the variety of foes present is impressive, but several almost-identical palettes are used to represent different opponents.

In the two years since its Japanese release, Excave has already gotten a sequel. Whether that title crosses the Pacific is unknown, but the opportunities to improve on this first title are plentiful. I had fun for a little while with Excave, but frustration at its many unpleasant aspects was a constant feeling later on.