Atlus Maps a Route Forward for This Series

While Atlus as a developer is best known for the SMT games, over the last few years it has quietly pumped out a new series with no end in sight in Etrian Odyssey. A throwback to what until recently was a dead genre, the first Etrian Odyssey let older gamers take a nostalgic trip back to the first-person dungeon-crawlers of their youths, and younger gamers see the serpentine hells and class systems that laid the groundwork for today’s RPGs. The 2008 sequel improved the interface and provided a new dungeon without trying to push the series forward. In Etrian Odyssey III: The Drowned City Atlus gets creative and finds ways to expand and improve the gameplay while maintaining the old-school setup, resulting in the most interesting and best paced game in the series.

The biggest change in EO3 comes in the class system. While the foundation is the same — each class has a branching set of skills and one skill point is awarded per level — the classes themselves have been redesigned. What this means to those who have already played EO1 or EO2 is that the classes and skills in this game are new, forcing gamers familiar with the series to rethink and strategize how the party is constructed. The great thing here is that Atlus manages to provide many class options, each of them is independently separate with little to no skill overlap, and they are all useful and well balanced.

For example, all of the Buccaneer’s skills are support abilities or attacks that automatically trigger after other party members’ skills. Alone, she is weak and worthless, but with a smartly built party around her, hers is the only class capable of getting multiple attacks per round. The Prince has most of the party buff and debuff abilities, but rather than being a typical squishy bard, he is a frontline fighter who wears heavy armor. While only five guild members can be brought into the dungeon, there is a sixth slot available in the party in combat. This allows the Wildling class to call an animal to join the party temporarily, and Ninjas can create a doppelganger mid-battle to literally double their capabilities. Every class is strong and has something it’s great at. Even the Farmer, a utility class used for harvesting, gets combat-worthy abilities. It makes forming a cohesive band of fighters fun and exciting in a way that’s rarely pulled off this well.

As great as this sounds, the class system takes a turn for the awesomer a third of the way through the game when dual-classing becomes available. Guild members can add a second class and put skill points in its abilities. Their stat growth won’t be affected and they cannot put points in the added job’s one class-specific skill, so a character’s primary class remains the one affecting his combat abilities the most. This adds an endless level of customization and one can easily make powerful characters. A Gladiator/Ninja can have the Gladiator’s extra damage to enemies with a Ninja’s evasiveness and ability to create a doppelganger. Now in boss fights you can have two evasive, strong, frontline fighters in one party member. Subclasses also allow holes to be filled, so a second healer or defender can be “added” without removing one of the five members from the party. This also fixes a pacing problem from EO1 and EO2: if a third of a way through the game a player realizes his party needs to be overhauled, rather than creating new level one recruits, he can just subclass his main party to add the required skills. 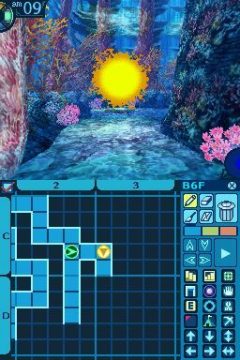 The labyrinth itself also benefits from a pacing upgrade. Now there are four floors per stratum with a warp back to town at the beginning of each stratum, and unlockable shortcuts in walls are more generously placed throughout each floor. It’s possible to make permanent progress with only ten or fifteen minutes of time, unlike the other two games in the series where it could be a major time sink just to open the next shortcut. A new autopilot feature is included in the mapmaking options. Now the player can draw a path on the bottom screen, hit the autopilot button, and the party will follow the arrows. Naturally, this can only be used in previously explored areas and it doesn’t affect the encounter rate, but it helps make retreading through the same areas — an inescapable part of dungeon crawlers — less dull. The layouts themselves start out straightforward in the first stratum, then quickly add tricks and gimmicks to vary the crawling so it stays interesting.

Other than these improvements, EO3‘s gameplay is identical to the others in the series. Playing the game consists of delving into a single, huge labyrinth while using the stylus to draw a map of the dungeon by hand. Enemy drops are sold to increase the shop’s inventory. Combat is an unsurprising turn-based “Fight, Skill, Item, Flee” deal. Highly customizable limit skills allow party members to team up in battle to use an underpowered ability, but the diverse array of limit abilities to choose between provides yet another way to cover holes in the party’s makeup. The encounter rate is always low in the first floor of a stratum, building up to a high rate with many enemies per battle on the bottom level of a stratum. FOEs are special enemies that are visually displayed in the maze as a large, glowing ball quickly associated with a steep challenge and game over screens. 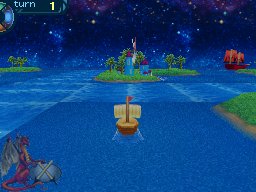 The sailing game is an odd addition.

EO3‘s story is light-handed but engrossing. The intriguing tale of two dueling factions trying to convince the player’s guild to be their lackeys packs enough deceit and twists to become a genuine reason to keep playing the game. Atlus USA’s localization handles the storytelling and NPC dialogue expertly, and the new class names are an improvement over Landsknecht, even if they seem to come straight from a season of Spike’s The Deadliest Warrior. Visually, the game is a disappointing step back from what Atlus did with Shin Megami Tensei: Strange Journey. The 3D dungeon isn’t ugly, but it’s bland, lacking the detailed movement and depth in Strange Journey, and even looks marginally worse than EO2. Unfortunately, the music isn’t any better. Only the postgame stratum’s background score is memorable and unique. The rest is forgettable and lazy. The useful sound effects are the only reason not to mute the game and listen to something else.

While there are a couple difficulty spikes at bosses and when dual-classing first becomes available, a well-constructed party should be able to handle the game without much trouble or level grinding due to the overall smooth pace, tight dungeon layouts, and excellent balance. If dungeon-crawling gets old, there is an optional sailing minigame to explore the area around the city in a ship. It plays out like a puzzle game with adventure elements, provides some rewards which can be used in the game proper, and isn’t very fun, but makes for a good, time-consuming diversion. Hardcore gamers looking for a real challenge will be happy to know the postgame stratum provides evil floor layouts and difficult enemies. There are several optional endgame bosses to find which even a max level party will struggle with. Party members can be retired to generate a souped-up, low-level recruit. Many enemies, including all bosses and most FOEs, have conditional drops if they are defeated with a specific ability. Given the many ailments and attack types in the game, figuring out all the conditional drops is an optional time sink, but they yield the best equipment in the game. A New Game+ option is available and is the only way to get the game’s best ending.

Considering the game sets out to recreate a classic experience, it’s hard to find any real faults in Etrian Odyssey III aside from the graphics and music. There are a couple places where the instructions to progress the story are unclear, and the standard battle system and first-person crawling don’t try to break new ground. Other than that, the interface is perfect with a clean, fast menu system and a fun way to use the stylus. The story is interesting even without mountains of text, and the best in an Etrian Odyssey game by far. The creative, reinvented classes and ability to dual-class are the highlights of this new entry in the series. The slightly smaller labyrinth and lower level cap combined with the improved pacing make this a less intimidating game for those frightened away from EO1 and EO2, although the hardcorest of the hardcore might be upset that it is not fifty hours longer nor is it brutally difficult outside of optional endgame content.