Atlus released a DS title in 2007 that was a throwback to the first person, turn-based dungeon crawlers of the distant PC past. While the Wizardry series is dead in America, its spin-offs in Japan still do fairly well, and this latest take on the genre was quickly brought stateside. Atlus stayed old-school with Etrian Odyssey, keeping the gameplay simple and clean, the character classes individualized, the story minimal, and the difficulty brutal. Artistically, the 2D art and music were appealing while the 3D graphics in the maze were rather bland. The game’s trick was the ability to map by hand the enormous labyrinth, a feat somehow more fun with a stylus on a DS screen than with a pencil on a sheet of graph paper. A year later, Atlus brings the Americas its sequel, Etrian Odyssey II: Heroes of Lagaard, promising a new maze, new classes, and several interface tweaks along with gameplay that is nearly identical to the original. The result is a solid game almost too reminiscent of the first in the series; what was fresh last year feels recycled today. Everything great about the original is still intact and enjoyable in the sequel, but its small changes craft it into something longer and harder while failing to make it noticeably better or worse.

Etrian Odyssey II plays similarly to some of the first RPGs to migrate from the freedom of a pad and pencil to the limited and slow clock cycles of an early 1980s-era personal computer. The player creates a party of his choosing out of an array of possible character classes, names them, and then delves into a large, twisting labyrinth sans automap. The viewpoint is first person, and the maze is explored tile by tile with the party only able to move in four directions. An on-screen radar of sorts pulsates in a color spectrum building from peaceful navy blue to alarmist crimson, indicating the likelihood that the next step forward will initiate a random enemy encounter.

The unvarnished battle system has few frills and a quick pace. The party’s commands are all entered at once, after which the friendly and enemy units execute their moves in an order mostly dictated by agility, although entropy and the specific skill used can change up the order from turn to turn. Combat flows like the smooth Dragon Quest VIII, deriving its entertainment more from the battle’s singular challenge, the attrition of many battles in succession, and the variety of enemies than flashy effects and complicated abilities. The impatient gamer can bump a shoulder button to cut off all attack animations and cause the party members to do a normal attack each turn, though this is a fast way to a game over when used recklessly.

The abilities available to each party member vary depending upon how the player chooses to allocate skill points. Every class has a set selection of skills it can learn. All classes can learn passive stat boosting skills, and some skills are available to more than one class, but most abilities are unique for that job type. While the best techniques are unlocked by spending points in other ones first, the skill tree is not particularly deep, and the requirements are displayed when the player highlights the technique in question. Characters are not as specialized as they were in Etrian Odyssey; for example, the offensive gunner class can learn a shooting skill which alleviates the party of all status ailments, and enough classes can heal that a medic is no longer mandatory. Shared abilities between classes are often the most utilitarian in nature: party healing, temporary stat increases, and attacks that inflict status ailments. This allows the player more freedom to use whichever classes he desires, although the realism of the former game’s class set-up suffers for it. Slowly doled out as a party member levels up, points take some planning to take advantage of optimally. For a small drop in level, a character can reallocate all of his points, thereby encouraging the player to experiment with the various skills to discover which ones mesh with the current party and which are underwhelming. 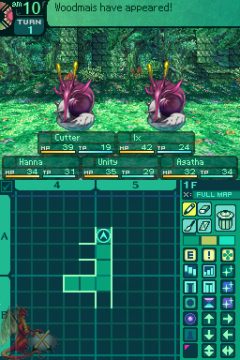 Aside from an open skill tree, Etrian Odyssey II puts a unique stamp on the old subgenre in the way it handles mapping the labyrinth. The top screen houses the first person perspective and turn-based battles, but at all times the bottom screen displays a map of the maze. The map is drawn by hand with the stylus. In a simple, logical twist, it takes the interesting, but cumbersome, traditional method of mapmaking in labyrinth games, namely, a pencil and a pad of graph paper, and drops the cumbersome whilst keeping the interesting. Like everything else about the game, the interface for drawing maps is clean, fast, and intuitive. There are many customization options for marking important spots on the floor, such as painting floor tiles different colors and an assortment of symbols for pits, story events, and so on. This is an area where the sequel makes a noticeable, though not earth-shattering, improvement over the original.

Not content to settle for mere random encounters and a player-created map, the developers add one final gameplay twist in form of dreadful, formidable FOEs. FOEs are nonrandom fiends who patrol or guard parts of the maze. Often, a single floor will have several FOEs on it. They appear on the map and usually tread a defined path, although some will chase the player to his grave if they catch sight of the party. These demi-bosses are usually much more difficult than a level’s standard enemies, and facing one when it is first discovered is an excellent way to remind oneself of what the game over screen looks like. Because they are visible on both the map and the first person viewpoint, dodging them can be easy. They take a step each time the party takes a step in the maze, and during combat they move a step for every turn of battle, more than happy to join the monsters currently engaged with the player to transform a standard encounter into a nightmare. Oddly, defeating a FOE yields no experience points, leaving the sad potential for an epic battle with one to result in no gain whatsoever. When one drops an item, however, it is certain to sell for a pretty penny and probably unlock a powerful piece of equipment in the shop.

The shop’s offerings are also handled in a manner unlike a traditional JRPG. New items become available depending upon what the player finds in the dungeon and sells to the owner. On the fun side, this produces rewards for finding rare or unique materials. On the not-so-fun side, it means that a strong item or weapon might never be purchasable if the player misses some items or does not find enough of others. Many important materials can only be gained via gathering resources at specific hotspots in the labyrinth, but harvesting them requires skill points to be spent on collection abilities — skill points better spent on beefing up the party’s ability not to get annihilated in combat. 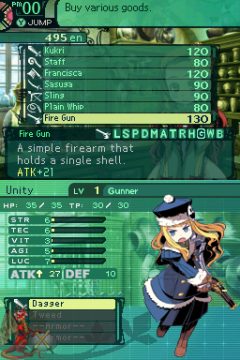 There is a slight breakdown in gameplay when all of these components come together with the game’s hard difficulty. Traversing the dungeon takes a party capable of surviving the attrition of battle after battle. Every second or third floor, a warp can be activated so that one needs not run through the same levels repeatedly, but the enemy encounter rate is high and the crooked, winding pathways take time to follow. Contrastingly, FOEs and bosses are so singularly challenging and deal so much damage that every party member must be capable of receiving a heavy smack of pain without immediately crumpling to the ground. Surviving the game’s least merciful enemies will require a party that can withstand doom-smack after doom-smack while pitifully whittling away at a behemoth’s HP. Finally, the largest source of money and most consistent way to unlock essential shop items is by gathering materials at resource locations. These three necessities — exploring the labyrinth, battling bosses and FOEs, and collecting items — all require considerably different party configurations. Even after testing the disparate classes and deciding on five, or six, or seven characters with which to play the game, in all likelihood there will be parts of the maze which are impassible with the seemingly indomitable combination of skills and classes one has chosen. While strategy, in both class growth and party selection, is extremely important for success, level grinding is a monumentally time consuming aspect of the game because of this. It would be fair to estimate that over half the time it takes to play this game will be spent level grinding or item harvesting rather than exploring and progressing through the dungeon, which is a shame.

The production values for Etrian Odyssey II are acceptably average. The 3D view of the maze on the top screen is clearly prettier and more intricate than it was in Etrian Odyssey, but dirty DS 3D is still dirty DS 3D. The muddy attempts at texturing the graphics are neither impressive nor an eyesore. The background score is sometimes excellent, sometimes forgettable, and thankfully never bad. Battle beeps, boops, and slashes are all standard and unassuming. In yet another deviation from the norm, there is no overarching story to speak of in this game. Characters are developed via the innumerable side quests. This allows the focus to be on entertaining, well-written character interactions rather than wasting time on a snooze fest, JRPG plot about saving the world. The party is asked to explore the labyrinth mainly because it is there, and exploring is delightful. The lack of a force-fed, linear story encourages the player to invent his own; interactions leave the party’s lines open so that the player can imagine whatever roles and motives he wishes for his avatars.

Anyone searching for a lengthy, challenging RPG should give Etrian Odyssey II serious consideration. Do not be frightened away by the first person dungeon crawler aspect of the gameplay. At its core, EO2 is about random, turn-based encounters, and crafting a unique party out of an open-ended plethora of options. Everything else, including the mapmaking, FOEs, and throwback dungeon perspective, only add to the enjoyment of the game. The many places where Atlus trail blazes a new path in game design bring a fresh and fun slant to the experience. Modern JRPGs themselves stick to an old and recycled formula; Atlus changes things up by adding in components of an older, nearly extinct, and much less recycled type of RPG, and they combine brilliantly. For those who have played the first Etrian Odyssey, the sequel’s gameplay tweaks are hardly worth contrasting. The labyrinth is new and lengthier, the difficulty is higher, and the classes were rebalanced. Other than that, it’s the same previously innovative gameplay revisited.