In its early months the PlayStation 2 was not the dominant home for RPGs, and the few that trickled out were an underwhelming bunch. Ephemeral Fantasia is at least unique among titles for any platform, though its quality is otherwise what might be expected from launch RPGs for any system. Konami came up with a distinct idea that might be remade one day in a good way, but as it currently stands Ephemeral Fantasia is a mess that requires a great amount of patience for scanty rewards.

Wandering musician Mouse and his sentient guitar Pattimo have been summoned to the island of Pandule, where the noble Xelpherpolis wants him to compose and perform a fitting tune for his upcoming nuptials to the nation’s princess Loreille. Mouse’s investigation of the island quickly uncovers strange and dismaying things under the festive surface, and Xelpherpolis quickly reveals that he is responsible for orchestrating the problems. An attempt to stop things with force at the wedding results in Mouse’s utter defeat, but instead of dying he is transported back to the day on which he arrived upon Pandule. Condemned to repeat the same five day cycle that culminates in Xelpherpolis’s wedding, Mouse and Pattimo must use their ability to retain their memories in a struggle to stop the time loop.

Ephemeral Fantasia‘s scenario is similar to Groundhog Day in video game form, but having to go through the same events repeatedly is much less compelling here. The pertinent moments of the cycle can be reached with a quick edit in a movie, while here the player has to sit around killing time until the necessary spot arrives. Only one place on all of Pandule lets the player skip time forward, and only by a maximum of six hours. One minute in real time equates to about one hour in the game, so often the most expeditious course is to just stand around waiting until the clock hits the right note. While a unique occurrence in an RPG, it’s hard to praise this mechanic.

Absent the horrid pacing, Ephemeral Fantasia‘s narrative manages glimmers of interest. Accepting that Mouse and Loreille instantly fall for each other is extremely difficult, and most of the characters who join have astonishingly little to say about their predicament until select scenes are triggered. The eventual explanation for the time loop and Mouse’s resistance to its effects is intriguing, and some of the moments near the finale are interesting. Getting there requires a sizable investment of time and patience though, not helped by Konami’s localization work. If read as a translation in the spirit of bad kung fu movie dubs the text becomes somewhat entertaining, but otherwise the poor proofreading and word choice evident will repel. 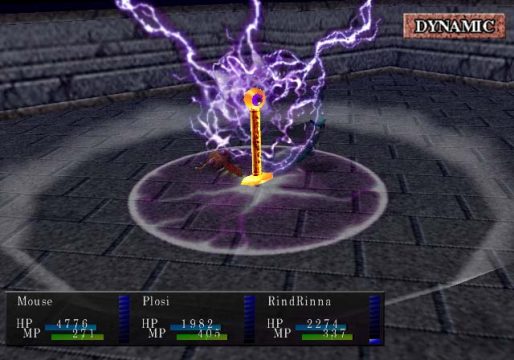 Apparently Dynamic means the camera aimlessly pans around, because that’s what it does.

Making the plot progress is done by recruiting allies, and figuring out how to do this demands either an extraordinary level of patience or the willingness to live by a FAQ. Knowing that one prospective ally is going to attempt to kill Loreille through an explosive in her drink is not enough to recruit her — that task requires fighting the sentient deadly ingredient twice, including once while it is actually in the glass. Another ally can only be recruited by having a replacement pen ready when he breaks it, a task that demands having two other allies to reach areas initially out of reach and waiting for a golden bird to appear, which must then be beaten to provide the needed material. Without looking at a FAQ this can only be done through many cycles of wandering around Pandule and listening to the vague advice provided, not a task for the faint of heart.

Combat takes the form of randomly encountered foes in a variant of ATB, with a few interesting elements. First is that no character has a straightforward attack option — instead a variety of arts are available in addition to the standard magic, item, and defense options. Battles never take place on an even keel; one side has always surrounded the other and thus gets first strike. The strength of the enemies encountered varies wildly within locations, though more powerful enemies only start to show up as levels increase. There is also no stopping the ATB gauge except by pausing the game, which can make many encounters quite chaotic.

Combat’s frequency might not be such a concern if the player’s team being surrounded happened less often, but enduring enemy attacks before anyone can strike back makes the battles take much longer, especially since the animations for multiple blows to the same participant cannot be aired simultaneously. A system of learning new arts through repeated use of those already known is badly executed due to the game not making clear what is required, making another FAQ consultation a wise idea. Some of the enemies and opponents late in the game are a sizable increase in difficulty over anything else, something that is best overcome through copious grinding to survive — and is then followed by a boss encounter that poses no challenge whatsoever. Ephemeral Fantasia at least makes the ATB of multiple Final Fantasy titles look well-executed by comparison.

Aside from improving the weapons of characters, the inventory system of Ephemeral Fantasia demands little attention. Any item found while exploring the game that is not critical or saved in a Time Vault eventually made available will be lost each time the island’s continuum loops, but replenishing the inventory isn’t difficult. The baffling decision made by the developers was to have the clock, which guides every action taken on Pandule, vanish every time the inventory is exited. There is no reason not to display the time at every moment, and doing so is actually required when the same button must be pressed again to call up the menu, so the need to constantly bring it back is inexplicable. Time can be saved through a move that instantly transports the party to a different location on Pandule, but this maneuver is inconvenient due to its planting the player in one of several spots within a square on the map instead of a guaranteed landing zone. One thing the game is kind enough to allow is saving almost anywhere, which puts it ahead of many other console titles. 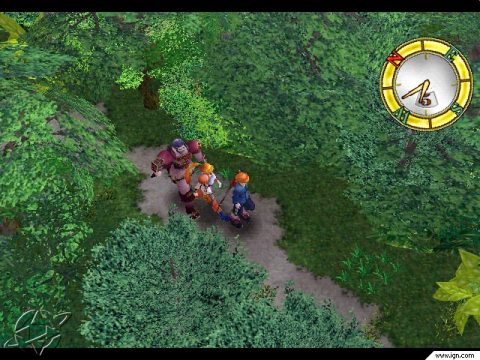 That clock is with you the whole game, watching and judging.

Ephemeral Fantasia was reputedly in development for the Dreamcast before work shifted to the PS2, and its visuals are certainly more appropriate for Sega’s final console. While a pretty good variety of enemies is present, and the island is distinctive in each component part, none of the things depicted manages to be more than workmanlike in appearance. Numerous plot points are rendered less impressive due to the ineffectual facial models, and load times are also a frequent occurrence despite the underwhelming nature of the visuals.

Mouse is a musician, and fittingly the soundtrack for the game is a varied and good quality selection of tracks. Most of the compositions are no less than pleasant, and the variety of battle themes is welcome. Several tunes take center stage in a rhythm minigame that is fortunately not required much in the game, due to its badly explained rules and the difficulty of doing it well without sinking a lot of time into repetitive practice. The variety of the soundtrack does its part to keep monotony from sinking in though, especially when the game takes somewhere over sixty hours to complete.

Ephemeral Fantasia is a hard game to excuse, for its interesting concepts are undone by poor execution. I don’t hate the game, and will likely remember certain aspects for a long time to come, but very few of them will stick with me because they were high quality. The odds of a remake tidying up this glorious mess are very long indeed, and the original is a tough sell to anyone based on genuine merit, meaning that Konami’s effort to broaden its RPG lineup was a failure.