Why Even Have Regular Soldiers?

Godseekers follows Zhao Yun and his friend Lei Bin. The two stumble across a girl frozen within a crystal while driving away bandits. The girl emerges revealing herself as Lixia, and possesses great powers gained by five elemental orbs. Lixia decides to follow the two while Zhao Yun searches for a master to serve, getting caught up in the many battles between the various factions in China. The story of Lixia’s identity and her quest to collect the orbs doesn’t really drive proceedings, focusing more on how Zhao Yun ends up travelling from battle to battle as an excessive amount of betrayal goes on between the factions (fans of the series will not be surprised who does the most betraying). Even the story of the three kingdoms is glossed over quickly, with players usually just told that they are now allied with this person without providing any real context to it. The game does just about enough to hint at how things will come to a head at the end and provides a satisfying finale, but other than that it’s immediately forgettable.

Missions require players, or someone they are escorting, to reach a certain area or defeat specific opponents, while keeping themselves or their VIPs alive. Between one and five generals are deployed from the player’s side, with perhaps a few allied generals, and they will face off against a selection of opposing generals or unit commanders as well as an assortment of general troops. On their side’s turn each combatant gets to move and then attack or defend, with a free use of one of up to three equipped items also available. When attacking, players use a selection of attacks which have different areas of effect, e.g. a thrust two squares in front or a slash across the adjacent row of three, with each attack using up a certain amount of energy. This lets players line up multiple attacks, either against the same enemy or different enemies. Players can expect the usual Dynasty Warriors “surprises” in terms of enemy reinforcements suddenly appearing, temporarily halting focus on the original mission objective for a couple of turns. 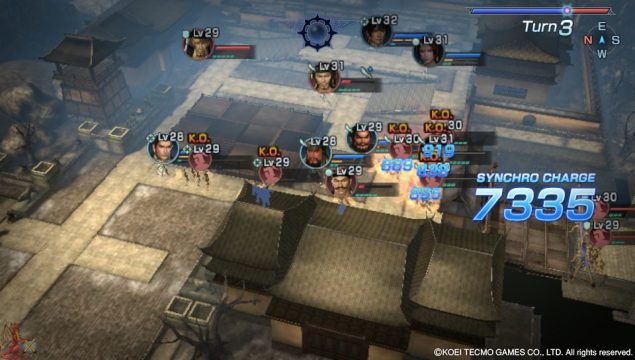 Anyone who thinks being outnumbered is a problem hasn’t played a Dynasty Warriors game.

Like their hack-and-slash counterparts, these standard troops serve primarily as cannon-fodder to satisfyingly sweep through while building up the game’s two special bars. The first is the individual characters’ Musou Gauges, which allows access to more powerful attacks. The second is the Synchro Gauge, which lets one character sync up with their allies provided they are in the correct positioning, letting those that have already gone have another turn and culminating in a massive joint attack. Activating the Synchro command is the surest path to success; it will swiftly knock out any nearby foes.

Though the combat is enjoyable, it is unlikely to have the depth that hardcore tactical fans may be looking for. Three difficulty options are provided before starting every mission, but as long as the player doesn’t come with severely under-level characters for the mission, success is never hard to come by. There is some depth provided by enemy types, as well as weapon upgrade and skill tree systems, but it’s very easy to end up overpowered without focusing much attention to any of these. However, for those looking for a lighter tactical RPG that will allow them to mow down lots of enemies without worrying about implementing perfect strategy, Dynasty Warriors: Godseekers is overall a fun experience.

In addition to the main campaign, players can undertake a very large selection of extra battles. There is also the Path of Destiny, a series of short conversations for each general with other generals that are unlocked by progressing through the campaign and accomplishing goals for that general such as reaching a specific level or participating in a certain number of battles. These extra conversations add a nice footnote to the story, but aren’t worth dedicating time to outside of those unlocked naturally while going through the roughly twenty-hour campaign. 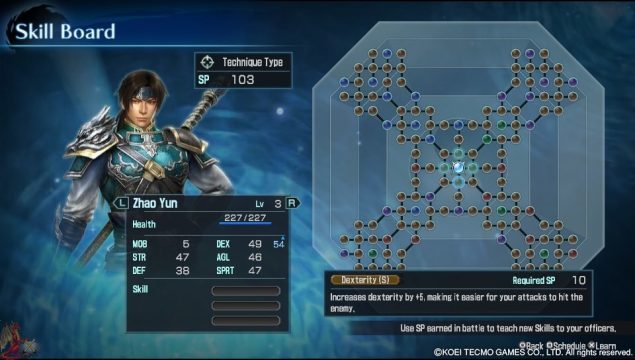 One thing Omega Force has earned a deserved reputation for is the technical quality of the graphics, and Godseekers is no exception. The game has a very impressive level of detail on the Vita. Players can choose between two representations of attacks, either sticking to the traditional angled tactical RPG view, and diving into a Dynasty Warriors close-up of the character knocking down hordes of enemy fighters. It’s a nice touch and though some things are a touch stiff the special attack animations utilising the series’ curious selection of weaponry looks great. The game also features numerous animated cutscenes that further add to the visual experience, even if the Vita is clearly at its limit rendering them. Dynasty Warriors: Godseekers is fully-voiced in Japanese, which gives everything a decent audio backing, and in the context there’s no sense of loss in the lack of English voices. The soundtrack similarly provides a decent background without either standing out or grating to any noticeable extent.

Dynasty Warriors: Godseekers is a lot friendlier to players than many tactical RPGs, though some would argue too much so, and it’s impressive how well it manages to evoke its parent series’ formula of powerful warriors sweeping through opposing forces. The campaign doesn’t take too long to get through and is balanced both in difficulty and experience awarding so that players won’t have to spend ages getting their roster up to speed. Hardcore tactical fans will likely want more challenge than the game seems to provide, but for those looking for a lighter tactical experience, Dynasty Warriors: Godseekers fits the bill nicely.