Once More Into the Breach

Chromatic Games may have changed its name from Trendy Entertainment following its re-acquisition by original founder Augi Lye, but is sticking with the familiar Dungeon Defenders moniker for its newest title. Dungeons Defenders: Awakened effectively acts as a soft reboot for the series, as the developer aims to recapture the appeal it obtains from the original Dungeon Defenders with an exciting mixture of tower defense strategy and loot-based RPG action. Though the initial release may not come with the amount of content series fans are used to, understandably given how much time those previous titles have had to built on their launch versions, it nonetheless effectively showcases why the hybrid genre has gotten such a dedicated following over the years.

Dungeon Defenders: Awakened is almost entirely about the gameplay, with the story simply serving as an excuse to get into it. Four heroes — the Squire, the Huntress, the Apprentice, and the Monk — find themselves cast into a rift that sends them back in time to when they were considerably less powerful. The heroes continue their role of defending the Eternia Crystals from invading forces while trying to find their way through the rifts to defeat the final boss. Once in a while players will get brief scenes reminding players of this fact or setting up a location change, but ultimately it’s all rather irrelevant and there’s not much of a sense resolution by the end of the current campaign. 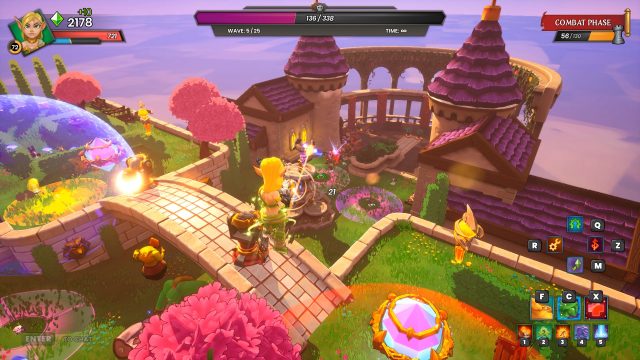 There’s decent variation between the stages.

Fortunately, the actual gameplay is very strong. Chromatic Games has used its experience to refine the tower defence action RPG template. Players choose one of the four heroes, each who can build their own automated defences to attack advancing enemies and has their own attack style. As players level up by defeating enemies, they become more powerful, gaining access to more upgrade options.

Enemies appear from preset locations in each stage, and follow predetermined routes that are made known to players ahead of time. Before each wave, players have the opportunity to build and upgrade their defences to stop those enemies getting to and destroying the Core Crystals, with a loss coming if only one of them falls as players will respawn after a short time if they are defeated. Players are restricted in what they can build by both the monetary costs, with more gained from gems dropped by enemies and a bonus at the end of each wave, as well as a hard point cap, with more powerful defences adding more to the point cost.

The difficulty feels fairly balanced; while character power certainly helps and is necessary to attain a basic enough level to defeat enemies, making smart use of the layouts and potential choke points is vital and make the difference between success and failure, particularly when the most powerful foes show up. It can sometimes be too late to retrieve a stage if mistakes are made in placements during the earlier waves, and it often won’t be apparent until one of the later waves when that is the case. However, this success and failure rate is par for the course and there’s a rewarding feeling to having a change in tactics meet with a change in fortunes. Co-op is definitely the most enjoyable way to play the game and what it has primarily been built around, but the single-player is still strong and a satisfying experience on its own. 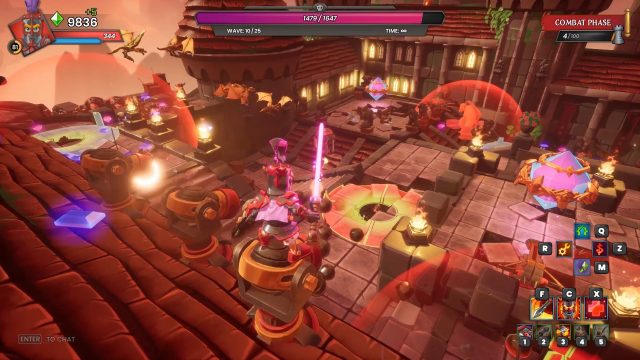 Players can provide some crucial interventions once the enemies start appearing, but won’t be able to completely overcome any major flaws in the chaos.

Loot drops in abundant amounts, though much of it won’t be an upgrade to what is currently held. The primary benefit of excess loot comes from selling it for gold, which can be used to upgrade the pieces of loot that are useful. The upgrade system is fairly straightforward, though it is strangely hidden within the menus rather than being an obvious point of focus. The controls in the review version also seemed much more geared towards keyboard and mouse players. The gamepad controls were perfectly functional, but there were numerous times where it felt awkward to access certain elements on the UI, though one expects some ironing out on this front before the console versions launch. Between stages, players can return to the tavern, though there currently isn’t much there to do apart from manage inventory and test one’s current DPS before heading to the next stage. There is at least highly enjoyable replayability to the game, as players take on new challenge modes or higher difficulties.

There isn’t anything hugely exciting about the locations and graphics, but the colourful visuals add a nice style to proceedings and keep the focus on the gameplay. It can be a bit hard to follow the specific action where heavy waves start appearing, which is where co-op makes things much easier to manage and for players to react to. The audio is serviceable, but completely forgettable and not an important part of the experience, and the brief event scenes are greatly hindered by a lack of subtitles, though players aren’t missing much from them anyway.

Ultimately, the success of Dungeon Defenders: Awakened can’t be fully determined at this point in time, and there’s a feeling that the console releases may be where the game gets an opportunity to shine, away from the ready comparisons to its predecessors. It’s certainly highly enjoyable and there’s an excellent base for it to build upon, but it remains to be seen how well it manages to build upon its current content and keep players coming back for more.