Finally, a Reason to Keep Europe Around

They just don’t make ’em like they used to, or so it would seem. On the surface, Drakensang: The Dark Eye seems to be an ode to simpler times, when the western PC RPG reigned supreme and all you needed was a five man party, a pause button and a Girdle of Sex Change to have a magical evening. German developer Radon Labs has attempted to recreate the magic of the Black Isle games and succeeded on many accounts. Sadly, certain elements of the game feel geared towards a very specific audience, while others simply feel alien and uninspired. That said, there is still a lot to love and the $29.99 price tag certainly makes for an appealing entry into the now desolate land of PC RPGs.

The first aspect of Drakensang that becomes immediately apparent is the incredible depth. Based on The Dark Eye tabletop system, nearly every aspect of your characters can be modified to your liking. As soon as you begin the game, you are presented with an extremely full-featured character creation system. After choosing an archetype, essentially the character’s class, you choose what combat, social, and crafting skills and abilities you want to concentrate on. While there are certainly builds that seem to excel above others throughout the game, it’s apparent that Radon Labs attempted to make each and every skill a valuable asset to the player. Party members that join along the course of the adventure can be trained in much the same way, allowing the player to have a full repertoire to choose from at any given time. 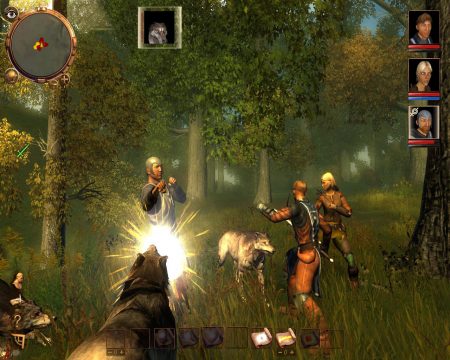 Magic users excel at casting powerful spells and punching wolves in the face.

However, you cannot change the appearance of any of the archetypes, although equipped weapons and armor will be reflected on your character. While this may seem like an oversight, it’s clear that certain limitations had to be implemented to allow for a lower hardware requirements. The game does indeed look gorgeous even on lower end systems, and a high quality texture pack is available on install to allow for some scalability. However, invisible walls and mostly decorative environments diminish the sense of immersion and highlight the limits of the engine.

Not all is dull and dreary in the world of Aventuria though. Severely clichéd quests and a storyline straight out of the RPG handbook are fleshed out by clever writing that manages to put a new coat of paint on the old stereotypes, and there are plenty of stories to go around. With an immense amount of side-quests and a tremendous storyline, Drakensang clocks in well past the forty hour mark, provided you are ready to deal with some recycled material, particularly in the last half of the game. Sadly, although there is certainly enough bulk to keep the player busy for hours on end, there is rarely any moment that breaks from the MMO-style fetch and/or kill X quests.

Combat takes place in real time, with the ability to pause at any time to give any party members orders to move, attack and use specific skills and abilities. While at first glance the combat seems to be a matter of ordering every unit to attack one enemy until it dies and repeat until loot is acquired, the AI does seem to scale as you take on higher level encounters. Enemies will use smarter tactics as the game progresses, which forces even experienced players to use that pause button more often. While this brings the speed of especially difficult battles to a snail’s pace, it reminds one that this is very much a classic RPG. 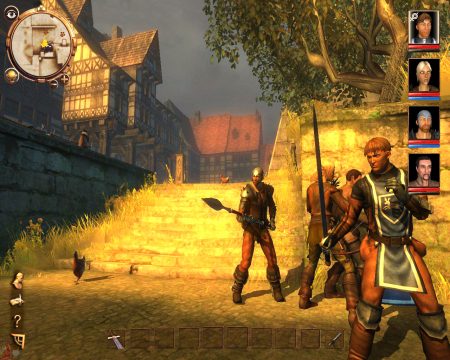 Seconds before the Poultrygeist.

Drakensang succeeds in creating an interesting environment. The art style, while simple, is polished and attractive. The musical score is quite fitting, and while you probably won’t be humming the world theme to Aventuria while you’re away from your PC, it is quite fitting and remarkably well crafted given Radon Labs’ relatively small budget. English voice acting is surprisingly well done considering its German roots, although a majority of the dialogue in the game is portrayed as text.

Drakensang is ultimately a rich and polished experience, and fans of the old party-based PC RPG design will find the same virtues and flaws that come with this type of game. With an English demo readily available, there is really no reason for anyone interested in an old-school RPG to not give it a try. It makes no attempt to be casual or even readily accessible to the mainstream, however, and would-be players should approach it expecting to feel overwhelmed the moment they start the game. For those able to overcome its flaws, Drakensang: The Dark Eye will deliver a long and fulfilling experience at a very reasonable price.