The Adventures of Bishonen and Megathighs

Editor’s Note: This game was played on both the PlayStation 3 and the PlayStation Vita, by Sam Wachter and Adriaan den Ouden. The game does not feature cross-play or cross-buy, but save files can be transferred from one system to the other via the PlayStation Network.

Sam: On the surface, Dragon’s Crown looks like a stereotypical brawler: button-mashy and quarter sucking. It’s not hard to judge a game based on its initial looks, but to be surprised by one’s initial expectations? That is truly a feat in itself. This is a brawler like no other, one that is surprisingly rich in detail and design. Vanillaware’s Dragon’s Crown managed to surprise both Adriaan and myself in such a profound and genuine way that we may owe it a small apology for our preliminary response.

Adriaan: In many ways, Dragon’s Crown feels like a game from yesteryear, harkening back to old beat ’em up classics like Gauntlet or Final Fight. However, Dragon’s Crown takes that classic, arcade-style formula and manipulates it into a modern-day action RPG, creating a game that’s just as addictive and enjoyable, but with far greater replay value. Players get the traditional three lives in each dungeon, but can purchase continues with their hard-earned gold, the cost increasing with each one. then choose to risk their loot by entering another dungeon immediately with the remaining lives they have, receiving bonuses with each consecutive one, or return to town and accept their spoils. With six character classes, nine stages divided into two separate paths each, a total of nineteen unique boss fights, and three difficulty levels with their own level caps, there’s a ton of value here.

Sam: What’s even better outside of all the benefits that Adriaan has mentioned is that all six classes have their own unique play styles and skills that they can harness. There is essentially a character type for every kind of player, and Vanillaware does a great job of catering through the various skills that can be learned by each class, as well as what common skills can be shared. While the combat looks as though it is a stereotypical brawler, Dragon’s Crown does a great job of ensuring uniqueness amongst its classes, making battles an insane, crazy romp. There’s nothing more satisfying than a dwarf tossing an enemy four times its size or an Amazon showing Herculean strength that doles out extensive amounts of damage. Furthermore, skill points can be allotted any way the player wishes, meaning the classes do not play the same way for each player. The combat itself is fast-paced and surprisingly strategic, and a wide variety of enemy types and environments with different strengths and weaknesses keep players on their toes.

Adriaan: Dragon’s Crown also sets itself apart by providing a surprisingly interactive environment. Even in the heat of battle, there’s a lot of detail that can be overlooked unless a close eye is kept on the surroundings. There are loot-carrying chests all over the place along with hidden gems and jewels in the walls that can be collected for additional points. Players can use the pointer (controlled with the right analog stick on PS3 or by tapping the screen on Vita) to interact with the environment and get their thieving ally Rannie to unlock doors and chests, revealing hidden rooms and treasure. The game has dozens of side quests that can be completed for additional skill points, and almost all of these involve finding something hidden in a stage.

Sam: There are also tons of runes hidden within the stages that can help players either in combat or to solve a puzzle. Highlighting runes with the pointer and creating combinations is a great way to add variety in the stages. Some combinations help by defeating enemies, such as destroying all undead enemies in one shot, while others help in solving puzzles such as finding hidden doors, treasures, or foes. The only drawback to the rune system is memorizing combinations, although there are no penalties for making mistakes. More often than not, even without memorization, players can create a variety of combinations to help in each of the stages, even if it wasn’t the exact three runes needed in the first place. 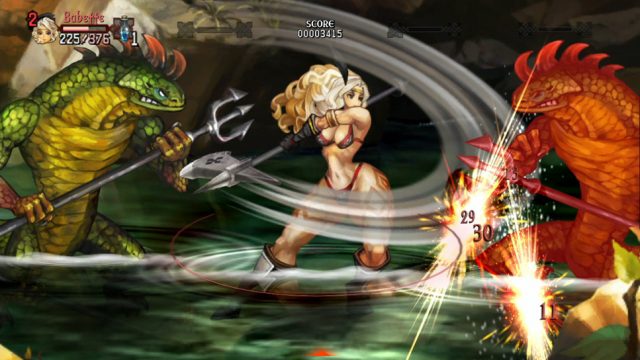 The mighty strength of the Glamazon! Behold her mighty thighs of steel!

Adriaan: At the end of every stage, the game assigns players a rank from E to S, based on their overall score, time, and other factors. Once the stage is over, every player is given a random piece of equipment with the given rank, along with additional random equipment found in the treasure chests throughout the stage. Unwanted equipment can be sold off for gold, which is useful for a variety of things in town, or it can be equipped to buff up the character. All unused gear is stored in the armory, which is shared between all characters attached to that particular save file. Players can create several characters all associated with the same save file and share gold and equipment between them. Throughout the various stages, players will also discover the bones of fallen adventurers, many of which belong to other players of the game. These bones can be resurrected at the temple, creating an ally that can accompany the player into battle. This means that even when playing alone, players can still have three AI-controlled allies with them. Allies are also shared between characters.

Sam: Even with shared allies, the best way to experience Dragon’s Crown is by playing it with a friend. With a friend, players can solve puzzles and complete main and side quests together, and also receive the same benefits as their partner. There’s nothing more fun than playing with someone through the stages and having different reactions to events, bosses, and environments. One exception to this is the final boss, for which players will only receive credit if they host the game themselves. This is quite frustrating, as the final boss is very difficult and poor Adriaan had to defeat it three times before getting credit for the win. It’s important to note that online co-op play can only be initiated after all the bosses in the “A” path of all nine stages have been defeated, and it requires players to be in the Gate or Stables at the same time in order to hop into another player’s game. Dropping in and out of a player’s games works surprisingly well, as playing with many of the Japanese players is a great experience. Also, if a player is disconnected from the game, their character remains in the active party and the AI seamlessly takes control. Adriaan and I had some touchy moments with initiating the online at times, but once we were able to participate in each other’s game, the online was surprisingly smooth within the stages on both the PS3 and Vita.

Adriaan: Unfortunately, even though Dragon’s Crown is shockingly deep and incredibly fun to play, it suffers in one area that brawlers have suffered in for ages: its story is bland, generic, and almost nonexistent. Players take control of a new recruit in the adventurer’s guild of Hydeland, taking on quests for the townspeople. One of these quests involves the royal family. The King has gone missing and is believed dead, and there is an internal power struggle going on for the right to succeed him, which the player unfortunately becomes embroiled in. All of this is covering up a conspiracy by an evil group of mages who want to awaken a mythical dragon for ambiguous reasons. The plot is lacking in detail, and it’s generally easy to ignore. 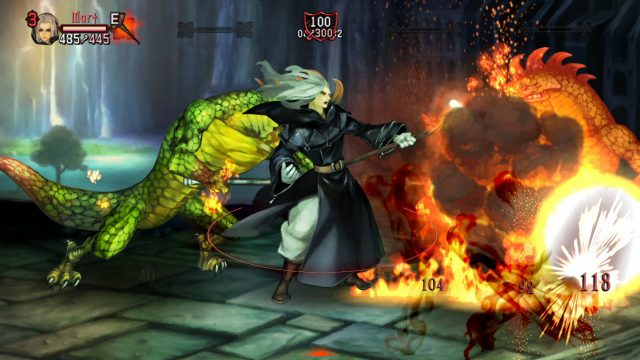 Feel the flames of the Wizard! Burn! Burn! BURN!

Sam: While Dragon’s Crown‘s story is as hopeless as a generic D&D campaign, it’s not all bad considering it uses a very unique narration style. There is a single narrator accompanying the story, and his voice gives the players indications on how to progress in the game while also sprinkling the odd colourful commentary. While the game attempts to tell a serious tale, the game is not as straight-faced as it would have you believe considering some of the callbacks it makes to Dungeons & Dragons, Monty Python, and much more. These instances in the game are silly, fun, and it does negate some of the genericness of the story by adding some very cheeky commentary related to popular culture.

Adriaan: Although the audio generally doesn’t stand out, it has its moments. The voice of the narrator has a delightful British accent and perfect inflection that makes him a fantastic storyteller, while the music is enjoyable enough, though it tends to get overpowered by the sounds of battle. Players can choose between English and Japanese voice actors for their chosen character, and there is even an option in the menu to change the voice of the narrator. Unfortunately, voices other than the default don’t become available until after you beat the game’s normal difficulty.

Sam: Vanillaware is always praised for its visuals, and Dragon’s Crown looks as smooth as it plays. There are so many intricacies within the environments, and the attention to detail within the world is quite impeccable. The character designs do have their flaws, but it’s all in how much breast appeal offends you. There’s a lot to the visual design, from the Amazon straddling a Behemoth to the Sorceress’s “special” run animation; it seems more silly than offensive. The cut scenes, however, while gorgeous in design and colour, do have some touchy instances such as a female monk giving a massive crotch shot, to lots of naked ladies draped in gratuitous poses. Still, even with those small titillating instances, the game’s attention to detail (even when possibly offensive) is truly impressive.

Adriaan: Despite some troubling images, the majority of the game’s visual design is unique and marvelous. The hyper-stylized character designs are powerful and original, even for a Vanillaware game, making it one of the most visually fascinating games on the PS3 or the Vita. Occasionally, the amount of detail can actually get in the way. In some situations, there is so much happening on the screen at once that it can be difficult to keep track of one’s character.

Sam: The negatives in Dragon’s Crown are few. It’s so easy to fall in love with the game’s depth and detail that it’d be wrong to judge this title at face value. Clocking in at under twenty hours for the main quest, it’s a game with tons of replay value and exploration, and repeating stages doesn’t feel like a chore. There’s no other brawler out there that revives the genre the way this game does. Dragon’s Crown is completely worth your attention, and if you have friends to play it with, it’ll be worth the crazy ride.