Dragon Quest Slime Morimori came out back when Square Enix was still a fairly new thing, but the game owes very little to the Square side of the company. It doesn’t play much like Dragon Quest either, save in a few mechanics imported from the main series. Slime Morimori is easier to recommend to those seeking an overhead platformer instead of any kind of RPG, and is pretty entertaining on that level. It just doesn’t feel much like the series from which it came.

Slime Morimori appropriately has a player-named Slime for a protagonist, one whose task is to rescue all 100 inhabitants of its home village from a gang of kidnappers. The plot isn’t complicated, which is helpful for those who do not speak Japanese. Figuring out what to do next is usually quite simple, and a helpful FAQ exists for the few moments when something a little more involved is demanded. The presentation is quite entertaining thanks to the immense variety of Slimes depicted, but the things they say are less interesting than the increasingly ridiculous appearances they sport.

The Slime’s unique appendage-less shape means its actions follow a course different from any other protagonist. Ambulating by scooting along the ground is simple enough, but attacking the enemy is accomplished by the Slime stretching itself and then contracting, causing its body to slam into an adversary. This deals damage and also causes whatever the Slime struck to fly into the air, a location from which it can fall onto the Slime’s head and be carried around. Tossing enemies and inanimate objects around supplies another handy method of attack, while simply toting things from place to place is necessary to solve many of the simple puzzles. The areas constantly spring new material out and stay fresh through the relatively brief game, ensuring that getting bored will not become a problem. 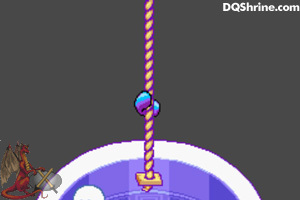 Based on this method of travel, slimes have no bones.

Someone on the development team made a bothersome boo-boo when it came to the controls, stemming from the limited number of buttons the GBA had to exploit. The A button is pressed into service constantly for both stretching and jumping. This leaves the B button largely ignored save a couple of special events, most of the time being useful only back in town to chat with fellow slimes. The shoulder buttons are employed, but only to swap the order of things stacked on the hero. Having the jump and stretch function be on the same button can be unfortunate, since the stretch is triggered by also pressing in a direction with the D-pad and doing it in the wrong place usually results in falling off a platform. The overall difficulty is low enough to make the occasional misstep due to control confusion nonfatal, but giving the B button a function outside of town would have been a much better idea.

Slime Morimori is structured as one gigantic rescue mission, though a rather easy one. The abducted slimes are found in treasure chests throughout the areas, and they need to be picked up and sent home. This is fortunately much more convenient than running back to town for every one of them, as various conveyances are present that will infallibly deliver anything tossed onto them back to the village. Being struck by a hazard will naturally cause anything the heroic Slime is carrying to fall down, but reacquiring mislaid characters is easily done. The only real bother is a time limit that slowly ticks down while exploring each area, which the heroic Slime must counter by going home to sleep or losing half its available cash just like a defeat by death.

Two key Dragon Quest mechanics remain in Slime Morimori: losing half the current cash upon defeat and only being able to save at a church. The former helps keep the difficulty to a low level and ensures a player mistake is not fatal. The latter is simply annoying, as the game lacks any sort of quick save feature to accommodate the player needing to turn the GBA off suddenly. Later handheld Dragon Quest titles would include such a thing, but even in 2003 the usefulness of that feature makes its absence galling. 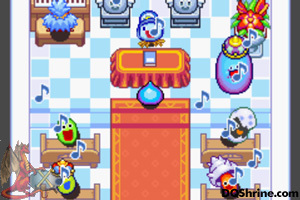 Who knew slimes could carry a tune so well?

Slime Morimori is a bright and colorful depiction of multiple slimes in frequently amusing fashion — how else can a ninja slime be depicted? Enemy animation is also quite detailed, displaying impressive sprite work. The music uses a few familiar Dragon Quest compositions and sound effects to cement its place in the series and becomes rather interesting in later areas, though early parts of the game rely overmuch on a single theme.

Of all the things a Dragon Quest game would reference, I definitely would not have predicted the final battle of Yoshi’s Island. There are a few items to buy and a town which can have player-subsidized improvements, but anyone seeking it out expecting an actual RPG will be sorely disappointed. It’s a cute and breezy platformer that would have far more fans if it had seen release outside Japan, though playing it in Japanese is no major task. The game is easy enough to recommend on that basis, though its control and saving issues keep the game from being an unqualified success.