This Dragon is Mobile

Replaying older games can be an eye opening experience. Sometimes you wonder what the big deal was, and other times you find a great game you missed out on because it just didn’t appeal to you at the time. With the mobile releases of Dragon Quest, Square Enix has given another demographic the opportunity to experience these classic games. While some are better suited to this format than others, the original trilogy seems to pull it off fairly well, even Dragon Quest II.

While Dragon Quest II has already seen many remakes over the years on many different systems, this version feels right at home on iOS. The game’s menus and controls are pretty limited, so using a touch screen device for 2D interactions and movement works well enough. Players can swipe anywhere on the screen to bring up the directional pad, and a single screen press acts as the confirmation button. It could even be controlled easily with one hand on the iPhone or iPod Touch, though the menus and visuals are more at home with the iPad. 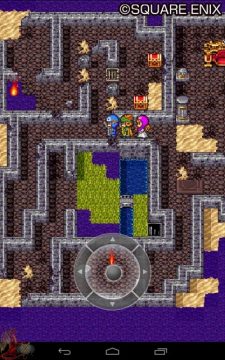 Who designs these castles?

Combat is a simple affair of choosing between standard attacks, magic, and item usage for the three characters in the party. The unnamed hero is a pure melee fighter, Prince Kain uses a little magic to supplement his weaponry, while Princess Elaine is the best magic user. All party members are obtained pretty early on, so while their impact to the game’s already sparse narrative is minimal, battles are at least balanced thanks to having a full party.

Dragon Quest II offers little more than a few scraps of dialog to push the game forward. The three leads are all descendants of the original game’s hero and have been called on to stop the latest evil encroaching upon the land. The structure is linear early on, but opens up later in the quest. At that point there is much less direction, so some might find it a little disorienting.

Progression is often gated by doors locked with specific keys or special items that must be obtained, but players are rarely without somewhere new to explore. Sometimes there will be items that are tougher to find naturally, but for the most part the game flows well. This version requires very little grinding to survive until the more challenging areas near the end. 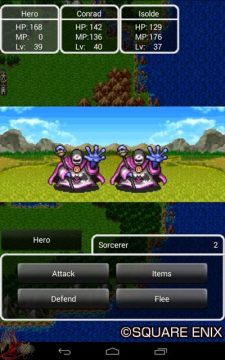 Talk to the hand is ineffective!

For anyone who has ever played a traditional Dragon Quest game, the formula is pretty much the same. Like the first game in the series, the story is minimal, but the gameplay is solid and well-balanced. Coins are best kept in the bank until needed so that players don’t lose half when dying and returning to town. Fast travel helps keep transit manageable, and new towns have progressively better equipment to buy.

This re-release is simple, but it works. The gameplay is straightforward and that makes for an easy transition to iOS. This version offers nothing new that will make it stand out, but instead simply offers a new platform on which to experience Dragon Quest II. The port is solid, the core game is old school and offers little depth, and when combined, it will likely only appeal to series fans wishing to replay an older title or those looking to fill in gaps in their play history. I can’t say Dragon Quest II blew me away, but I’m glad I got a chance to play it as it was a good time filler on mobile.