Back during its initial release on the NES, Dragon Warrior II immediately became my favourite game. It made many improvements over its predecessor: a party of three heroes, multiple enemies on-screen, a larger world, more dungeons, and even a ship for travel. Taken for granted in modern Dragon Quest releases, many features introduced in the second game were groundbreaking at the time. Since then, the game has been remade and ported to the Game Boy Color, iOS, and Android systems. With the recent release on the Nintendo Switch, which is based off the iOS and Android versions, Dragon Quest II retains its original charm, even if many of the game mechanics have aged.

Taking place 100 years after the first Dragon Quest, it’s up to the bearer of Erdrick’s bloodline to seek out his two cousins and stop Hargon after his assault on Moonbrooke Castle. Though the plot in modern terms falls short, with no character development, compelling motives, or surprising plot twists, it’s an interesting time capsule that shows how the basic good versus evil plot grew into today’s story-rich RPGs.

Although the story may not have depth, the world has a bit of the fairy tale charm that is prevalent in the other Dragon Quest games. Each town has its own unique personality where players will encounter the tragic plight, rampant strife, bits of humour, and trickles of happiness of the townsfolk. For instance, one drunken man hides at the edge of town, fearfully avoiding his wife’s wrath at his ineptitude. There’s a fishing village full of women whose husbands never returned home from a fateful fishing voyage; then there’s the perverted old man of the village who gleefully enjoys the gender ratio and ogles the women. Some of these tidbits add to the personality of each town, making the locations more memorable for their people rather than mere places for players to get a key item or advance the plot. 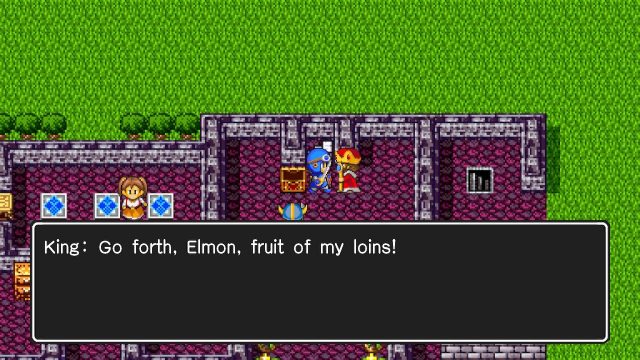 The hero’s father has an embarrassing way with words.

The script has a different flavour when compared to modern Dragon Quest games, retaining the Elizabethan English style from the original Dragon Warrior II localisation. However, the translation stays true to the original Japanese version, which also uses older Japanese terms, and it includes the salacious humour and whimsical nature that was missing from the original. Some of the names of items, spells, and locations were also updated for consistency to match the ones seen in other recent Dragon Quest releases.

The gameplay, whilst simple, is very balanced. Combat strategy involves attacking, casting magic, or using items. Though the game employs more strategy than its predecessor, the difficulty depends mostly on the party’s level and equipment. The high rate of enemy encounters can slowly cripple a well-prepared party, and an ambush can easily wipe them out; even so, the biggest problem players may face is the lack of direction in Dragon Quest II. After the party acquires the ship, the world expands for exploration at the player’s leisure, but the game only offers obscure hints on how to proceed. Several key items require players to use trial-and-error tactics, such as combing every village and dungeon rather than receiving useful information on where to go next. These frustrations are further magnified by the incessant encounter rate, which pads a relatively short adventure with hours upon hours of combat.

Fortunately, Square Enix added a few improvements to boost the gameplay. The battles move along at a faster pace, and players gain more experience, which decreases the grinding time from the original version. The addition of a vault from later Dragon Quest games helps alleviate the monetary penalty of losing half of all gold upon dying. Items, once hidden in the 8-bit version, now flash as a small glimmer of light, so players no longer need to use a ‘search’ command over every single square tile across a map for a key item. There’s also a quick-save feature for those on the go, and the Zoom spell now allows travel to all towns and castles, instead of the last save point like in the original. These modifications not only make the game easier and more accessible, but they address the frustrating problems of the original release. 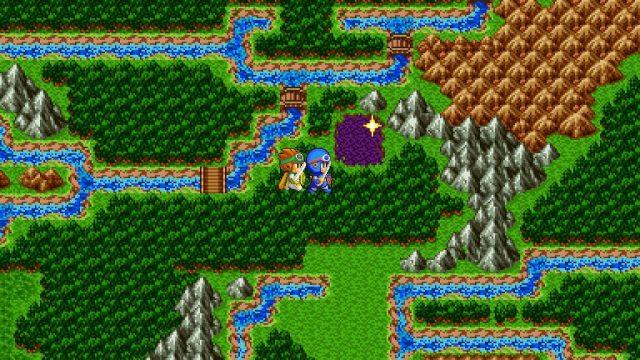 Once-hidden items are now visible on the map as a flashing point of light.

The graphics in this version also received a more refined palette, though they appear based off the smartphone version. The characters look more detailed and now match the cover art with the original Japanese box art. The landscapes appear charming and colourful, bearing the polish of the 16-bit era sprites. The monsters and characters have a smoothed-out, rather than pixelated, look to them. This change isn’t necessarily a bad thing, but it does give the game a different feel compared to the traditional Dragon Quest entries.

The music, composed by Koichi Sugiyama, is greatly enhanced from the chiptune sound of the 8-bit original. Each piece is replaced with a symphonic version, and the soundtrack ranks among the best in the series. Players who played the first Dragon Quest game will easily identify returning tracks such as ‘Overture’ and Alefgard’s ‘Overworld Theme’, whilst also recognising the addition of ‘Tantegal Castle’ and the first game’s ‘Cave Theme’ to the Switch version. 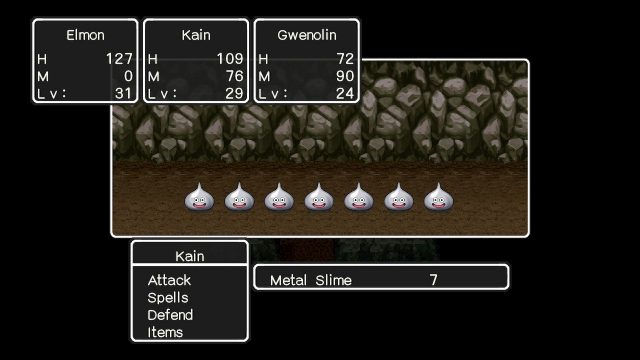 Many traditional enemies from the original make their return.

One major issue with Dragon Quest II is the endgame content. The final cave that leads to the last boss is perhaps one of the worst dungeons of the series, and navigating its corridors requires a specific pattern solved by purely blind experimentation. Coupled with the high random encounter rate, the final dungeon crawl slows to a slug’s pace and only serves to prolong the adventure with irritation instead of challenge or fun. Yet, in this case, greater punishment yields a greater reward in the ending. Similar to the first game, defeating the last boss allows players to freely roam the world, including each and every town. Though this option does not offer much in terms of content, players can witness small story resolutions in a few locations that are easily skippable. This is a nice feature not found in many RPGs, allowing players to savour the epilogue to their desire.

Upon revisiting the world of Dragon Quest II after a long hiatus, I still found it enjoyable, yet it no longer feels like the epic tale it was long ago. A world that felt so large in its day now feels both short and sweet and somehow also prolonged with unnecessary backtracking and excessive enemy encounters. Nonetheless, the Nintendo Switch version of Dragon Quest II is a fine-tuned port of an old game, with better graphics, music, and solid gameplay. Fans of the series and retro-enthusiasts may find enjoyment with this title, but newcomers to the series may find some of the story and gameplay elements archaic and outdated.