One Is the Loneliest Number

I wish I could have played Dragon Marked for Death when it first released on the Switch as a digital release back in January of this year. Not because it necessarily sounds like a must-play concept, though the experiment to balance a mission-based, side-scrolling action RPG specifically around the ideas of online multiplayer and complimentary character classes does sound like a bit of a gas. Rather, it would have been nice to see the game in its short-lived prime, back when there was life to be found on the matchmaking servers and it was possible to find others to party with. Now, however, with its physical release, the game’s servers feel like barren wastelands, and those who venture in will be doomed to play it as it was never intended: alone.

The game gives players four classes to choose from, which were bundled two apiece in separate versions for its digital release. Whether playing as Empress, Warrior, Shinobi, or Witch, the player takes on the role of one of the last survivors of the Dragonblood Clan, which has been wiped out by the realm’s Divine Family. Sent on a path of revenge by the Astral Dragon Atruum, it is up to the player to earn the right to a royal audience to carry out swift justice. As it turns out, the only way to be invited to an audience is to head to the local tavern and carry out menial tasks and missions from various otherwise unimportant townsfolk, again and again, gaining levels and collecting gear in a cycle of repetitive boredom.

There’s nothing wrong with a bit of grindy busywork, but Dragon Marked for Death takes this notion to its extreme. Barring the final two missions, the entire game is a slog through overlong hack-and-slash levels and superficial character growth consisting primarily of swapping pieces of gear and allocating the occasional stat point, with story beats completely divorced from the actual narrative. Those looking for an engaging narrative should run-not-walk elsewhere, as the only joy to be found here lies in tinkering with different character builds to take back into the same well-worn levels. Even this is rather dull without a dedicated group of friends along for the ride, which requires multiple copies of the game being played on multiple Switch consoles due to the baffling omission of local couch co-op. Considering the game is balanced around the four character classes supporting each other, this is a grievous misstep that all but ensured a swift demise for the game’s online component. 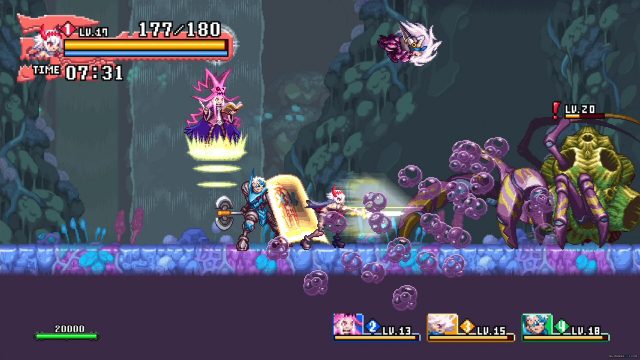 Looks like fun. Too bad it’s a case of “party sold separately”.

Missions follow the same hack-and-slash and random loot drop gameplay formulas, always enticing players to hope for that one elusive new artifact or stronger weapon. While gameplay doesn’t deviate much from moment to moment, at least the narrative setup behind missions is at least marginally fresh. Whether saving a village harangued by bloodthirsty ogres, retrieving a long-lost relic of an ancient civilization from a buried tomb, or defeating Cthulhu himself to retrieve a sacred statue from his innards, each quest sounds like it could have something interesting to add to the overall narrative, even if none of these ideas are ever more than skin-deep. It isn’t long, however, before the lengthy stages begin to get reused, with only slight tweaks such as a new starting point or barriers that seal off or open up specific sections of the map.

Dragon Marked for Death expects its players to play the same missions over and over again, allowing for the mission to be reselected at higher and higher difficulties once it’s been completed the first time. In fact, replaying missions is just about mandatory, as some difficulty spikes — particularly an end-game one leading to the final boss — require level grinding, and new missions simply stop appearing after a certain point. In order just to access the game’s final couple of missions, certain prerequisite objectives in specific missions have to have been met, though there’s no indication what the objectives are or in which levels they must be completed. The level of each mission’s difficulty can be raised far beyond what is necessary to finish the game, making it clear that this gameplay loop is the true purpose of the game for those interested in the constant grind. A nice touch, at least, is the fact that boss behaviors and movesets evolve at higher difficulties, offering some proof that the developers put at least that much thought into their designs. 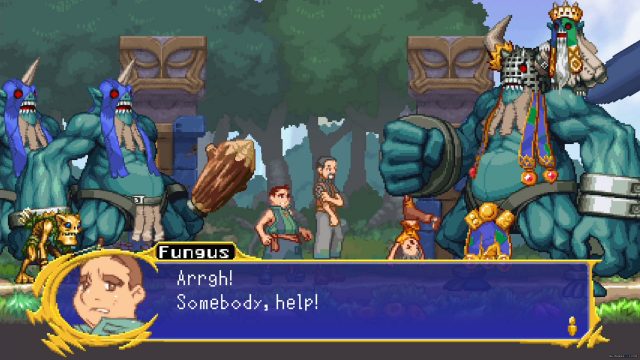 Detailed and colorful environments and pixel-art character designs really pop off the screen.

A good showing is made in terms of graphics and musical quality, even if having the missions on a constant loop like this means players will see the same level designs again and again. Dragon Marked for Death features high-quality spritework and impressive pixel-art character designs and environments. Bosses can be large in scale, and level art is just all-around vibrant and colorful. Music, too, is easy on the ears, though the unending combat shouts can be a real cause for annoyance. Apart from those, and a few basic utterances of townsfolk, voice acting is otherwise absent from the title.

The right person can find some level of enjoyment with Dragon Marked for Death. Unfortunately, the right person is likely somebody who has supplied a group of their own friends with copies of the game to join in on-line co-op, or else just has a hankering for stat-tuning and mission grinding. To the average gamer, the game’s repetitive nature in the face of its overall lack of multiplayer alternatives will spell anathema. Online games aren’t designed to put their best face forward when played solo, and it sadly seems this game’s timer is already ticking dangerously close towards its expiration date.