Divinity II: The Dragon Knight Saga is the follow-up to the most redundantly titled game in history, Divine Divinity, which was released for PCs back in 2002. Also redundant is the fact that Divinity II was already released on the Xbox 360 and PC, sans expansion, a little over a year ago by another publisher. Then again, Atlus, the company responsible for publishing this latest version, is no stranger to rereleasing games, as their three versions of Persona 3 would attest. Luckily, The Dragon Knight Saga contains not only the original game, Ego Draconis, but the expansion Flames of Vengeance as well. And with an easy eighty hours of gameplay for a mere forty dollars, it’s a heck of a deal too.

Having less to do with the divine and more to do with dragons, The Dragon Knight Saga follows the tale of a newly-initiated Dragon Slayer, trained from childhood to have an irrational and vicious hatred of all things draconic. In a twist of fate, the Slayer encounters the Dragon Knight — a human who’s been imbued with the blood of a dragon — his fellows have been sent to slay, fatally wounded and running for her life. As her final act, she gives her power to the Slayer, turning him into the very thing he despises most and putting him at odds with his former allies. Guiding him as a voice in his head, the pair set out to stop the true threat to the world: a villain named Damian who’s quietly amassing an army of demons, cultists, and undead.

Although the story contains far more sidequests than plot-driving moments, the writing is terrific and the voice acting superb, delivered in thick British accents with just enough dramatic flair to keep things light-hearted yet believable. The game has an almost Oblivion-esque level of exploration, with large, open areas to explore littered with quests and dungeons to discover. Even so, Divinity II is still focused and constrained enough that the plot never falls to the wayside for too long, keeping things moving and simultaneously providing new areas to explore. The Dragon Knight can even press X during conversations to read the minds of NPCs throughout the world, revealing valuable information that can be used to complete quests, find hidden treasure, or simply add more flavor to the tale. It’s like a perfect amalgamation of what BioWare and Bethesda each do best, and exploring the land of Rivellon is by far the most appealing and attractive aspect of the game. The Dragon Knight Saga in particular holds a lot over the original release of the game thanks to the inclusion of the Flames of Vengeance expansion, which in reality is just the conclusion to the story that, in Ego Draconis, doesn’t so much end as it does slap the player in the face and make the entire plot seem meaningless. 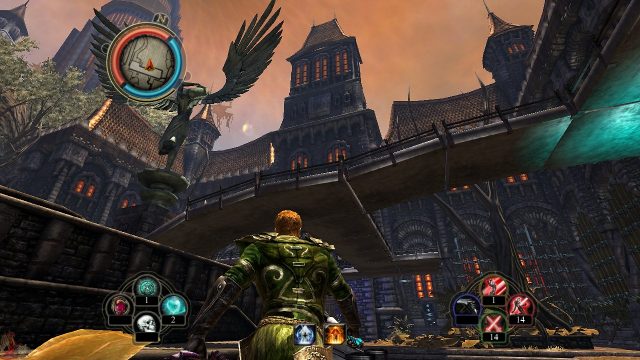 Aleroth, not to be confused with Azeroth.

The Dragon Knight Saga still has its share of problems though, and most come in the form of bizarre pacing and balance issues. Many key mechanics don’t become available until well over halfway through the game, and some of them disappear entirely during the expansion. The game’s difficulty is also all over the place, despite adjustable settings. Most of these balance issues can be attributed to many skills players can train in being significantly underpowered, a general tendency of major encounters to simply overwhelm through sheer numbers and burst damage, and the truly bizarre design of the player’s dragon form.

Combat in Divinity II is very action-oriented, and players can pick and choose from dozens of different active and passive skills in four different “class” trees to customize their fighting style, whether it be melee-oriented, bow-oriented, magic-oriented, or summon-oriented. There’s also a tree of Dragon Slayer skills that provide supplementary, general bonuses such as the ability to pick locks, carry more loot, or read minds, as well as weapon specializations. Up to eight skills, actions, and items can be bound to the four face buttons and directional pad on the Xbox 360 controller, which is surprisingly limited for a game of its type. Most players will likely find themselves limiting their skill choices to three action skills plus normal attacks so as to fit the face buttons, saving the directional pad for healing potions and abilities.

Unfortunately, choosing which skills to train in can be a rather difficult and frustrating matter. While the interface is clean and the descriptions of each ability are excellent, it’s not easy to discern just how useful each ability actually is. The Curse skill, for example, professes to reduce the damage dealt by all enemies in a fairly large radius, a potent defensive skill to be sure. What it fails to mention, however, is that it usually fails to affect bosses and leaders, the most powerful opponents that you’d most likely want to weaken. Other skills have similar weaknesses, and it’s quite easy to create a build that makes the game extremely difficult to play. A way does exist to redistribute your skill points, but it’s prohibitively expensive and players can’t expect to reasonably do it more than two or three times in any give playthrough.

Divinity II‘s dragon form, a much-hyped feature of the game, is also plagued with problems. The effects of a character’s level don’t play into the abilities of the dragon form, instead only being modified by the limited amount of dragon equipment that can be found. The end result is that the dragon form, which is supposed to feel significantly more powerful than the Dragon Knight’s human form, is actually a lot weaker and more vulnerable. To top it off, the dragon form doesn’t even become available until the final third of the game, and disappears entirely for the Flames of Vengeance expansion, reappearing at the very end for an extremely frustrating escort mission. Despite being heavily promoted, the dragon form is actually one of Divinity‘s weakest links. 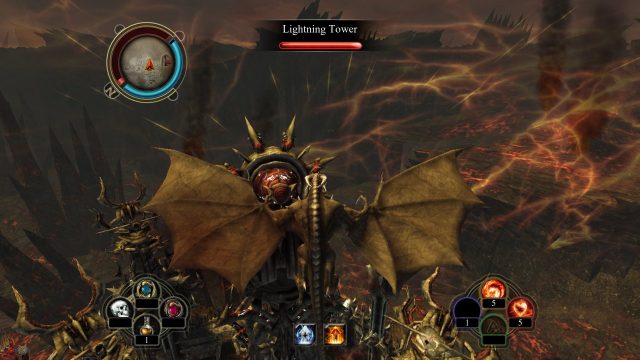 Behold your health bar: this will happen a lot in dragon form.

Dragon form isn’t the only thing that shows up frustratingly late. The Battle Tower, the Dragon Knight’s base of operations, only appears at the same time, and up until that point, many of the game’s core features are either unavailable or require a great deal of travel to access. In particular, the game’s crafting systems, which are quite well designed and extremely useful, can only be accessed from specialized crafters who are spread out across the starting area. Once the Battle Tower becomes available they can be accessed by using the Dragon Stone item without any travel time or lost ground, but until then it’s irritatingly out-of-the-way. Up until that point players will also have to lug around all their crafting items themselves, as the battle chest, which acts as the game’s storage system, is also in absentia. This is particularly frustrating, as inventory space is limited and it fills up quickly simply because of all the crafting materials that can be found.

The balance issues rear their ugly head in the Flames of Vengeance expansion as well, and more compounded than ever. In this instance, the game is unfathomably easy. By the time Ego Draconis wraps up, characters will likely be extremely powerful, and this only compounds in the expansion as new skill points are handed out at a ridiculous pace. Then, as the game reaches its finale, the dragon form appears again after a lengthy absence, and is even more underpowered than ever. Despite that, the adjustable difficulty slider prevents the game from getting too frustrating, and the excellent writing manages to hold it together.

Although the visuals aren’t particularly amazing, they’re decent enough. The games environments are expansive and quite attractive to look at, and the character models, though not impressive up close, look great from a distance. The many different sets of armor and weapons that can be found look terrific and all have a gleam to them that makes the hero look suitably epic, regardless of apparel. Unfortunately, the game also sports excessively long load times, particularly when returning to large, open field areas. The game’s score is also surprisingly catchy, and a soundtrack CD is included with The Dragon Knight Saga for all the music aficionados out there.

Ultimately, The Dragon Knight Saga is a game at odds with itself. Its solid writing and quest design has to contend with balance issues and a myriad of other minor problems such as a sporadic autosave function that feels more like an afterthought. Despite that, it’s still surprisingly fun to play, and as the game can easily provide eighty hours of content, it offers a lot of value for your dollar. Forty dollars is a steal for an Xbox 360 game, so if you’re looking for a WRPG fantasy to tide you over in the lull between Dragon Age 2 and The Elder Scrolls V: Skyrim, Divinity II: The Dragon Knight Saga is a good choice.