Back when polygons were still a new-fangled concept for artists, games combined 2D sprites with 3D landscapes for the simple reason that sprites are easy to detail. Disgaea: Hour of Darkness returns us to those bygone days with a vigorous shake and a cry that 2D is not, in fact, dead just yet.

As a general rule, any RPG with a poorly executed battle system will suffer horribly for it. Nowhere is this more evident than in tactical and strategy RPGs, whose sole purpose is often the functionality of combat. And although Disgaea doesn’t lend its entire tour de force to battles alone, the overwhelming majority of the game will be spent in the trenches of a 3D isometric battlefield smashing your foes into goo. Thankfully, you’re given more than an adequate number of weapons, skills, and classes to accomplish your perpetual smashing in a fun and tireless fashion. Combined with the precision of your control over the sequence of events, the elements set by the Geo Symbols, and the characters’ penchant for cooperating with one another, the number of possibilities starts to become more obvious.

One of the benefits of having characters of similar alignments, classes, and skill levels is that they have a higher chance of operating in tandem. For example, if you have two Brawler class characters of the same level, standing side-by-side, odds are that they will combine their physical attacks to, in effect, double the punishment for free. Fortunately for your enemies, most of the spell-like skills don’t operate in this fashion, although they tend to be more than powerful enough to inflict greater damage on their own. 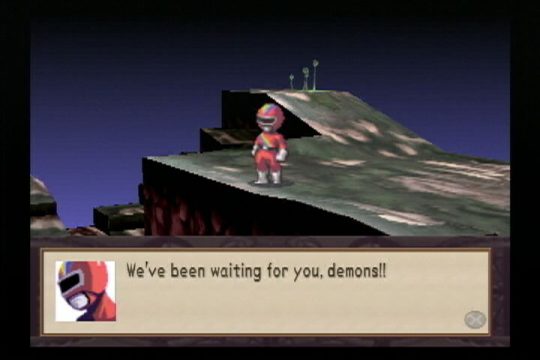 Better that you leave questions at the door.

As to how these combat techniques are learned, it’s a fairly simple matter of gaining enough proficiency with the weapon required to use the skill. Given that every humanoid character can use any weapon, the addition of classes should be a moot point, right? Not exactly. Classes, rather than affecting things like what kinds of equipment can be used, alter the speed at which each weapon-type gains proficiency. Obviously Warriors gain skill with melee weapons more quickly than an Archer would, while missile style weapons – including guns – lend their power more freely to the Archer. One strange quirk about this class system is that characters cannot easily change classes early in the game. However, because it is so easy to create new characters in new classes and level them rapidly to where the rest of your army is at, this isn’t as big an issue as it would appear.

While you’re spending your lifetime battling the comical denizens of the Netherworld, you will be treated to an aural experience that is two-fold. While the music isn’t much to inspire most poetic hearts, it is upbeat, fitting, and doesn’t grind you closer to the mute button. Strangely, one of the more fitting tunes in the repertoire is ‘The Invasion From Within’ by Tsunami Bomb. Whereas some companies throw in a pop song just for good measure, this particular track is used to good effect on several occasions in Disgaea, including a boss battle that helps set the mood for much of the game. On the other side of the fold comes the voice acting. Dub and sub fans alike can have their cake and eat it, too, as there is an option in the status menu to switch between the Japanese and English tracks at virtually any time. One of the biggest issues with this voice-mode setting is that the voices in combat don’t ever change from English, which could give sub fans a little dose of irritation. 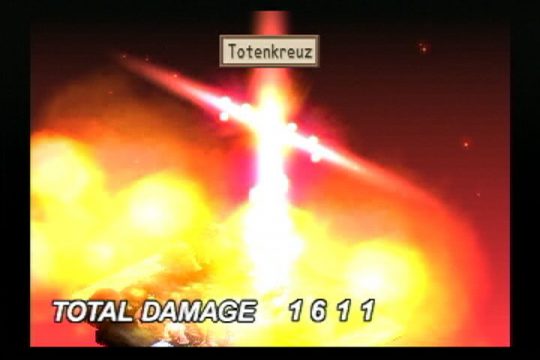 In much the same manner as the audio, the majority of the controls aren’t anything spectacular since menus and analog are the standard and the mainstream in most RPGs these days. Localization, too, seems more of the usual when compared to its contemporaries, though much of the dialogue is comedic in nature and the jokes all manage to be funny and non-cultural for the most part. Even the quirky style of the graphics isn’t really anything we haven’t seen before, and with the PS2’s 3D powers the huge amount of weight given to 2D sprites is somewhat out of place.

Story is something that is highly open to interpretation in Disgaea. It takes a lot of elements from mythology and tosses in a sprinkle of dark comedy, a smattering of innuendo, and a mass of wacky hijinks. Not all that original, necessarily, but a fun one to sit through and try to out-guess the plot twists with. Building on the fun nature of the plot, it should come as no surprise that there are several possible endings to obtain, and hence a heightened level of replay value. Given that there is a New Game + mode, a la Chrono Trigger, and that you can level every character in your army to an insane level of 9999, there should be more than enough new items worlds to explore, skills to learn, and hidden bosses to kill, that anyone could find two playthroughs worth of value in the title.

Looking back on it, Disgaea is undoubtedly one of the funnest games to appear on the PlayStation 2 for a long time. But, with Atlus’ track record of limited prints, if you want some tactical RPG goodness for your PS2, I’d suggest you go buy Disgaea this instant; if not sooner.