I am a huge fan of both Pokémon and Shin Megami Tensei. Oddly enough you’d think that a game that combined both these aspects would be a match made in heaven. That is, if the game was Persona 3 or 4. Unfortunately, prior to those installments of the Demon-Pokémon franchise, there was DemiKids, which was Shin Megami Tensei‘s answer to the Pokémon craze. While these games were fairly popular in Japan, North American gamers thankfully only received the GBA versions, DemiKids: Light/Dark. For the purposes of this review, I played the Light version, which does in fact significantly differ from its Dark sibling in terms of story.

The story behind DemiKids is fairly simple: four school children by the names of Akira, Amy, Jin, and Lena discover the “Akuma Compendium,” in their school library. The “Akuma Compendium” has the ability to summon demons from another world when an incantation is spoken aloud. Amy, who in fact isn’t from their world, explains to Akira and Jin that they are the chosen “DemiKids,” who possess the abilities of darkness and light. It’s then that Akira and Jin are told that they must save their world (Rem) as well as restore the balance of light and dark in the demon world known as Valhalla. Amy further explains that the worlds of Rem and Valhalla are in danger, because a powerful god by the name of Imperius desires complete control of both worlds.

While the premise of DemiKids sounds interesting, its lackluster localization unfortunately makes the plot never feel interesting or entertaining. The translation is very cut and dry, and the dialog falls completely flat. The game has players go from point A to point B, and the story is so minimal that one never comes to understand what entirely is going on outside of Imperius’ desire to take over the world. While there are some instances of death and betrayal, a lot of the plot seems like it was thrown in without any real explanation. Atlus could have gone above and beyond to make the plot more concrete, but unfortunately the story stays bland and uninteresting throughout. On the other hand, at least the localization wasn’t as confusing as, say, Revalations: Persona‘s. 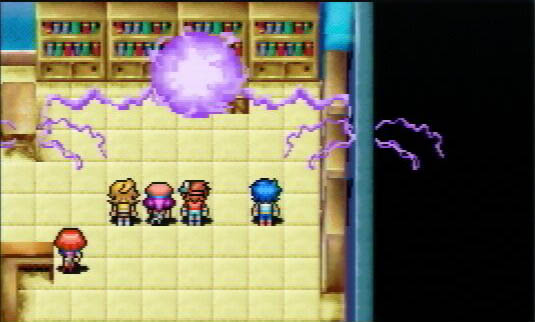 DemiKids‘ faults are many, and come from the fact that the game suffers an identity crisis. On one hand it wants to attempt the maturity of a Shin Megami Tensei story, while trying to throw in aspects of the popular Pokémon franchise through its use of demon recruiting as a core gameplay element. The problem with this is that only one demon remains important throughout, that being the guardian demon, Rand. Even though there are over three hundred demons to recruit, they serve no purpose other than to fill out the roster. Demons can be trained, but they do not evolve or level. Instead, demons must be fused to create higher level units, or they must be fed to the guardian demon so that it may level up. The most annoying aspect of DemiKids is that the guardian demon can only level up if it is fused with other demons, and this takes forever to accomplish, because in most cases for Rand to level up, one has to part with a core unit that they have been using in the main roster. However, Rand is the only demon that evolves, and he has four evolutions throughout, thus netting him more HP and MP than any other demon in the game. Still, the demon recruiting is one of the smaller faults of the game, as at least it provides happy faces to successfully enlist a demon’s aid.

While there are many demons to recruit, they don’t enhance enjoyment of the game’s combat. The first person encounters are sluggish, and the battle animations are bland. It feels as though barely any effort was put into DemiKids outside of the demon designs, which are cute and spunky. Combat takes place in a first-person perspective, and players can hold up to six demons at a time, excluding the guardian demon, making it seven in total. Demons are held in the Demi-loc, a device that stores and and summons them. When a demon is defeated, the next one in line is shuffled into combat. Since demons don’t level, it is important to constantly fuse new and higher level demons. However, the combat feels unbalanced, and at times players will find themselves dying because the demons are at a disadvantage level-wise, often being three to five levels lower than the enemy.

Demon recruitment is also a huge flaw, as the chance to recruit demons is fairly small. Players must use a demon from their party to make a contract with an enemy demon. Sometimes recruitment is as easy as paying fiends with mecca, or more challenging if the demons asks for specific items. Players can gauge the recruitment process based on a smiley face system. If players see a heart, smiley, or an excited face, then the recruitment is mostly successful. If players see an angry, upset or sad face, it means the recruitment was botched, and this gives the enemy an advantage such as an increase of attack or defense, or the enemy is guaranteed a critical hit on their next turn. Demon recruitment is what makes the combat feel unbalanced because often in most cases the percentage for a successful recruitment as so low that players will find their own demons dying left and right because they’ve enraged an enemy. 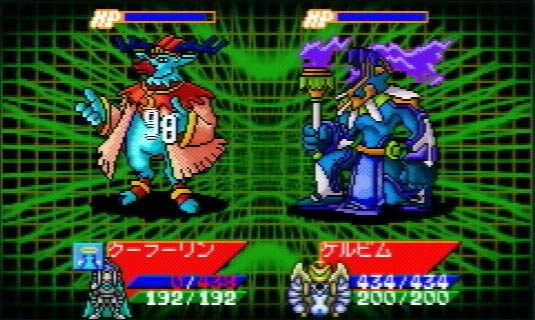 Another strike against DemiKids comes from the game’s poorly designed menu. This menu is cumbersome, frustrating, and unaccommodating. There is nothing more irritating then scrolling through pages and pages to find a demon’s stats, or how they can inherit skills. The Vinecom has so many features, and yet only the “summon” and “set” features are actually useful. Even sorting through items becomes an inevitable chore. There’s no excuse for such a burdensome menu, especially when you need to frequently access it.

The visuals in DemiKids are extremely lackluster. The environments look too pixilated and unrefined, and in most cases they look so dead and lifeless that slogging through them is boring. Add the ridiculous encounter rate, and you’ll grow to resent each area of the game within moments of stepping into them. Dungeon designs are also repetitive and bland: again it feels as though no effort was put into them. The only decent aspects of the visuals occur in the game’s cutscenes, which have decent anime-style art. As previously mentioned, the demon designs are adorable, but they don’t add any depth to the overall visual appeal of the game.

Music is another painful aspect of DemiKids. There is no variety, and the game seems to go through the same six to seven tracks, recycling them throughout. Not only are they repetitive, but they are so boring to listen to through the GBA’s tinny speakers. In most cases, this is one of those games where players will likely find themselves playing their own music, simply because the style and variety is severely lacking. This is disappointing considering that the Megami Tensei games are known for having strong musical scores.

Thankfully, DemiKids is a short experience, clocking in at roughly fifteen hours to complete. The game has zero replay value, and with the identity crisis it suffers, RPGamers are better off playing Pokémon or Shin Megami Tensei if they need a creature-catching fix. For players who enjoy torturing themselves with incessantly slow combat and an underdeveloped, boring story, there might be a tiny bit of fun in this game. DemiKids isn’t worth wasting time on, even for anyone remotely curious about this experiment gone wrong.