Journey Into the Depths of Frustration

Dungeon crawling is the heart of almost any RPG — the sense of danger, exploration, and discovery. For Deep Labyrinth, this is everything; the game is one long dungeon crawl. Originally developed as a cell phone game, this title has evolved into an adventure for the Nintendo DS, expanding to two screens and two adventures. What makes Deep Labyrinth distinct, however, is that it is a 3D first-person action RPG that utilizes the touchscreen and the microphone. Furthermore, the game has scenario designer Masato Katou and composer Yasunori Mitsuda in its credits. However, this is where the impressiveness ends and the trouble begins.

The first part of Deep Labyrinth is a tale of a boy and his dog, while the second, an adaptation of the original cell phone game, is a serious story of an anonymous hero. Both tales are as deep as a mud puddle, although they deserve credit for being somewhat original. The boy must search for his parents in a world that serves as the trash disposal for the unimportant memories of humans. It is also a world that a pink elephant, a purple platypus, and scores of idiotic mice call home. Like any scared child, the boy frequently whines about his quest, reminding the player of his goal every ten minutes or so. The second quest deals with more serious issues, including suicide, and a slightly intriguing mystery. Nevertheless, those seeking a deep story should look elsewhere. At least the localization makes the story clear.

In combat, trust not in the sword and shield, but the stylus and touchscreen. These are responsible for every action in Deep Labyrinth. Buttons on the right side of the screen toggle the different modes. Players may swing the sword by tapping on the touchscreen, or dragging the stylus to control the direction of the swing. In magic mode, spells may be cast by drawing specific shapes called kirie on a grid. Shield mode, however, is pretty useless, as it does not block much damage and it is much better to melee or nuke the monster to death, or tap the left or right side of the control pad twice and sidestep an attack. 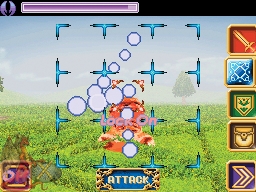 Unfortunately, foul beasts lurk within this battle system, far more troublesome than any creature in the labyrinth itself: interaction problems. The magic grid is really wishy-washy about drawing kirie; sometimes a sloppy kirie will pass, and sometimes a nearly-perfect kirie will not. There is also difficulty in toggling to another menu option, such as the sword or item pocket, after casting a spell. The delay after casting is an annoyance in dire situations and fast-paced endgame fights.

And that’s not the end of the game’s interaction woes. Some enemies should be struck at a distance with magic, but one has to line them up with the precise middle of the center square of the grid. Otherwise, the spell whizzes right by the enemy. This is easier said than done because lining up requires more precision than the controls can provide. Nudging left or right almost always pushes the grid over too far or triggers the sidestep move if the nudges are too close together. In the second quest, characters will talk to the hero during and after combat, but because the player is already tapping the screen to attack, it advances the text too quickly and the player will miss the dialogue. 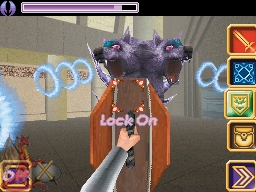 A shield won’t save you when you forget to feed Fido.

Worst of all, the hero can get stuck on corners, doorways, and decorative objects. Even though the view is 95% or 100% clear, the player cannot target and attack an enemy, or a spell will fizzle against the nearby obstacle. If the character is walking forward, he will somehow clip the edge and slide to the side instead. Oh, and by the way, this doesn’t apply to enemies, who can still target and attack the hero around corners and objects.

On the bright side, Deep Labyrinth has above average aesthetics. The 3D graphics are vibrant and striking, and the game moves smoothly with no lag, except in the final dungeon of the first quest where there are many enemies and environmental details to render. Cutscenes, particularly those with large bosses, spread over both screens, usually with the head of the boss on top to give the sense of looking up at it. There is some repetition in visuals though; palette-swapped monsters and distinctive floor patterns — such as a manji-shaped room — tend to recur.

In addition to mostly pleasing visuals, Deep Labyrinth features Yasunori Mitsuda’s Celtic-inspired compositions. Most of the pieces are good, with only one bad, repetitious track that consists of five notes. Unfortunately, this track plays while the hero is talking to NPCs, so the player hears this track frequently in the first quest where every room has a few mice and one save point platypus to speak with. The sound effects are rather dull, and the voice acting in the first quest is emotionless and mediocre, thus bringing the sound score down even more.

Deep Labyrinth is mostly easy, aside from the frustrating interaction issues, and each quest takes a little more than 8 hours to complete. There are save points on every floor, and the game bestows far more healing items than a player could ever use. Dungeons may be long and twisting, but each floor often consists of a pattern in which there is a branching path, with one route leading to a locked door, and the other to the key. Early boss fights are a joke; players can simply lock on, run in a circle around the boss, and swipe at it with the sword until it is dead without suffering a scratch themselves. End-game bosses are sometimes surprisingly difficult, and this is exacerbated by the flawed interface. These fights require lots of running while drawing kirie. It’s easy to collide with walls and decorative objects because the player is required to draw accurate kirie on the grid while looking through it, watching where he or she is going, and dodging attacks.

Deep Labyrinth has a good chance at becoming a cult hit. Those who adore unique games, particularly DS games that rely on the touchscreen and microphone, will enjoy this title. The gameplay can be exciting at times, and there are some puzzles that involve blowing and screaming into the microphone. However, those who dislike problematic interfaces, lackluster stories, and DS interactivity gimmicks should stay far away from this labyrinthine fiasco.