Wicked Studios attempted something laudably ambitious with Dawn of Heroes: a tactical game that completely broke the mold. Despite that goal, Dawn of Heroes makes the mold look rather attractive, considering how frustrating this game manages to be. Some of the concepts it explores are interesting, but as a whole Dawn of Heroes is an object lesson in execrable execution.

The story in Dawn of Heroes is perfunctory and uninteresting, save as a platform from which numerous jokes are launched. Its basic tenet of an evil being that must be stopped by a plucky band of heroes is never elaborated upon, and the characters are not developed in the slightest. Indeed, despite many characters joining the party after the game begins, only the first four ever appear in the jokey plot developments, and as these four have no real characteristics (except that one is an idiot and will invariably prove it, in scenes that are supposed to be funny and sometimes are), the ability to skip the dialogue is welcome.

At first glance, combat seems similar to many other tactical games. The player chooses five combatants to engage in combat, and upon victory, experience is awarded to the conglomerate of all characters, not just the ones who participated in battle or individually. The game initiates a concept called Fair Play, whereby no character can be acted upon more than twice per turn, unless that character is either a boss or the last remaining combatant on one side.

Key to Dawn of Heroes‘ combat, and source of frequent aggravation, is the enormous array of abilities possessed by both sides that trigger randomly. Non-random abilities already turn many battles into something more akin to a puzzle game than tactical combat, requiring the player to learn exactly what method is necessary to win, but the random abilities really amp the aggravation up to eleven. Sometimes attacking an enemy can cause the character that did it to run away, a character can automatically revive after being knocked out, a boss can randomly throw the entire party around the battlefield, an enemy’s offensive abilities can suddenly increase in effectiveness for a turn — the list of ailments continues far beyond these. Particularly late in the game, luck instead of skill can be responsible for victory, and whatever tactics are employed cannot undo that. 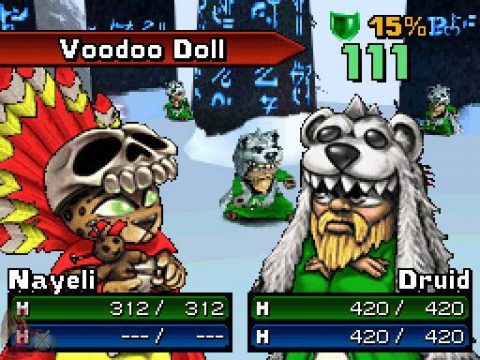 Do these characters appear reminiscent of a certain trading card series that was derived from Cabbage Patch Kids?

The fact that every character is the same level theoretically makes it easy to switch between different battle setups to experiment, but the level of a character is not as important as the equipment he or she wears. Weapons obviously enhance attack, but armor and accessories increase a character’s HP by dramatic amounts, along with often conferring useful battle effects, turning unequipped characters into nearly useless targets. Equipment can be purchased from a few shops in the game, but doing so requires money, which can be obtained along with random equipment rewards post-battle. The inventory arrangement in Dawn of Heroes is incredibly cumbersome, demanding that the player look at each character individually to determine if a piece of equipment is usable. This process is mandatory after every battle, because the game forces players to decide what to do with all new item drops, individually, before returning to the world map. New characters come along frequently, and the player must decide whether to forgo the cash that can be accumulated by selling currently useless material, or to store it for an indefinite time.

Following boldly in the feeble footsteps of Archaic Sealed Heat, Dawn of Heroes is a tactical game controlled solely through the touch screen. It does make one improvement to ASH‘s annoying design, by allowing the D-pad to scroll around the battlefields and inventory, instead of forcing those aspects to be done with the stylus. Instead, the main offender in DOH‘s interface is the small size of many icons that must be touched, requiring a steady hand and some patience in case the wrong thing ends up being prodded.

Dawn of Heroes‘ visuals are certainly unique in their evocation of Cabbage Patch Kids, but the look is just a little off for that series, making the onscreen combatants resemble the Garbage Pail Kids more. The look is distinct, but as rendered by the DS, not particularly attractive. The game appears to love its look, as every combat animation must be viewed in full. This is not always a problem, but anytime an ability affects every character onscreen and every one of their animations is displayed, it becomes very tiresome and unappetizing. 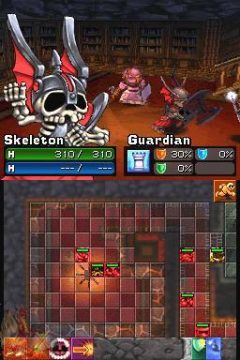 The skeleton doubtless has a friend that will revive it, making the undead even more annoying.

The music is not always great, but manages to be pleasant for the most part, with enough variety to never become dull. A few quite catchy themes are present, meaning that there is usually a reason to keep listening. The sound effects are another matter entirely, with far too few recycled constantly when they weren’t captivating the first time.

Dawn of Heroes uses the interesting practice of placing the maximum level at twenty-five. By the end of the game, the player will have reached this, and thus grinding is impossible. The game is not particularly difficult, but the absence of the option to become any stronger towards the end makes the final battles quite irritating. One thing that ameliorates the inconsistent challenge is the lack of a Game Over screen: losing will simply prompt a retreat, so that the fight can be tried again.

Admiring Dawn of Heroes from a distance is fairly easy, as it does some different things and carves a distinct identify out for itself. It frequently plays more like a puzzle game than a tactical game, however, with large doses of luck being required to come through some encounters. The bothersome interface aspects ensure that playing the game is more a chore than entertaining, relegating it to the status of yet another disappointing DS game.