You Can’t Make an Apocalypse Without Breaking a Few Seals

What would happen if Ganondorf successfully wiped Hyrule off the face of the earth before Link started his inevitable journey to stop him? That’s not quite what Vigil Games did with their action-adventure title Darksiders, but it’s pretty darn close. Taking undeniable cues from Nintendo’s acclaimed Legend of Zelda series, Darksiders is a blatant copy-cat game. But it’s a damn good one.

After prematurely starting the Apocalypse, War, one of the four horsemen from the Book of Revelations, is tasked with figuring out what happened and taking vengeance on those responsible. To do this, he needs to return to Earth, now infested with the warring factions of Heaven and Hell, and make deals with both angels and demons in order to uncover the truth. His journey takes him to several distinct locations where he must solve intricate puzzles and defeat bosses using the unique tools he finds there. Sound familiar?

To say that the gameplay of Darksiders is a total knock-off of The Legend of Zelda isn’t entirely fair. It also manages to be a knock-off of God of War, and even Portal in a particular section of the game. That said, this is not necessarily a bad thing. Darksiders may not have much originality outside of its setting, but its mechanics are put together beautifully, and the game is ultimately a lot of fun to play. 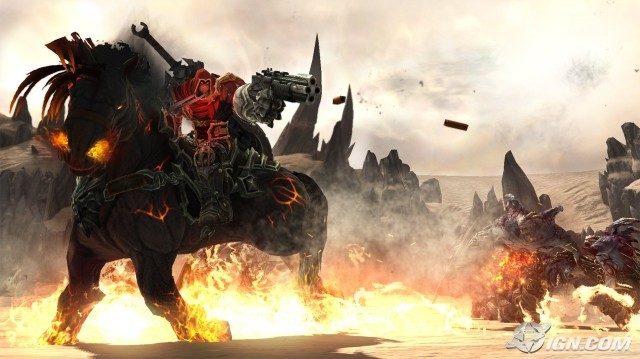 A horseman for the 21st century.

As War, the player has access to a number of unique weapons and abilities. First and foremost is his enormous sword, the Chaoseater, which is his primary method of attack. He also gains access to a wide-sweeping scythe and a gauntlet with a powerful knockback attack. These three weapons form the basic elements of combat, and War can perform combos and special abilities by either tapping or holding the X and Y buttons. He’s also able to quickly dash in and out of combat and jump and glide as needed. And it will be needed, because enemies hit brutally hard.

The basics of combat play out much like God of War, but elements of Zelda combat find their way into the game through the subequipment War discovers on his travels. Six unique subweapons can be equipped, and each has a different function, many of which are fundamentally similar or even identical to a Zelda counterpart. The Earthcaller is a horn that’s used to open gates or knock down enemies in combat. The crossblade is a shuriken-like throwing weapon that can be used to strike distant switches or flying enemies. The abyssal chain functions much like Link’s hookshot, allowing War to grab distant objects and enemies and either pull them to him or pull him to them. Mercy, War’s pistol, is used for long-range combat, though it doesn’t serve any puzzle-solving purpose. The Mask of Shadows allows War to see hidden objects, and the Void Walker lets him create portals in specific areas to instantly transport him from one location to another, mimicking Valve’s popular puzzle game Portal. Being a horseman of the apocalypse, War naturally ends up with a horse he can ride in certain areas, yet another similarity to Nintendo’s franchise.

But as I said before, the blatant copy-cat techniques that went into this game’s design are overshadowed by the sheer quality with which its all assembled. The dungeons are as clever and exciting as any Zelda game, and the combat is as fast and furious as God of War, even making a handful of improvements such as a single-button command to launch a grisly finisher on a near-death enemy. The game even encourages going back and exploring previous areas, as some hidden chests might not be accessible until a certain tool is found. The boss fights combine Darksiders‘ two inspirations together, taking the massive scale and puzzle-oriented combat of Zelda and mixing it with the brutal finales that God of War is famous for.

Darksiders also provides a certain amount of character customization. As you make use of your sword, gauntlet, and scythe, they gain experience and become more powerful. Similarly, as you defeat enemies, you are rewarded with souls which can be spent on learning new weapon and subweapon attacks, purchasing healing items, or learning new Wrath skills, which are special abilities that can do tremendous damage or augment War’s capabilities in different ways. One of the unfortunate problems with the game is that souls are gained at a rather slow pace. It will require a lot of extra combat to purchase all the upgrades available in the game. Likewise, it is similarly difficult to restore health. Chests that restore health are scattered throughout dungeons, but they are one-time-only deals, and once they’re gone, you’ll usually need to spend hard-earned souls on healing items in order to restore lost health. More readily available health sources would have gone a long way to improving the game. 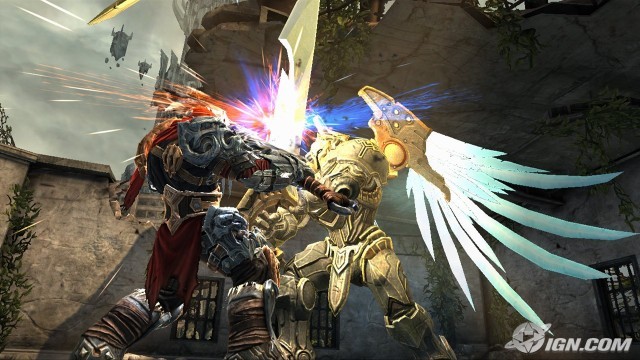 Tearing the wings off of futuristic angels in glowing armor is only one of the many brutalities Darksiders offers.

While it avoids breaking any new ground in the gameplay department, Darksiders does provide a fairly original environment for the game’s happenings. The art style is equally intriguing, featuring fantastically grotesque demons and angels with a sci-fi bent to them. The animations are excellent, and every enemy in the game has some sort of brutal death scene that can be triggered when they’re almost dead. The most basic of these are quick and bloody, but some of the more powerful enemies go into great detail. The bosses in particular tend to be finished in particularly brutal manners. A giant sandworm has the length of its body split open, while a giant, Satan-like demon sees War teleport inside its head, splitting it open from the inside. The creativity and over-the-top gore in the death scenes are probably one of the game’s strongest points. It should be noted that there are some minor graphical hiccups, but thankfully they don’t interfere with the gameplay, and a patch is forthcoming.

The sound is of equally terrific quality. The voice acting is solid, particularly Mark Hamill’s performance as the Watcher, which bears some resemblance to his portrayal of the Joker in last year’s Batman: Arkham Asylum. Likewise, the music is appropriately biblical and sets the tone perfectly, though the pieces aren’t catchy enough to remain in your head for very long.

Being derivative is generally seen as a bad thing, and copy-cat games usually don’t get much attention. However, Darksiders proves that being a copy-cat is alright if you manage to equal the source material in terms of quality. With a decent-sized quest of roughly twenty hours and an adjustable difficulty level, Darksiders should be able to tide over both Zelda and God of War fans until their respective franchises see new installments. The game also ends with a set-up for a potential sequel, so hopefully this won’t be the last we see of the end of the world.