Underneath the Purple Fog

It’s the close of the 1800s, and the Exposition Universelle will be kicking off in the near future.  The age of steampunk invention is well underway, with the world’s three richest powers — the Americans, the British, and the Chinese — all converging on Paris, France to compete in the Exposition.  Curious Expedition 2 is a turn-based roguelike RPG, set in a reimagined version of the late 19th century, with oodles of possibilities to ensure each run plays a little differently each time. Each run relies far too heavily on luck, with a predictable story and mediocre sound design. However, an engaging exploration system along with a flexible party setup make this expedition worth it, for the right kind of explorer.

Islands have been cropping up in the oceans lately, replete with technological marvels to be discovered.  These treasures are not without their danger, islands are rife with tribal feuds, dangerous animals, and strange flora, not to mention a mysterious purple fog that makes travel hazardous. It’s up to the player to chase as many free-form explorations as can fit in a game year, while tackling a story-driven mission to chase an alien artifact that can either bring world harmony or cause mass destruction.  The story isn’t deep, and there are no real secrets regarding how things are going to end, but there’s enough content before and after each mission to bring it all together into a cohesive package. 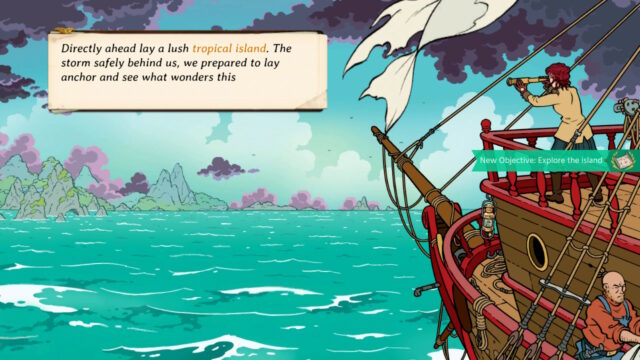 The story is simple and predictable, but it floats the gameplay along adequately.

The game’s sound design doesn’t do much to support the story; exploration tracks lack memorability, big moments lack impact, and sound effects rarely match the adventurous feel of the game.  It’s almost as if it was all designed for an entirely different title, and then slotted in, but a square peg does not fit in a round hole.  The graphics on the other hand fits the adventurous steampunk theme perfectly, with animated characters just self-effacing enough to be over the top in a funny, engaging way.  Also a definite weakness of the Nintendo Switch version is crashing; this is most prevalent in the third and fourth acts of the game’s main story, and can mean redoing large swaths of content if the map’s recurring autosave isn’t especially recent.

Thankfully, Curious Expedition 2‘s gameplay manages to eclipse the weaker parts of the title.  The player is offered two options for their protagonist at the start of their run: a combat-oriented general, or an exploration-detailed leader.  From there, players can choose who to add to their party by recruiting members at the bar or through a trio of Clubs, which provide the funding behind these myriad expeditions.  Generally, all party members will have one boon and one drawback to begin; for example, a priest’s boon allows a party to rest at a mission for free, but could be an alcoholic and grow angry when booze is not provided to him on a regular basis.  Angry characters are less productive and may ditch the party in the middle of an expedition or develop even further drawbacks.  The party system is one of the strongest points of Curious Expedition 2 because there’s no single correct party to navigate the game; with a maximum of five party members, numerous human classes, and a multitide of animals that can come along for the journey, how each player will overcome obstacles can vary wildly.  One loop through the story could rely heavily on a translator and an explorer, with a pacifistic bent, while another run could focus on a party of expert explorers, and yet another playthrough could be loaded up with aggressive characters that mow down anyone, or anything, in their way.

Experience is accrued in a general pool and can be doled out to party members during explorations when not in combat or visiting island landmarks, like a village or a shrine.  Exploring islands, winning battles, completing quests, and returning triumphant to Paris after an expedition all award small amounts of experience.  Though each amount is small, it all adds up, and each level is desperately needed to survive in the wilds. Ensuring party members receive their fair share of experience is important, as a happy party member is also a loyal party member. Loyal allies will put up with a lot of hardship, while those of low morale will walk away, taking their special skills off the boat. 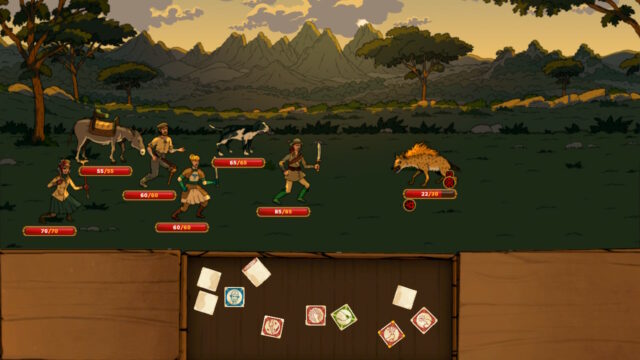 Successful combat relies on the toss of mercurial dice.

While combat isn’t required for a run — in fact, there’s in-game rewards and possibly penalties for not keeping to a pacifist lifestyle — like many things in Curious Expedition 2, it’s all about being lucky.  At the start of each combat round, the player rolls dice, and uses those to build up attacks.  What dice each party member rolls depends on the type of weapons each is wielding, and each weapon is limited to a single die colour.  All dice types can dish out damage, though each also has a specialty: blue focuses on buffing and debuffing, green focuses on delaying or removing enemy turns, and red applies a damage over time bleed.  The most effective attacks always have a repercussion, such as self-damage or a debuff to the party, so players will need to balance riskier attacks with high damage potential alongside deleterious effects, or lower damage attacks without blowback.  As with all things in Curious Expedition 2, the answer is usually found between the two extremes.

By and large, exploration and combat is smooth sailing, though if there’s one thing that can beach an adventurer it is crummy luck.  Even the most prepared adventurer will run into bad dice rolls and other unpredictable exploration events, and that’s before taking into consideration the game’s sanity system.  At the start of each expedition, the adventuring party begins with a certain amount of sanity, which is depleted slowly as the player explores, and can quickly run out by choosing risky paths over rough terrain, or having unlucky dice. While it can be refilled with supplies bought prior to an expedition, cargo space is precious, and carrying around too much means travel is that much more arduous.  There is a time limit to travel as every island is ringed by the mysterious purple fog. This fog slowly but surely takes over the full landmass, the effects of which can take a full in-game year on easier difficulties to be felt, but every move counts on more challenging settings.

A blessed counterbalance to the mercurial luck system is a trio of Explorer Clubs.  Each fronted by a different nation, the Clubs unlock increasingly lucrative rewards the more often the player elects to go island hopping under their purview.  When an exploration is successful, the party will accrue renown with their chosen Club, which in turn unlocks more items to bring on adventures, unique party members, and a special service.  The American-run Lux Labs offers weapon upgrades, the Taishi Academy offers character training, while the British Royal Avalon Society cures ailments. The currency for unlocking these options is tickets, which are rewarded for completing adventures, and bonus tickets can be accrued by completing an exploration while hauling back treasure. These are the permanent upgrades in Curious Expedition 2, and future runs are simpler for the increasingly lucrative unlocks each provides.  Players will want to build up a couple levels in each before selecting a single one to specialize in. 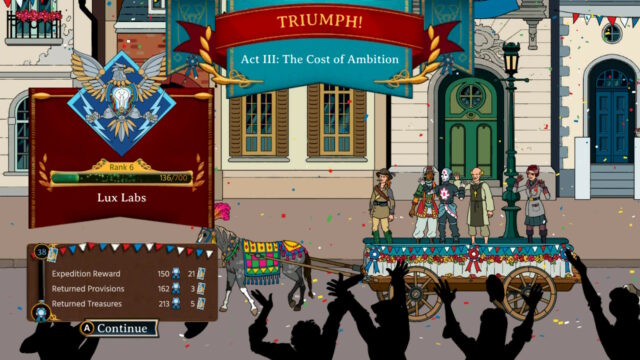 A successful mission means prestige and rewards waiting back in Paris.

For those looking for a different level of challenge, there’s a trio of ways Curious Expedition 2 permits players to tweak their experience. First, there’s an overall difficulty which dictates how much the game throws at adventuring parties. Second, there’s the consequence of failure, ranging from restarting the current exploration as if nothing happened to permadeath.  Third, each time the player departs to an island, there are generally three options to choose from, each with varied complexity.  Despite all these options, even on the easiest difficulty, failure is almost always imminent, and disaster is far too often unavoidable.

Somehow, despite the game’s flaws and technical hiccups, something manages to pull me back towards just one more run; if there’s any sign of success a roguelike can aspire to, that’s certainly a good one.  There’s no fancy math that calculates the ephemeral fun factor some games manage to capture that makes them better than the sum of their parts. Curious Expedition 2 won’t be for everyone; there are problems not all RPGamers are going to tolerate. But for those willing to try their luck on this engaging adventure, there are treasures aplenty on those islands to uncover, just consider adventuring with the sound off.