Slay Bells with a Lovecraftian Twist

‘Twas the month before Christmas
And all through the site,
RPGamer was invaded,
By Lovecraftian fright.

The demon, a terror,
Though his powers all drained,
To save this great day,
Had been summoned again.

Santa’d been kidnapped,
So to the tent’cled mass,
All eyes turned in horror:
Cthulhu Saves Christmas‘

Zeboyd Games brought back Cthulhu just in time for the holiday rush. With a Nintendo Switch physical release handy, Cthulhu Saves Christmas is now a timely gift for any fan of parody RPGs. With a plethora of great writing and a battle system with tons of options, this RPG should bring a smile to anyone that enjoys the most wonderful time of the year.

Cthulhu Saves Christmas brings back the devilish anthropoid, with the game acting as a prequel to Zeboyd’s first attempt with the character as an unlikely protagonist in 2010’s Cthulhu Saves the World. This time, Cthulhu wakes up to find a wonderfully wrapped present waiting where that which sleeps may eternal lie. Upon opening the gift, Cthulhu find himself stripped of his world-destroying powers and his zany quest to put a hurting on the perpetrators begins. 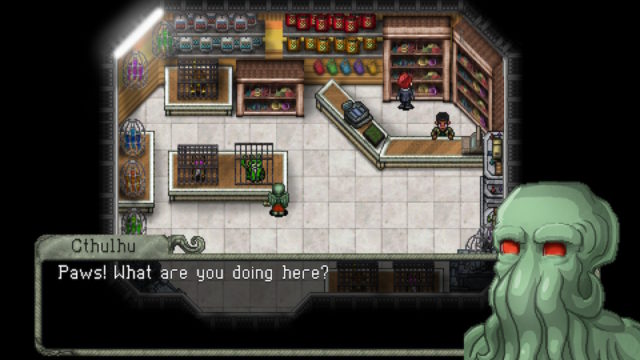 Much of what makes Cthulhu Saves Christmas a blast to play is due to the incredible writing present throughout the game. The characters are constantly breaking the fourth wall and whimsical quips fly around from the start of the game all the way to the end. Zeboyd doesn’t shy away from referencing its previous titles either, but the shamelessness is on the nose and meant to be comically blatant. The writing extends to battles as each enemy has witty descriptions, and most bosses have some Christmas connection during the story sections.

The game is broken down into segments that take the player to Christmas Town and eventually to a dungeon to thwart the henchmen of the vile League of Christmas Evil gang. The world is stuck on a perpetual Christmas Eve à la Groundhog Day, though this allows Cthulhu to scamper around town where events with townsfolk or party members occur, letting players build up R’lyehtionships. Not only do these events result in new gear upgrades, but they are also packed with hilarious writing filled with holiday puns. R’lyehtionship events range from having Cthulhu work at the post office, where he fouls everything up, to seeing him suit up as Santa, allowing little kids sit on his lap at the local mall. Players won’t be able to experience all the R’lyehtionships in one playthrough, though the Switch version has a New Game Plus Mode which carries all data from the first run and allows the player to continue watching the sketch comedy skits. 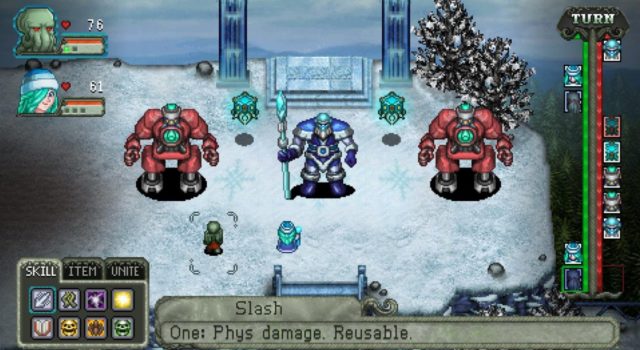 Jack Frost and his band of frozen flunkies.

Combat takes a lot of ideas from other properties and bundles them together for a fun, fast-paced, engaging affair. Think Final Fantasy Mystic Quest mixed with turn-based ideas seen in Cosmic Star Heroine. Characters have Hyper Bars that, when filled, let characters unleash more powerful versions of their moves. Some moves are reusable, but normally once used these abilities are crossed out and only accessible again after that character defends. There are also items and unite attacks, which can be used once per battle, with some equipment allowing them to be used more often than once. There are many options for players to pick when deciding a battle strategy.

There are three levels of difficulty to choose and players can easily switch between them to find the most suitable level of challenge for their playthrough. Characters get full HP after each battle, so there are no penalties carried over from fight to fight. There is an extra difficulty setting that opens up in New Game Plus that scales enemies to the player’s level for some additional challenges. A counter on the bottom right that shows how many random battles are left. Once the counter reaches zero, players can explore the dungeons without incident. Beyond the festive environments, the dungeons don’t really have a lot of substance within them. 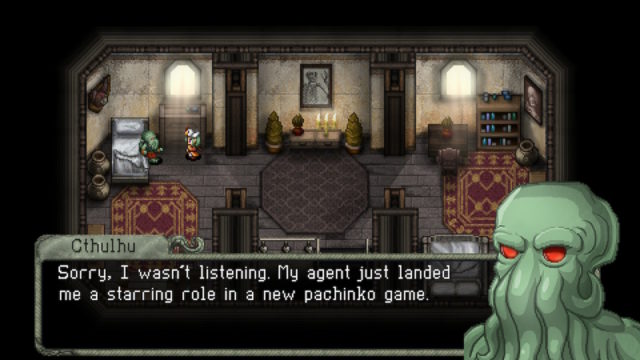 His agent must also represent Konami!

The graphics in the game are also top-notch as all the sprites are vivid and create a wonderful world to explore. The battles and dungeons are all packed full of holiday decor, which really makes it feel like that magical time of the year. The same goes for the game’s music — composed by Joshua Queen — as most of the tracks go along with the Christmas visuals to create a perfect harmony. There is even a track that evokes Trans-Siberian Orchestra’s version of “Carol of the Bells”.

The one issue with Cthulhu Saves Christmas is how short the entire experience is. The game can be completed in a mere five hours, which might last one single playthrough for those that are engaged and enjoying themselves. Though it’s a bit short, the game is thoroughly entertaining from start to finish.

I usually like more meat in my RPGs, but everything that Cthulhu Saves Christmas tries, it succeeds at. The game constantly put a smile on my face, and it felt like it was Christmas as I played and giggled at the Christmas puns or hummed along with the familiar jingles. It was a jolly time from start to finish, though like Christmas, I wish the experience lasted a tad longer.