Catching the Essence of Monster Taming

Monster-taming games have a big fan base, but even with the most famous franchise continuing to release new entries, the golden age of these games seems to lie a couple of decades behind us. Fortunately, Coromon is an ideal game for players who miss those days. Freedom Games and TRAGsoft’s monster-taming RPG features a pixel world, turn-based battle system, charming puzzles, and a vast array of monsters to catch. It’s a great homage to a subgenre and a whole era of video games, yet it sadly lacks meaningful, innovative ideas.

Players take on the role of a newly hired Battle Researcher for a high-tech lab called Lux Solis. The job consists mostly of catching and training Coromon, wild creatures that can be trapped by using spinners. Players choose from three different Coromon as their initial monster and begin their journey to tame them all. This simple premise sounds like a shameless copy, but the game adds something to justify the travels. Besides the duties of a researcher, players are given a special assignment: gather the Titans’ essence, a power strong enough to change the whole world, before a nefarious organization uses it to do evil. The journey allows players to enjoy catching, training, and evolving creatures while dealing with the Titans, which serve as a motivation to travel around the world. The game doesn’t expand upon this initial setting, but the substories of each town allow players to be amused by the peculiarities of this world. Apart from a few moments when the story needs to use a solemn tone, the script is mostly delightful and humorous, with emojis reflecting the emotions in a funny way. This balance permeates throughout the game, and at the end, the story is easy to digest and enjoy since everything is taken lightly and with a smile.

Coromon is set in a pixel world. Each region has different climatic conditions, sights, and wild creatures. Graphics are charming in a childish and comedic way, matching the dialogue between characters. The sprite of the player character is highly customizable, with fashionable accessories scattered around the world to personalize their look. Coromon are visually a great mix of tenderness and power, with most looking almost harmless in their early stages and becoming imposing when they evolve. Faithful to its retro concept, the game doesn’t include voice acting and the music mimics the sounds of older platforms, using synthesizers and synthesized guitars that effectively sound retro. The soundtrack includes more than 50 captivating tracks that are a great callback to the games of the past. Sound effects, which include the characteristic calls of each Coromon, are great and fit the music and visual style nicely. The art as a whole is solid, enjoyable, and never breaks character. 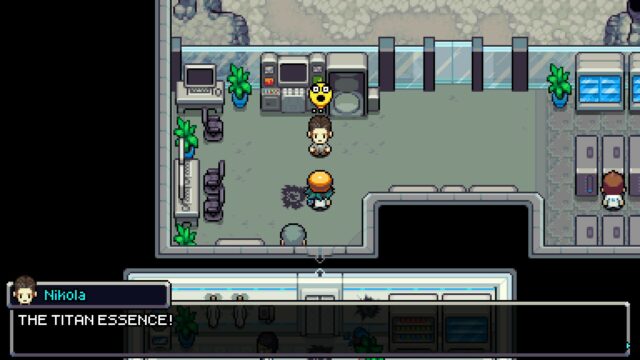 The use of emojis is a nice inclusion to emphasize reactions.

The turn-based battle system is very classic. Abilities cost stamina points, and fighters can recover half of their stamina if they use their turn to rest. Battles are mostly one-on-one fights, except for a few occasions when more than one wild Coromon appears at the same time. Players have a gauntlet with six slots to carry their Coromon, with the rest of the creatures sent to storage accessible in every town. Each Coromon has an elemental affinity, which determines its weaknesses, and a set of abilities that they learn as they level up. All offensive abilities are elemental, making them very effective or not effective depending on the enemy. Buffing and status ailment abilities are interesting table-turners too. Weather conditions can affect monsters, with cold weather capable of freezing them, for example. All these elements join in a satisfying way, but the battle system as a whole lacks something innovative to stand out.

Besides wild Coromon, various researchers challenge the hero along the way. Trainers use several creatures of high levels, which makes these battles a little bit more challenging. Bosses, however, take the challenge to a whole new level in a negative way. These foes have an impressive amount of HP and devastating attacks that can kill Coromon with one strike, making some of them feel unbalanced against the rest of the enemies. A couple of them may even require players to grind to beat them, which isn’t welcome at all.

The diversity of Coromon is satisfying, with most of them having one or two evolutions that substantially boost their stats. There are more than one hundred creatures, and each has three types: standard, potent, and perfect. Most of the encountered monsters have a standard potency, but the game encourages researchers to find and capture potent and perfect creatures since they are stronger and slightly different in their appearance. After each battle, all the Coromon that were active in the battle receive experience. There are two different bars that increase with experience: one for a traditional level-up system and another that allows players to further increase the stats in a personalized way. It is great to have the option to boost monsters’ stats as players desire, making the Coromon feel more personalized. 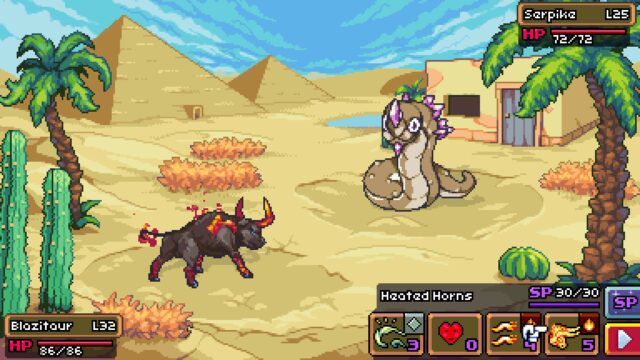 The variety of abilities and monsters is great.

Coromon invites players to explore every corner of its world. Apart from storing the Coromon, the researcher’s gauntlet includes some powers such as moving rocks or burning plants, which are needed to advance and, occasionally, get to chests. The puzzles in the dungeons are varied, interesting, and never feel too challenging. They range from flipping switches to deciphering a color code. Besides puzzles, each area refreshes the gameplay by making players adapt to the environment, such as dodging traps in a pyramid, finding shade from the blistering sun, or sliding in the snow. With the mix of these elements, traveling to each town and clearing dungeons are the best features of the game.

Each town has a transporter that enables players to fast-travel to each previously visited location, making going back and forth easy. The few sidequests of the game are mostly easy to complete and have helpful rewards. Every activity players do on their journey, from winning battles to catching Coromon, is registered as a milestone. After obtaining enough milestones players will gain a level, which grants them juicy rewards courtesy of their employers.

Beyond item shops and areas to restore the health of monsters, towns also enable the hero to grow plants, which are items that Coromon can equip. While these fruits are consumable and are used in battle as soon as the condition detailed in the description is met, there are other pieces of equipment, such as gems, that lower the encounter rate or grant experience to Coromon who were not involved in combat. The game features the use of scents to affect wild creatures. These scents can increase the potency or level of the Coromon as well as allow players to find harmed monsters that are easier to defeat or trap. Exploring and searching for monsters is pleasing thanks to the wide array of activities and features. 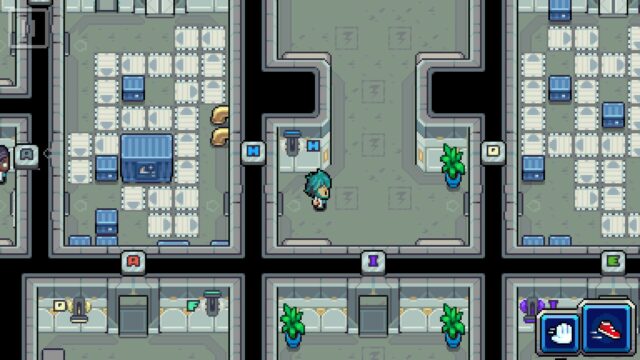 Puzzles are fun and mostly easy to solve.

Players select a difficulty at the beginning of the game, and the diversity of options is worth noting. The different difficulty settings enable players to tailor their adventure as they see fit. These don’t affect the combat, but they restrict or allow some actions. For instance, Coromon recover all health after leveling up in easy mode or they return to the wild after fainting in hard mode. There are four different modes, and there is even a customizable difficulty setting in which players decide the rules of the game. This is extremely welcome since many restrictions would be big negatives for many players but may give others the desired challenge.

Coromon is a vintage monster-catching game with a retro art style. It has no shame in making clear its source of inspiration, but at the cost of lacking relevant new ideas. Nevertheless, exploring this world as well as catching and training monsters is definitely worth the 30-hour journey. It’s an easy recommendation for those who are eager to play a traditional monster-taming RPG.