It’s Out There Alright

A professor is on the run from a mysterious group known as the Cosmo-NOTs. In his attempt to escape, he comes in contact with a boy by the name of Terry. Things do not go smoothly during the chase, and the professor loses the precious cells that he requires. Terry decides to play the hero and help the professor out by collecting the cells that have been scattered around the world of Contact. However, rather than directly control Terry, players take the role of themselves, an outside observer that interacts with the in-game characters via the dual screens, touchpad, and controls.

Since players don’t have complete control over Terry, battles are mostly point and click. Either an enemy attacks Terry, or the player instructs Terry to attack something, be it an enemy, wildlife, or even a person. Once that is done, the player basically stands by and watches as they swing at one another until one falls. Luckily, Terry can accumulate points in a gauge that allows him to perform special moves after a number of battles. He can also eat a large variety of foods that will temporarily raise certain statistics or simply recover HP. These are both directly controlled by the player and offer some additional gameplay. 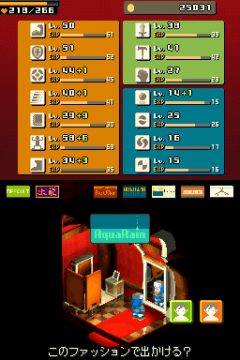 Character management is a major focus of Contact. Plus you’ll want to look your best.

Though the battle system itself isn’t particularly exciting on its own, with the exception of boss fights, normal battles themselves are short and are not the focus of the game. The real emphasis is instead placed on Terry’s growth through his battles and other experiences. Depending on which weapons, clothing, and skills the player has him use, Terry’s statistics and proficiencies will grow in different ways. Even some of the foods that he eats will help determine the rate at which he will develop in certain areas.

Since the focus of the game isn’t on the battles themselves, it should come as little surprise that the game as a whole is quite easy. Powerful healing items that digest quickly are very cheap and plentiful. With the right clothing, it’s also possible to easily gain components for food at no monetary cost. The only real way to lose is to not be paying attention to Terry’s HP.

There is also a lot of growth that can happen outside of battle. Terry can also interact with the townspeople, jog to raise his speed, read to increase his knowledge, learn to cook, fish, and pick up women. His karma statistic is the main factor when it comes to dealing with people, though fame and bravery also come into play at times. Karma can go up or down rapidly depending on his actions. Helping people with their problems is good, but stealing from or picking fights with them yields deductions. Cooking their livestock in order to create new recipes is also frowned upon. Of course, not all people like good guys either. Some prefer Terry to be a bit of a bad boy.

One of the nice things about Contact is that it actually makes good use of the DS’s features. Players can use either the stylus or standard controls for the majority of the game’s actions, so they can choose whichever they like best. Of course, each style has its advantages, but it’s very nice to not be forced into one style of play. The interface as a whole is very nice and user-friendly. Perhaps the only flaws are that the game will occasionally switch the selected special ability and that the professor will often reside in the top screen rather than something more useful, such as the statistics that the player is grinding. That said, the game’s localization and sense of humor are two of its strong points, and it can occasionally be nice to hear the professor say something amusing while wandering through a new area. Most of the game’s humor is in scripted plot points though. 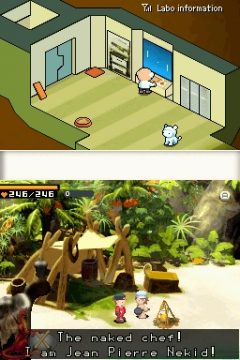 The majority of the game’s story isn’t particularly deep until the end, but it does the job of complementing the humor and bring the main characters to many interesting locations in search of the cells. The storyline itself is a bit on the short side, and it can be finished in about fifteen hours. There is, however, a decent amount of optional material that can keep players occupied for much longer.

As one might expect from a game with a title such as Contact, much of the game deals with flying saucers, aliens, the government, abnormal phenomena, and concepts that are a tad out there. However, what one might not expect is just how out there some parts of the game itself are. Though many costumes have been seen before in the form of classes in MMORPGs, that style of gameplay and abilities that come with classes such as Chef are rarely seen outside of them. It’s nice to be able to play a game with that style with far less grind. The game borrows from a few other areas as well, but it mixes them together in a fairly unique way.

Another part of the game that is mixed is the visual style. The professor and his surroundings have a style that appears to be making an homage to games such as Mother/Earthbound, whereas the screen that Terry and the game’s other characters reside in is far more realistic and colorful. Since the styles, for the most part, remain on separate screens, they rarely clash and add to the charm and unique presentation of the game.

Unfortunately, the same level of praise cannot be given to the sound. While some of the music is above average, a number of the ambient sound effects can become a bit grating after a while. They often feel very out of place depending on where Terry is at the time.

Contact is quite a bit different from the standard RPG. The focus is on character growth rather than on the battle system itself, and it uses an interesting mix of story and humor to keep players entertained. While it isn’t especially deep, it’s a fairly original mix of concepts rarely seen in handheld form with an interesting split visual style. Those looking for something different or for a game that has classes that are generally MMORPG-exclusive will likely enjoy this title.