Chronos: Before the Ashes Review

Remnant: From the Ashes picked up plenty of admirers earlier this year, so THQ Nordic and Gunfire Fires have acted swiftly to take advantage of their success with a prequel that expands the series. Chronos: Before the Ashes is an action RPG that shifts the fighting focus of the series from shooting to close-combat. Playable without any knowledge of its sister title, the game is a worthy contender in the action RPG realm, but loses ground due to its short length and lack of character customization options. Nevertheless, a new respawning approach, appealing visuals, hard puzzles, and an old-school battle system are part of the quest in which the hero will literally grow old.

Chronos: Before the Ashes follows a young adventurer who needs to cross a labyrinth, defeat three guardians, and kill a dragon in order to save this post-apocalyptic world. After selecting the male or female 18-year-old warrior and choosing sword or axe for their initial weapon, players appear in an abandoned research facility where mysterious experiments have taken place, but logs inside the doctors’ computers contain scarce clues of why this facility is linked to the dragon. Although most of the doors in the laboratory are locked, there is an orange stone that teleports the adventurer to a new location where puzzles, enemies, and the three guardians await. After dealing with them, the dragon’s lair is opened, clarifying the relationship between the research facility and the beast. Though it doesn’t do much to stand out, the story includes a couple of brilliant plot twists that makes it intriguing, and the end does a good job encouraging new players to dive into Remnant: From the Ashes to find out what happens next.

An innovative feature is the role death has in Chronos: Before the Ashes. As in many other action RPGs, death is expected, and in this game it isn’t entirely negative. Every time the hero dies, he or she respawns one year older, and when their age enters a new decade, new abilities are unlocked, including gaining more experience or boosting a specific attribute. The age of the character is indicative of how many times the hero has died, so it is interesting to keep an eye on it. This approach ensures players feel a sense of growth despite falling, gaining that little bit extra that may be all that is needed to defeat the most problematic enemies. Fortunately, the character doesn’t get weaker as they age, though physical attributes require more points to upgrade the older the character gets. 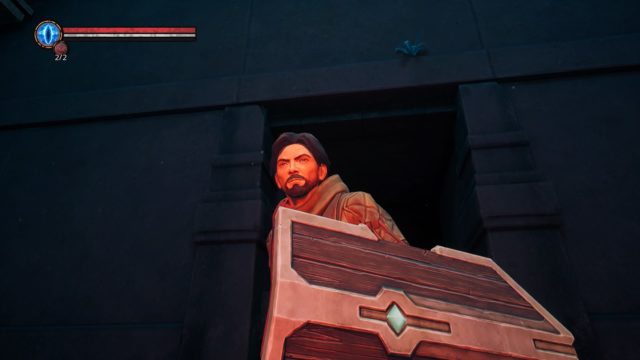 How old the character is at the end of the game will vary between players.

The battle system uses a standard action RPG base, but is one of the strengths of the game. The basic controls allow for normal attacks, strong attacks, blocking, dodging, and parrying. The offensive part is extremely intuitive: normal attacks are fast, strong attacks are slower but make significantly more damage, and charged strong attacks are even more destructive but take plenty of time to be ready. The defensive part is a little more elaborate: dodging is the best way not to receive damage, but it is not always an option; a well-timed parry stuns the enemy and grants time to attack but is difficult to achieve; and blocking highly reduces damage taken but depletes stamina, and if stamina runs out, the blocking stops and the character becomes vulnerable.

Besides these basics, the character can consume healing materials that restock if the player dies. All these elements are nothing new, but the game adds the use of magic stones as a distinctive touch. Every time a dodge, a parry, or a charged attack is used successfully, the magic meter increases, and when it’s full, the character can activate the power of the stone. Each of them can unleash a special effect during subsequent attacks, such as making hits more powerful or absorbing enemies’ health. Although the game is not really innovative in this department, the battle system is enjoyable, and the use of magic stones is a good addition to round up a great fighting experience. It can sometimes be annoying that the character isn’t always as fast as the player, and those slow reactions may bring death as a consequence, but this is rare.

The game uses checkpoints, which take the form of special stones that also act as fast-travel points. Upon death, the character respawns at the stone that was last active. Elements like opened paths and items remain in the state they were, but enemies have to be defeated again. There isn’t very much to bosses and they aren’t especially difficult, yet many common enemies tend to be tough to beat without receiving a lot of damage. Different types of players are catered for by the inclusion of three levels of difficulty, offering the option for a tougher or smoother ride. 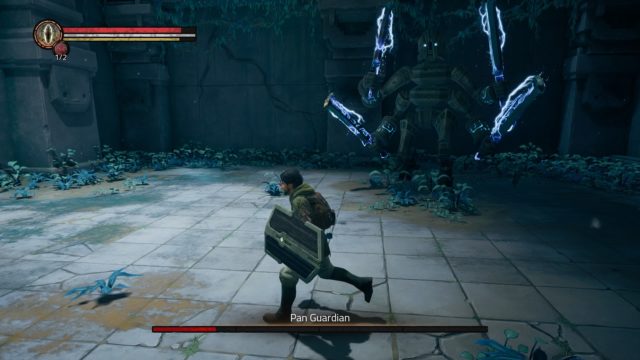 One of the three guardians attacks with four swords!

Every time the hero levels up, vitality is restored and some power-up points become available. The four upgradable attributes are strength, agility, arcana, and vitality, with all offering at least some form of defensive boost. In addition, weapons can be upgraded by using crystals dropped by enemies. Some weapons and shields with diverse strengths — as well as magic stones — can be found by searching in every corner of the maze. The simplicity of only having four upgradable attributes works well as a leveling system, but to have a personalized experience of the character, a change in the armor or outfit would be a great improvement, since the only things that can be switched are weapon, shield, and magic stone.

The only way to advance through the labyrinth is by solving puzzles and searching for items to open new paths, which is mostly fun. The game avoids being monotonous by having distinctive visual features, enemies, and puzzles in each scenario. While some puzzles are cleverly designed, others aren’t very clear and can turn frustrating. Players may find themselves going back and forth trying to find a way to advance because it isn’t always intuitive to know where to go or what to do in a specific puzzle. 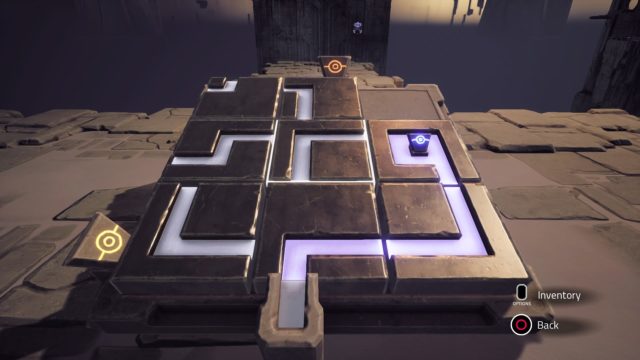 Some puzzles are amusing.

One trait that will surely lure many players is the great visual work. The game manages to set a very appealing mood by having darkened places with highly detailed backgrounds as well as enemies with a wide variety of shapes and attacks. The dragon and the three guardians have great animations and devastating attacks that definitely look imposing. Additionally, it is amusing to observe how the hero grows up little by little. The soundscape isn’t very ambitious: there are few voice acting moments as well as few music tracks, but both work well combined with the visuals.

Those who want to grow wiser and older should venture into this labyrinth filled with puzzles and varied enemies and face the dragon. With immersive visuals and a great battle system, an enjoyable journey is guaranteed. Though it may not reach the same atmospheric levels as Demon Souls or Bloodborne, action RPG fans would do well to give Chronos: Before the Ashes a chance to test their killing abilities.