Fly by Day, Fly by Night

It is 1895, Austria. You are a girl, fragile and ill. Disease ridden, you fall into a deep, mysterious slumber, and when you wake, only darkness surrounds you. The world is no longer your own, and you are the savior of Light, the one who must lead the shadows astray. You are the Child of Light, the one who must restore the sun, moon and stars to the world of Lemuria. This is the premise of Ubisoft Montreal’s latest endeavor, and it is an extraordinary experience.

Child of Light is a coming of age story, and it centers around the evolution of Princess Aurora, a young girl transported to another world and asked there to be a champion for those who cannot defend themselves. The narrative’s roots are deeply connected to fairy tales, particularly the ones that are grim, yet hopeful. There’s an overarching theme of growing up, accepting fate and challenging all obstacles. Princess Aurora’s road ahead is difficult, and she must learn many lessons along the way while fighting Queen Umbra, the woman who cast Lemuria into darkness.

A lot of the narrative is told in rhyme, which is a difficult feat by itself. Those who do not have a strong background in poetry may not notice the intricacies within the writing or may even find it a tad difficult to embrace at first. However, those who are well-versed in poetry may notice that the poetic elements are not always perfectly woven within the text. During the majority of the game, this style works well in realizing the fairy tale sensibility evoked by the story. For the majority of the game, it works well as part of that fairy tale feeling the story evokes. The writing passes beyond merely solid and approaches mesmerizing, giving a strong sense of the particulars in the world Aurora is protecting. Furthermore, Aurora has a fantastic cast of supporting characters, each with their own heartbreaking and sweet story to tell. 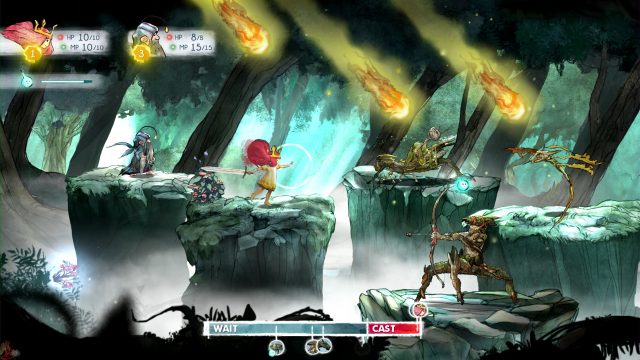 A rain of wildfire.

The narrative is also well presented in the game’s overall design and environments. Players will get the sense that the world Princess Aurora inhabits is one of doom and gloom, but for every shadow she removes with the help of her firefly companion, Igniculus, the world gets a little brighter. Aurora’s transformation in the story is what allows the world to change, and the art direction provided by Ubisoft Montreal does an amazing job of expressing this world in a manner that makes it feel alive and real. It’s incredibly easy to be swept away by the gorgeous backdrops on display everywhere, and in the way that every element of the game is intricately and effectively connected, both for story and platforming purposes. There is a huge attention to detail and visual appeal, and how it fits into the narrative makes Child of Light stand out from the crowd.

Furthermore, there is simplicity in how to navigate the world of Lemuria. Igniculus is controlled by the right thumb stick, and he can open boxes that are difficult to reach, along with healing characters within and outside of combat. Aurora’s firefly friend can also illuminate dark areas and collect wishes in order to replenish the light that is his method of doing so. Controlling Igniculus takes a bit of familiarity with the controls, but the puzzle elements are never unfair, preventing the process from becoming unpleasant. In a lot of cases, the platforming gives way to traversing difficult and elaborate areas using Aurora’s fairy wings. Flight is a huge part of the story, and it is the primary way to navigate through the world and its puzzles. The mechanics of flying in the game is seamless, and it’s a joy to move effortlessly through each of the game’s lush areas. Child of Light does not use the mechanic Brothers: A Tale of Two Sons did that forced players to control both onscreen characters, meaning Igniculus will follow Aurora without needing to hold the right thumb stick down.

Combat in Child of Light is turn-based, but with a few elements that keep it strategic and engaging. Using an active time battle system similar to Grandia, players and enemies will move across a bar from wait to cast. This bar pauses while the player selects an attack, allowing him or her the chance to collect wishes that replenish Igniculus’ light before performing a turn. Enemies that have chosen an action can be interrupted before it is carried out if the player’s side reaches the gauge’s end first, though the inverse is also true. If an enemy is ahead of the player and the player is getting ready to perform an action, choosing defend allows the player to avoid interruption, returning to the beginning of the wait section, but moving lightning quick to recast the intended action. This makes for constant back and forth, but players need to watch the action bar accordingly to make decisions about the type of action they wish to perform. Every action has a cast time, so it’s key to think about how long an action might take versus an enemy action. 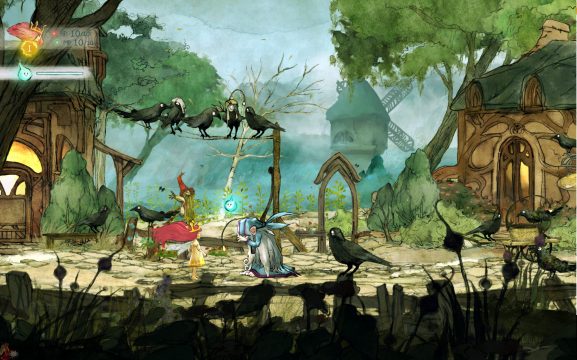 Igniculus is also used in combat, as well. Aurora’s firefly friend, when highlighted on a player character, will replenish health. Highlighted on a foe, Igniculus can delay an enemy’s action, and that is regardless of whether it is in the wait or cast section. Having Igniculus’ help allows for another layer of strategy to combat, but he can only delay one enemy at a time, meaning players will have to choose wisely if there are multiple foes on the battlefield. Encounters can be challenging in Child of Light, but never so difficult that players can’t overcome it. Plus, if party members die, another one can easily be shuffled in to replace them.

On top of the interesting interpretation of an ATB system and its gorgeous visuals to boot, Child of Light also sports a breathtaking soundtrack. Composed by Cœur de pirate, there’s a wonderful variety within the soundtrack to keep players engaged and humming along. Furthermore a lot of the music all compliment each other, making for a harmonious union in which Child of Light feels like a complete package instead of disparate parts.

Child of Light is the kind of game that played to my love of fairy tales in such a way where once it sunk its claws into me, I was invested. While it’s a short experience, clocking in at just under twelve hours, there’s a surprising amount to explore and discover. It is a game that not every player may feel connected to, but in the right person’s hands the game’s spell will weave its magic. This game plays to a variety of strengths that are hard to deny. Princess Aurora’s story may be one you’ve seen or heard before, but it’s one worth revisiting just for the world building and narrative alone. Child of Light‘s artistic appeal not only holds up, but it has the gameplay to back it up, making the world of Lemuria an unforgettable one.