Color Your World, Make It New

How often have you felt a deep, emotional connection to a video game? The story of a little dog and the rabbit she looks up to doesn’t sound like a story that would punch anyone in the feelings, and yet here is Chicory: A Colorful Tale. Chicory asks hard questions while creating a truly artistic experience for those who want to color their way through this black and white canvas, and it’s a near-flawless experience.

Players take on the role of Taco, a dog who is a janitor at the Wielder’s Tower. This magical place houses the past and present Wielders of the Paint Brush, with the rabbit Chicory currently holding the position. However, Chicory is not herself. Depressed and withdrawn, Chicory tosses the brush aside, only for it to be picked up by our heroine. Taco begins to paint around the town of Luncheon and notices that while the colors she is painting are beautiful, there is corruption coming from the brush. Journeying across all the land of Picnic, Taco must find out the source of the corruption, why Chicory has abandoned her post, and why all the color has been removed from the world.

The theme of loss and grief is very apparent throughout Chicory. The story itself, though simple in nature, provides a lot of very thoughtful and introspective moments for both the characters and the player. Taco feels moments of doubt and self-loathing, but when wielding the brush, she feels confident, impressive, and powerful. The task of coloring Picnic is both part of the revitalization process to try and remove all the black-and-white in the world, but it is also a very personal journey for an unlikely heroine. There are so many beautiful quiet moments in this game, where Taco will learn about boundaries, when it is important to take a break, and, most of all, not to be so hard on herself when she fails. In a lot of ways, the story is about an artist’s voyage, but it is ultimately a story any player can connect with; through emotional hardship comes compassion and empathy for both oneself and others. 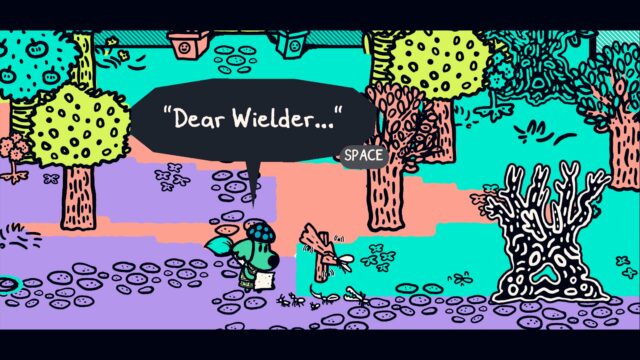 The story also manifests beautifully in the gameplay. During moments of self-doubt, players will see black ink spilled around areas of the game, or black blobs that will eat any color that appears on or near them. Depending on how Chicory or Taco is feeling, there are elements, such as the black blobs, that cause the world to transform around them, creating tons of eye-catching visual effects and events. This is especially apparent in boss battles where emotions and shadows of a character’s self manifest into frightening monsters. There are a lot of mood-enhancing visuals that play into the way the story is told, and boss battles do a fantastic job of showing how far the corruption has spread, and how Taco and Chicory are their own self-saboteurs.

The light action combat is almost a symbolic manifestation of Chicory or Taco’s psyche at play that acts as a complement to the story. Some of the boss fights are not always the best at communicating what the player needs to do, but others are crystal clear. Combat during boss battles often requires the player to paint on top of elements, such as the boss’s eyes or face, in order to do damage. If the boss has an abstract appearance, it’s hard to know where or how to damage the boss. Using a mouse and keyboard, the game’s combat controls can feel a bit stiff but this is offset by how generous the game is about failure. There are so many different accessibility options available to the player, and nearly everything in the game can be adjusted to some degree. In the case of combat, it is easy to bump up the number of hits Taco can take, and there are no game overs to punish the player.

The amount of care and thought that went into how accessible Chicory can be is apparent in its presentation. Being able to adjust the game’s difficulty, including adjusting how challenging combat and puzzles can be, makes the game feel as though it is accessible for any player of any skill level. There are even telephone booths where Taco can call home and ask her dad for more detailed advice on exactly how to find a location or get hints on how to solve a specific kind of puzzle. This feature is both charming and handy, as it allows players to take as much or as little information as they want from the phone call in order to progress on to the next task. Chicory is not interested in punishing players but instead prefers to create an experience that anyone can enjoy and be a part of, without any feeling of being excluded. 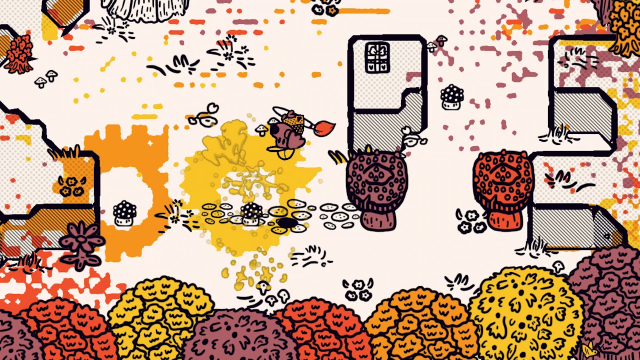 In terms of gameplay, Chicory borrows all the best elements of Zelda games to create fun and unique puzzles to solve. As players move through each corruption zone, they will gain a new brush skill that will aid Taco on her journey. Using the paintbrush, Taco can solve puzzles that may require her to push objects around and paint them to make them burst, or paint clouds to jump from platform to platform before all the color is rained out. Players can also swim through the paint to move around different areas or even climb walls. Chicory is a great example of every new power-up feeling valuable for progression.

Solving puzzles in Chicory is fun and thoughtful. While there is the odd fiddly puzzle with a timed element, such as jumping on moving platforms, at no point is the player penalized for retrying. Puzzles never feel frustrating; if anything, they strike a great balance of being both challenging and engaging. It is also amazing to watch puzzles transform the environments, such as painting plants allow them to pop open or grow; the visuals are always moving or coming to life in the background. Players can also simply take a break to paint any area they like, and bringing color to the game’s canvas is extremely relaxing, to say the least. I easily found myself painting new zones as I encountered them, simply because I loved just moving my mouse around and bringing color to the game’s canvas. Not only are environments paintable, but characters will often respond to being painted on. There are so many chill moments in Chicory, from painting logos for local businesses to performing silly sidequests wherein Taco will need to help the residents of Picnic deal with their day-to-day problems. 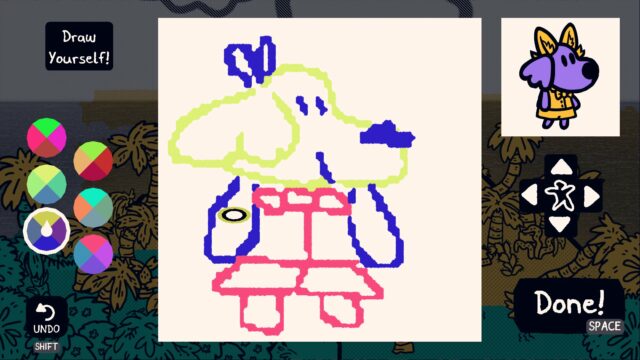 I drew Taco! Look at my artistic talent!

In addition to the wonderful imagery, which is apparent in all aspects of the game, Chicory’s soundtrack also deserves a ton of praise. The music in Chicory does an amazing job of reflecting both the visuals and what is happening in the exact moment of the story. It cohesively works with the gameplay, the story, and the designs to create memorable pieces that remind the player of what is happening on an emotional level, as well as reflecting how the world in the game is constantly changing. Even boss battle themes have an amazing build-up that bursts with emotion, making the player feel like they can take on any challenge and wipe away self-doubt. At no point do any of the tracks outstay their welcome, but continue to build alongside the story for great emotional impact throughout.

Chicory: A Colorful Tale is my near perfect game from start to finish. It is a game where every element of it feels carefully thought-out to create a meaningful and memorable experience. I love games that make me feel throughout, and Chicory is one big call-out to all those empathic individuals who constantly feel big emotions while expressing the desire to be supportive of their communities, and passionate towards making everyone feel wanted and welcomed. While not every game makes players feel wanted or welcomed, Chicory is unafraid to wear its heart on its sleeve and allow every kind of player to be a part of its experience. Despite not everything going off without a hitch, and some systems sure to appeal more to certain kinds of gamers, Chicory’s emotional core is so strong, so impactful that it eclipses all other shortcomings and just leaves the player with an overwhelming feeling of pathos. 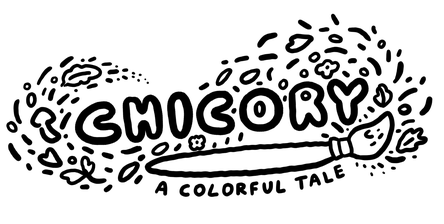