Konami’s Castlevania: Symphony of the Night is considered to this day to be one of the best action RPGs of all time. Past efforts at recreating the experience on the Gameboy Advance have met with limited success. Circle of the Moon was well received, but featured graphics not well suited to the platform. Harmony of Dissonance looked wonderful, but was severely lacking in the gameplay department. Now however, a third GBA installment, Castlevania: Aria of Sorrow, seems to finally hit the nail right on the head.

Aesthetically, Aria of Sorrow takes after Harmony of Dissonance. The graphics feature a high degree of contrast and larger sprites than earlier games. The sound unfortunately also follows suit with HoD, lacking somewhat in quality, and failing to recreate the classic tunes of the series.

The gameplay, on the other hand features more depth than any game thus far in the series. While it still maintains the Metroid style of exploration as the other GBA Castlevanias, a plethora of special abilities can be obtained as a reward for defeating the various types of monsters in the game, not unlike Capcom’s Mega Man Battle Network series. 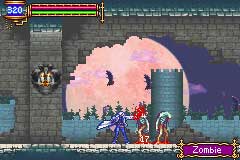 Better than the last two times you did this.

Another refreshing change of pace comes in the plot. While every other game in the long-running series regurgitates the same story as the last (Dracula has come back from the dead, explore his castle and kill him again), Aria of Sorrow tries something a bit different. While you still won’t find anyone playing the game just for the story, the new twist this game takes at least leads to cut scenes where the characters don’t just seem to be repeating the same tired lines. Strangely enough however, the much hyped change the game makes from a Victorian world to the 21st century has no noticeable impact on the visual style.

Of course, while the gameplay and story may have some new aspects, Aria of Sorrow still features essentially the same map as its predecessors. While there is something to be said for maintaining the same basic layout of Dracula’s castle over the years, the thrill of exploring the various areas is now long dead.

Overall, Aria of Sorrow is perhaps the best of the Metroid-style Castlevania games, and well worth playing. However, those who find themselves growing tired of the series should probably think about giving things a rest.