Though Square Enix was somewhat reticent to bring Silicon Studio’s take on classic JRPG gameplay westward, eventually Nintendo itself picked up the mantle to bring Bravely Default first to Europe and then North America. This proved a worthy endeavour and Nintendo readily repeated the process with its follow-up, Bravely Second: End Layer, a game that demonstrates it has learned from past success. For the majority of those taking a look, this isn’t remotely a bad thing, and the game has evidently learned from at least one key piece of feedback.

Bravely Second returns players to Luxendarc a little over two years after the events of Bravely Default, though the tale doesn’t require knowledge of the past to follow. Things start off with the new character Yew Geneolgia, bodyguard to the Crystal Orthodoxy’s new pope, Agnès Oblige, failing to prevent her kidnapping by the mysterious Kaiser Oblivion at a peace summit between the Orthodoxy and Duchy of Eternia. Yew sets off on a rescue mission and the game quickly disposes of his original companions to bring the true party together that also includes Magnolia Arch, a young woman hailing from the moon in a quest to eliminate the dangerous creatures called Ba’als; Tiz Arrior, arguably the primary hero of Bravely Default; and Edea Lee, one of Tiz’s companions from the past game and daughter of the Grand Marshal of Eternia.

Although not heavy on world-building and happy to keep events succinct, Bravely Second features a rewarding tale. Higher concepts of time and space are once again involved, but many will be thankful to learn that the extent of repetition being forced on the player is greatly lessened. Like Bravely Default, there are a lot of interesting aspects at play, and though the effectiveness varies, plenty of neat realisations more than sway the balance in the game’s favour. Yew and Magnolia are welcome additions to the main party and there are plenty of entertaining scenes among the four, particularly those that take place in Yew’s magic tent. It’s a very rewarding story for those paying attention, with the cast adding engagement from all sides in a multitude of ways. The development team has also taken note of past criticism, getting the excellent payoff to occur in a more effective manner this time around. 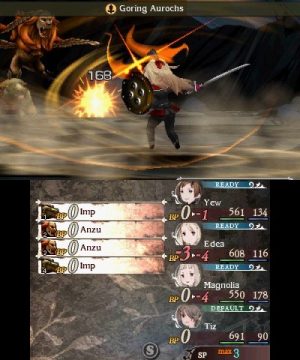 Going all out is great when it works, painful when it doesn’t.

Those who played Bravely Default will already be intimately familiar with Bravely Second‘s gameplay and combat system. Although based on a standard turn-based template, things become mixed up through the Brave and Default commands available to combatants on both sides. Using Brave makes it possible to act up to four times in a turn, though ending with negative BP can lead to them being vulnerable for upcoming turns. Default, meanwhile, is the game’s equivalent of defending, but comes with the bonus of not using the BP that other actions do.

There are various other aspects that add depth to combat, starting with the highly effective job system. In addition to a primary job, characters can also equip a sub-job to gain that occupation’s battle skills, as well as assigning five points to passive skills previously learned from any of the other classes. A few of the new options may feel a bit too specialised or complicated for some players to go all-in on, but it is still worth trying and levelling them up a bit to unlock the support skills, whose system adds a nice extra level of build customisation while encouraging players to change up jobs when new ones appear. The job system is one of Bravely Second‘s standout areas, not only in the variety between them but also in how different roles can link for some powerful combinations on a single character or tactically using the whole party. Customisable special abilities and ways for players to use attacks provided by others around the globe also make helpful marks. Combat is once more a fantastic experience in which all aspects come together superbly without ever wearing thin.

The game’s sidequests all feature the asterisk holders from Bravely Default, who have since moved onto better, or at least more neutral, things. They find themselves getting involved in various quandaries around the world for which Edea is roped into being the arbiter. The former villain that it is not sided with in each disagreement expresses his or her displeasure through a physical confrontation, allowing the user to unlock that job, with an opportunity to collect the other side’s asterisk presenting itself later in the game. While the choices are morally ambiguous, they lose some impact once it becomes apparent that there’s no way to make a negative decision (sources indicate this resulted from eliminating some repetition from the Japanese release), which puts a damper on the final character growth for Edea that these parts are clearly meant to lead up to. 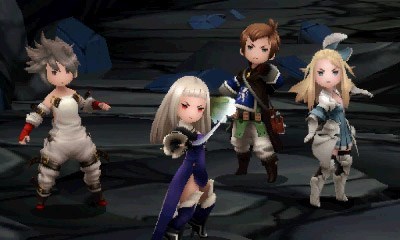 Ready to bust some Ba’als.

Dungeon design is where the Bravely games are bog-standard. While they’re not without any interest, the locations are mostly there to link battles and story, with any pathfinding and switch-based puzzles never being taxing. The game also repeats many of the places used in Bravely Default, however, the general simplicity and relatively small size of dungeons makes this particular recycling less of an issue than in other titles. Enemies at least seem fresh, and nicely varied throughout the game, each with their own weaknesses and ways of fighting. Another thing that deserves highlight is the control players get at all times over an assortment of aspects — such as difficulty, encounter rate, quest markers, etc. — to help set the level of challenge and pace they want, something other games could greatly benefit from emulating.

Bravely Second features plenty of subtle visual improvements. Characters are a bit more realistically proportioned and able to show more emotion than before. The art style works well, and its 3D implementation is certainly one of the 3DS’s better. Revo was unable to return to score the sequel’s soundtrack, his role filled by ryo of supercell fame. The difference in styles means Bravely Second‘s tracks are a bit more layered and less focused on the guitar riffs of the first title, but it’s still a great pleasure to listen to. The final boss themes in particular are stellar. The English voice-acting has its ups and downs, such as Magnolia’s inconsistent accent, but is on the whole a solid effort and a boon to the story.

Although it’s not going to win over those who struggled to get into Bravely Default from the early going, Bravely Second should hold great appeal for everyone else. Those who were turned off by the implementation of Default‘s grand ending scheme will be pleased to learn Silicon Studio has taken steps to try and avoid a repeat. For everyone else, Bravely Second provides another exciting experience for JRPG fans and many should end up hoping the series goes on further.