You Spin Me Right Round

Falcom has created a wide gamut of series over the years, but most of them are less known than Ys or The Legend of Heroes have become. Brandish is one of the relatively underexposed Falcom items, with only the first game on the SNES ever seeing a release outside of Japan. Brandish: The Dark Revenant is a remake of that first game, yet the changes it has undergone make this iteration the preferred one. Brandish is still a title of interest only for those seeking an unforgiving dungeon crawl, but by having smooth visuals instead of nausea-inducing screen tilts it’s been greatly improved.

Brandish‘s most differentiating mechanic is its method of navigation. Despite being viewed from an overhead perspective, the protagonist always faces ahead while the dungeon revolves at ninety degree angles around him. In earlier incarnations of the game this occasioned disorienting spinning every time the viewing angle was changed, but this version of the game manages to move smoothly. The controls for shifting the viewpoint are solid, leaving only a change in the player’s expectations to be overcome since this method is unlike any other dungeon crawling method. Becoming accommodated to the perspective is not nearly as demanding as the rest of the game in The Dark Revenant.

Aside from its unusual method of dungeon movement, Brandish is a recognizable version of dungeon crawling circa 1991. The protagonist traipses around over forty floors of a gigantic dungeon, picking up a variety of keys and pressing numerous types of switches to progress. Environmental hazards are constant, ranging from holes in the floor that drop the protagonist downward to rolling boulders of the sort that Indiana Jones encountered. Brandish does a good job of keeping things fresh throughout, never making the challenges encountered while ascending feel the same as what came before. Sometimes that means floors can be frustrating: two levels which demand manual inspection of every tile for traps in the darkness are particularly troublesome. An invaluable automap constantly displays the layout and most important landmarks show up on it, reducing some potential navigation hazards.

Combat is in real time, though all enemies have a simple pattern that can be observed. Swords do the job at melee range, while several forms of magic can hit from a distance. The hero can block most attacks with his shield provided the strike is made from an adjacent tile, though if enemies hit from the side or back there is no defense. Attempting to hack and slash will result in prompt death due to the power with which most enemies can hit, but using a bit of caution and exploiting the very limited movement ranges of most adversaries is a viable method of survival. Resting to recover health is usually an option, which saves on healing supplies but leaves the hero stationary and vulnerable if enemies are in the vicinity. Even bosses are susceptible to the tactic of walking out of their enclosures and resting to heal for a cheap means of victory, save for the last form of the final boss from which there is no escape. Adversaries can hit very hard to make up for their stupidity, so the ability to save anywhere is quite helpful. 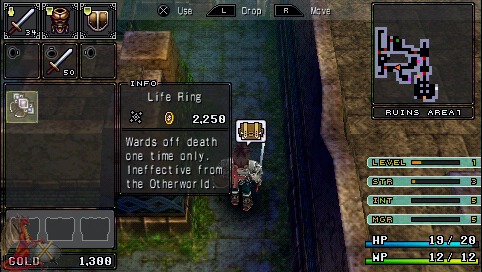 What kind of lousy life ring only works once? How disappointing!

Fiddling with Brandish‘s inventory is unfortunately a stressful task, one that can get a slow player killed. Everything takes place in real time and the game does not pause for inventory management, which is fine most of the time once the player remembers not to take needless chances. Limited inventory slots become aggravating when the game makes the player manually stack like things such as healing potions and iron balls that identify holes in the floor. Weapons are breakable, and once broken the game leaves the nearly worthless piece of shattered metal in the inventory. Paying attention to treasure pickups is critical, for sometimes identical-looking and similarly-described poisons are obtained instead of healing items. Interacting with the occasional shopkeeper inhabiting the dungeon is thankfully efficient, but the inability to combine weapons into one pile to save space is irksome.

Save for the last phase of the final boss, walking away from struggles with bosses to heal and save is always a possibility, which is a good means of mitigating their great power. The lousy AI of enemies does not make this an easy game when death is always lurking from one moment of inattention, but Brandish is reasonably fair in its methods. Levelling is not the solution to most issues, as it simply increases HP and MP: only through use do the statistics increase for physical and magical damage potential, as well as magic resistance. Several of the puzzles are surprisingly difficult even with plaques in the dungeon to give guidance, due to the vagueness of hints provided. By the standards of dungeon crawlers of its time Brandish is reasonably forgiving, but should not be undertaken by any with an aversion to learning through repeated disaster how to progress.

Even by the standards of its 1991 origin, Brandish‘s narrative is slim, though this does not distinguish it from many other dungeon crawlers. Ares and Dela have fallen from the surface down a deep chasm, and only by traversing the many levels of dungeon in the way can they escape. Dela is after Ares for the pre-game killing of her master, though her appearances are more for comedy than serious depictions of an antagonist. Long stretches of the game will pass without any narrative whatsoever, and the knowledge that the entire dungeon was created because a power-mad ruler became cursed forevermore is not expanded upon. What narrative does appear is intriguing enough to be worthwhile, just so long as the player knows that a much greater portion of time will be spent exploring the dungeon. 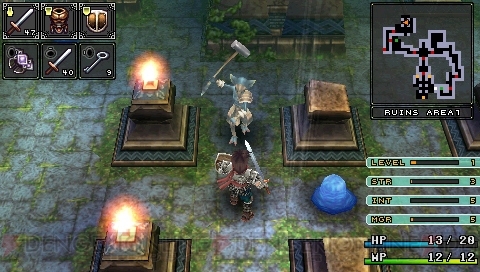 Inhibited by his possession of only two hands, our hero cannot simultaneously defend against both foes!

Falcom games usually come with strong soundtracks, and Brandish does not disappoint — it even has an 8-bit rendition of the music from an earlier version of the game as an option. Quantity is the one caveat, as most tracks continuously play for many floors and the total number of compositions is not large. As for the visuals, polygons are evident when looking at most things. Each area of the dungeon has a unique look and a remarkable lack of palette swapping is found in the enemy rogues gallery to counterbalance the jagged edges.

My time with Brandish on the Super Nintendo was limited due to the unpleasantness of the viewpoint changes, but this rendition fixes that problem. It even adds extra levels after completing the game for play using Dela, and is thus the preferred means of experiencing this title. While hardly the greatest dungeon crawler ever produced, exploring this labyrinth is worthwhile for a certain audience. Falcom has plenty of other series that have gone without new iterations for many years, though the length of time since Brandish was remade seems to indicate that it unfortunately didn’t start a trend.