It’s with a bit of heavy heart that I write this Bound by Flame review. After seeing some encouraging progress made by Spiders in Mars: War Logs, hopes were high that the trend would continue and result in a game that, while unlikely to be spectacular, would at least provide a solid experience. Unfortunately, except for a bit of polish, things are stagnated at best, and coupled with a considerably less engaging story and world than the previous effort, it’s hard to come away as anything but disappointed.

While Mars: War Logs‘ story wasn’t anything particularly great, it worked pretty well thanks to a tight, local focus. Here, Spiders has eschewed that in favour of a more ambitious quest to save the entire world. Players take control of a character they can choose the name and gender of, plus a very limited set of appearance options, although they will always be called “Vulcan” in conversations. Vulcan is a member of a mercenary group in the land of Vertiel, currently tasked with protecting an order of mages called the Red Scribes. Vertiel is currently at the mercy of the Ice Lords, powerful necromancers whose magic and undead armies have laid a frozen waste to much of the land. In a desperate attempt to fight back the Red Scribes attempt a ritual to gain power, which goes awry and leaves Vulcan as host to a powerful flame demon, augmenting his abilities but leaving him under its influence and the possibility of a hostile takeover.

Unfortunately, Bound by Flame‘s story is woefully ill-equipped for the task. Things start off alright in the early act set around a small forest village, but things soon fall apart. Far too many key events seem to happen entirely off camera with only a short bit of exposition later to reveal they occurred, and the game never feels like it’s telling such a key journey with a cast and extras that struggle to reach a double-figure concurrent total at any point. The story does have some parts where choice has a significant impact, and some where the choice is rendered irrelevant almost immediately. While it’s admirable to try and let players affect the storyline with their actions, one can’t help but think that a more linear focus would create a much more engaging tale rather than the gap-filled tangle that’s on display here. There are potential romance partners, but the romance scenes are so brief with little effort required that there’s almost no point to their inclusion. 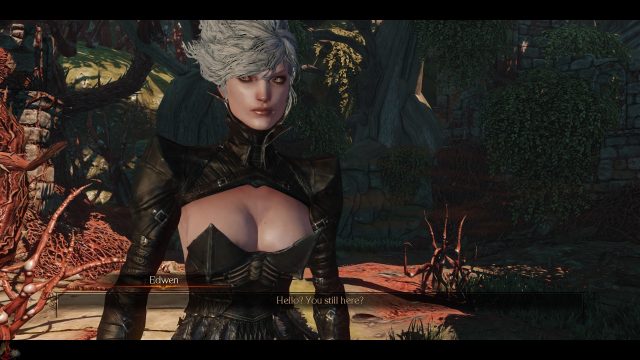 Experienced RPGamers will not be surprised to find her lacking slightly in the pants department too.

The combat will be very familiar to players of Spiders’ previous efforts, being fairly standard action-RPG fare. It isn’t a straightforward hack ‘n’ slash system though. Players need to time their guards, dodges, and attacks carefully to ensure they aren’t quickly overwhelmed. It is a slight improvement over Spiders’ previous entries by giving enemies more variety in terms of attack types and skills. The flip side of this, however, is that dealing with multiple enemies can quickly become very annoying, especially on the higher difficulties, and getting swamped is more than likely. The AI companions, of which one can be brought along for most of the game, sometimes do an adequate job of attracting unwanted attention for a bit, but other than that seem to have little effect on the outcome of battle.

To assist with combating foes, Vulcan has three skill trees to improve at level up, one each for heavy weapons, dual-wielded daggers, and flame magic. There’s nothing new here, all the trees are pretty straightforward and there’s no surprises in the upgrades contained. There are also a series of perks to unlock providing bonuses such as more items to be found off fallen enemies, most with pre-requisites along the lines of crafting a certain number of items or setting enough enemies on fire. Again nothing new, but the option is appreciated. The gameplay just about holds up for the fifteen hours it takes to complete the game, even with going through all the various sidequests on offer. 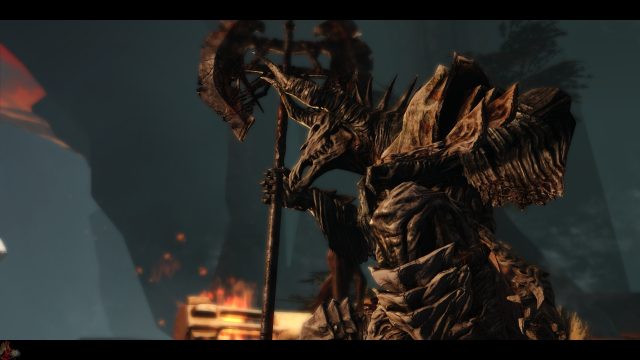 If you can guess all the animal inspirations behind this guy, he’ll pay you a visit, yay!

Crafting and equipment is at least one area Spiders has done a decent job with in the past few games. It’s not the most extensive out there, but it has a good balance for the game’s length and a simple UI makes things easy. The encouragement towards players producing their own potions, traps, and materials from those items found rather than just handing players a bunch of gold to go splurge at the next shop works well and does feel more convenient than traipsing back to a vendor. There are a lot of weapons to get hold of, and although players may find the stats between them all a bit too comparable to warrant much excitement at finding a new one, the upgrade-slash-attachment system for them is pretty interesting and offers a decent touch of customisation.

On the looks front, Bound by Flame is acceptable but generally uninspired. Locations are all rather generic, and while effort has at least been made to create some unique enemies for the game, some of the more standard numerous opponents become a bit tiresome. The lighting balance also seems a bit off with some places rather brighter than they really need to be. The PS4’s versions detail and textures aren’t much of a step up from those seen in mid-tier PS3 entries but the game at least runs very smoothly on Sony’s new console. The audio is one of the few bright spots, however. Soundtrack duties are very ably handled by Olivier Derivière, creating an engaging atmosphere in all of the locations and changing up nicely for various battle sequences. Voice acting is a bit variable with a couple of dud performances, but for the most part is of a very good quality, especially considering the story. There are still a few complaints, for example, a repeating chime that kicks in whenever treasure is nearby, though very useful, can get annoying.

It’s difficult to justify players paying full new game price for Bound by Flame, particularly for the premium cost PS4 version. Ultimately, the game has an interesting premise and selling points that on the face of things are worthy of attention, but the scope aimed for is such that the resources and timescales devoted to it sadly had no hope in achieving.