Here’s one to scratch off my backlog. Bouken-Ou Beet: Vandel vs. Busters has been sitting on my shelf so long that I forget when I actually bought it. I’ve changed addresses at least twice since then, so it’s been a while. Beet was a popular shonen manga series when the DS was the hot new gaming system, circa 2005, and this game counts as one of the earliest RPGs for it. Was it worth waiting for? The short answer is “No.”

This game functions as a side-story to the manga plot, though it really does nothing to explain its connections or its background material. Instead it takes place on a new part of the map, the Gemini Isles. These twinned landmasses share many features between them, but none so striking as the statues of the great Goddess, or as mysterious as the Ring Monuments found in every region. That is, until a warlord of the marauding Vandel forces arrives on the western island. This devil made flesh destroys the statue of the west, and then goes on to conquer the entire island. By the time the player protagonist arrives home after years of training abroad, most of the Gemini Isles’ eighteen Ring Monuments have been corrupted, changing them from silver to gold. The Vandel lord is using their power to fuel the construction of his own golden palace.

For an interesting change of pace, the player can also choose to play the role of a young Vandel warrior, whose mission is to corrupt the Ring Monuments and bring the isles under the control of his master. The game allows one save file for each storyline, so if the player really wants to, it won’t cost him or her the main save. Unfortunately, the story is a disjointed snoozefest either way, with little done to connect the plot points or to let the player know what to do next. It’s very easy to trip flags in the programming which activate the next stage of difficulty, regardless of if the main character’s ready for it. In some cases, there’s no way anyone could be ready for it.

Busters and Vandels have completely different means of advancement, though both will gain stats at the end of battle (Vandels at a much slower rate). For the human Busters, levels are gained only at the guild office in town. There, after the master assesses their experiences in the field, they receive recognition and remuneration for their monster-busting efforts, plus access to an endless supply of repetitive fetch-quests. Levels have little to do with stats; instead, they determine the quality of equipment a character can wield. Devilish Vandels don’t bother with levels at all, instead bearing a rank of one to eight stars depending on their achievements in the never-ending war against the human pests. The main way for Vandels to augment their stats is by absorbing vassal monsters into one of six body parts: the arms, the legs, the head, or the chest. These gains are not additive; each monster absorbed replaces the previous one in that slot, with a corresponding increase or decrease of a particular stat as well as the loss of whatever special skill the departing monster may have carried. Once absorbed, there is no way to tell which skill a monster imparts, so it’s up to the player to try and keep it straight. 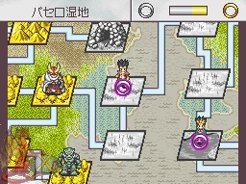 Scenes from a turf war.

The islands are divided into about forty sections that are organized into regions by terrain. A Ring Monument determines who controls the two to five sections within a region, and much of the game for either scenario is spent fending off intruders from the opposing faction and corrupting/cleansing monuments. Allied Vandels or plot-important Busters can be leaders of secondary parties, which the player can direct to spots on the map to defend certain routes.

Combat looks like something inspired by the first Star Ocean or one of the Tales games with free running mechanics. Battles take place on the terrain where they’re triggered, and the party members must run around to hit things. Only the leader of the party is under the player’s direct control, though there are AI settings to mess with if necessary. Most fights on the Buster side can be easily won by mobbing the monsters until dead, though early on it can be really difficult when allies are thin on the ground.

The Vandel side has a much steeper difficulty curve for various reasons. First, Vandels do not gain stats as readily, and the absorption mechanic that should be compensating for this sucks. Second, they generally rely on recruited monsters for allies, and those don’t gain stats or recover hit points at the end of battle. Third, the Vandel protagonist gets access to the opposite island much sooner than the Buster protagonist (who instead has to cool his jets for forever and a day), and Vandel stat gains are too slow to keep up with the massive difficulty spikes. The game’s regions are not that spacious, and the grind gets boring very quickly. Finally, after a certain number of Ring Monuments are corrupted, the opponent Buster side sends out a group with maxed out stats to crush everything in its path like the mythic juggernaut. 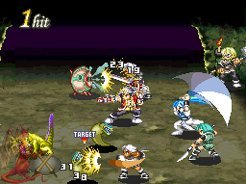 There are two sure signs that a game’s from the early days of the DS. The first takes the form of advertising on the box, where it proclaims that it has a bonus backwards compatibility deal going on with its immediate predecessor on the GBA. The other is the control setup. While Beet thankfully uses the D-pad for combat, most but not all menus require the use of the stylus. This interface is just as clunky and unwieldy as one might imagine. Moreover, there are some very important functions hidden in those menus that are left unexplained — things like how to set up secondary parties to patrol the map — but which are vital in the latter half of the game.

For such an early DS title, the graphics aren’t too bad. There’s no 3D modeling at all, and the sprites do their job well enough. The map sections are boxy spaces with scenery arranged like an elementary school diorama, but this actually works in its favor, strange as it sounds. It has something of a 3D depth to it — more so than some 3DS games — because of the layering effects. The sprites and portrait art all conform to the standards of the manga, which isn’t half bad at all, and these things help impart a feeling of character to even the randomly-named Buster recruits, even as the game provides almost no support for it in the narrative.

The sound is everything one would expect, unfortunately. The music tends to be pretty forgettable, and the only auditory item worthy of mention is the typewriter noise that accompanies dialog text. It’s just that damn annoying. While it can be turned off, this also removes all sounds effects from battle. The only real fix is to turn the text speed to max, and compress the noise into one short burst.

Obviously this isn’t a game to recommend to anyone but the most diehard fans of the original manga series. Between the poor in-game explanations and the NPCs who give important directions exactly once before returning to the normal filler text, it’s a pretty tough nut for an import as well. There’s an impressive lack of FAQs for it in Japanese, which is rare in and of itself. In short, let this one pass you by. If you really like Bouken-Ou Beet that much, then read the manga again. It would certainly be more satisfying.