The story behind the making of Black Sigil: Blade of the Exiled is a reasonably interesting one. Canadian developer Studio Archcraft had such an affection for the RPGs of yesteryear that it set out to create a game which could easily have come from the mid-1990s on the Super Nintendo. This was never a project with an enormous budget, and it took years to finish, only to run into repeated problems regarding the manufacture and distribution of physical copies. The finished game’s nods to Chrono Trigger and Final Fantasy VI are many, and will be apparent to anyone who has played those titles. Black Sigil‘s attempt to do something different with its combat is the factor that, unfortunately, pushes the game down from the heights it attempts to occupy.

Black Sigil‘s story is not profoundly original, but being well-told and interesting throughout makes up for that. Kairu is an excellent swordsman but lacks any magical ability, which is an enormous detriment in the land of Bel Lenora. Years before, a magic-less general named Vai led a great war against its inhabitants, and the people still associate any lack of aptitude with magic as being a quality of their old enemy. Kairu’s adoptive father Duke Averay feels for Kairu’s situation, and determines that only through extreme pressure can this magic-less young man ever stop being a pariah. Thus Kairu is exiled to the same place Vai went, accompanied only by Averay’s daughter Aurora, to learn magic or never come back. Kairu’s magic-less status turns out to be just what a mysterious entity wants, however, and he and Aurora wind up in a world the inverse of Bel Lenora.

In exploring their world, the characters of Black Sigil encounter random battles – quite a few random battles. Characters who fight together for a while will learn combo attacks that are very powerful and useful. The SP used for either single or combination attacks regenerates slowly while wandering around areas with enemies, but not in areas free of random battles. The high encounter rate may intermittently prompt players to try running away from combat, which is a problem because running is only accomplished by holding the B button for about ten seconds, during which time enemies will each have the opportunity to attack. The game is moderately challenging most of the time, but it is always possible that an enemy will use that interval before the run procedure is complete to inflict devastating damage. The overall difficulty of the game goes up a notch thanks to the incessant combat and the need to deal with its results even if one does not wish to kill this group of enemies. 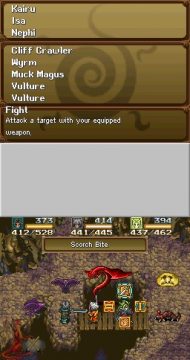 Surrounded by enemies and unable to attack anything but the ones next to them – get used to this scenario.

Black Sigil attempts a pseudo-tactical format for its combat, with most characters needing to be next to enemies in order to strike them. The problem with this setup is that the player has no say in the formation of characters when a random battle strikes, and in confining landscapes (which make up the majority of the dungeons in the game) characters will be unable to move past the dual roadblocks of the environment and their comrades to do anything except use magic. Some magical techniques are also contingent upon being close to the enemy, however.

Status ailments play a big role in Black Sigil‘s combat, but figuring out what enemies or allies are afflicted with at any one time can be challenging. Most of the time, a status ailment will be marked on the upper screen with an icon. Sometimes the game doesn’t register that an ailment is present, however, and the player will be left trying to figure out what is going on. This is particularly common if several ailments are in place simultaneously.

Later in the game more than three characters will be part of the team, but Black Sigil does not allow characters to be switched out of the active combat force unless it is done at a save point (which are not common). These characters can still use their magic to heal, but they cannot join in the combat, and it is very likely that constant expenditure of healing supplies will be necessary thanks to the lengthy dungeons and high random encounter rate.

Item usage is irritating in this game thanks to the need to equip items to a character prior to use in battle. This is constantly problematic because the game will remove the equipped items from every character at certain plot points. This forces the player to go through the process of selecting items for every character again, and making tough choices because each type of item can only be assigned to one character.

Aside from that irritation regarding item usage, the inventory system is adequate. Equipment does not display every statistic change prior to being purchased in a shop, but who can use the item along with its key effect (attack or defense alteration) is shown. One odd point that will require a little adjustment is the lack of confirmation in purchasing from stores. If the player selects an item to buy, it is instantly purchased with no further ado.

Around twenty-five hours is probably enough to complete Black Sigil. That would be giving the game short shrift, however, because copious additional content is present to stretch the playing time out massively. Extra dungeons, two optional characters, special plot events, and secrets are littered throughout the game. Forty to fifty hours is a more reasonable estimate of the time necessary to complete the game if seeing this material is desired. 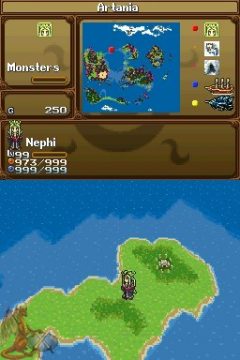 In the visuals, it is immediately apparent where Black Sigil‘s inspiration came from. Unmistakable nods to Final Fantasy VI and Chrono Trigger are everywhere. Two things hold the visuals back: the first being that since Black Sigil is striving to recreate the Super Nintendo’s apex, the Nintendo DS is not being pushed in the slightest. The other issue visually is the predominantly dark color palette used, which can make navigation a bit irksome.

The music by Jan Morgenstern manages to sound quite pleasant and is entertaining most of the time. What keeps it from rising too far is that, for a game of Black Sigil‘s size, the recycling of compositions is undeniable. Most of the tracks sound quite good, but they are heard too often.

A final unfortunate aspect of Black Sigil is its glitches. Players are strongly advised to set the text to its fastest display rate, or the game will most likely freeze. This seems to be the best insurance against crushing disappointment. It is not a cure-all, unfortunately, as an entire technique is rendered unusable thanks to a bug.

Black Sigil‘s unpleasant combat is truly a shame, because just about everything else in the game successfully emulates the feeling of playing a great lost Super Nintendo RPG. Looking past the multifaceted frustrations of this game’s combat system and occasional glitches to partake of the enjoyable parts is no easy feat, but doing so is vital in order to derive enjoyment from the game’s entertaining script and locations. Studio Archcraft clearly has the ability to create a great traditional RPG in the style of Squaresoft’s renowned output from the Super Nintendo’s later years. Black Sigil is, sadly, not that game.