In the age of roguelike deckbuilders, the modest Black Book immediately sets itself apart by being a story-driven title. Rather than a condensed experience designed to make players go from zero to hero in about an hour, it’s a lengthy story that weaves drama and characters with a driving force moving the player to a specified endpoint that can be altered by decisions made throughout. While the game is far from being novel, Black Book finds its unique voice in its devotion to 19th century Russian folklore and its rustic aesthetic.

Tucked away in an isolated corner of the Russian countryside, Vasilisa is a would-be witch who turns her back on her craft in order to marry her beloved. But before the wedding can take place, her fiancé dies under mysterious circumstances. Heartbroken, Vasilisa resumes her witch training, seeking an artifact known as the Black Book. The Black Book is said to grant the wish of anyone who can break all seven seals. After quickly obtaining the book, she sets up shop as the local Koldun — a Knower or sorcerer — and sets about helping the local populace all while continuing her training and searching for the means to break the seals. The story isn’t overly ambitious, but it does take players to more interesting places than the game’s humble presentation lets on. The characters and the folklore of the setting are the real stars here, and their inclusion makes for the most compelling reason to see what’s next. 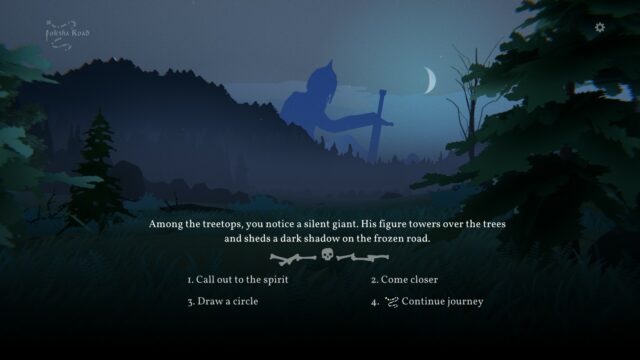 Vasilisa will often be given several prompts that result in different outcomes.

Black Book splits its time evenly between being a visual novel/adventure game and turn-based RPG. The game is split up into days, each with a different map for Vasilisa to traverse. Each map is a series of nodes that must be traveled in a specific order to reach an endpoint, though there are slight branching paths. Each node presents a scene, whether it be new information, stories to learn, vendors to visit, or battles. As far as exploration goes, there isn’t much there. Optional tasks are available and there’s no reason not to do everything on every map. The game never becomes difficult enough to feel as though Vasilisa runs the risk of failure. Additionally, not visiting every location can deprive the player of not only resources but more interesting tidbits of folklore that could legitimately help later on.

While many games are content with dumping an encyclopedia’s worth of optional lore on the player, Black Book expects the player to read its stories and makes it worthwhile. To aid her development at a witch, Vasilisa takes notes of the folklore she hears from the local populace and spirits she encounters. Much of this knowledge can be utilized by the player when prompted to answer a question. In a wise move by the developers, very few of these questions block progression, instead they are often used to provide bonus experience or to side-step a combat encounter. Very few of the entries flat out give the answer to the prompts, instead asking the player to infer the correct answer from the information they have. The game gives just enough room to make players feel as though they’ve both learned something and gotten to apply it, which feels great. There is even a hint system that cuts the experience reward in half but helps eliminate certain options. It certainly helps that the short stories to unlock are some of the best written things in the game. The game eventually runs into the issue of having a lot of entries that are organized haphazardly, so some better indexing would have been desirable. 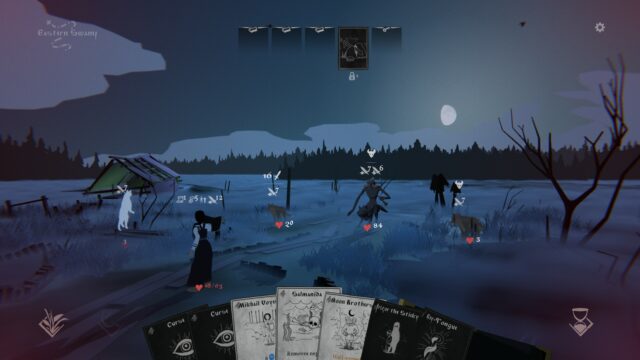 Much of the combat pits Vasilisa against bothersome spirits, though wild animals and people can get involved.

When not in dialogue scenes, most of Black Book is spent in combat. Combat is a turn-based affair, with Vasilisa casting a zargovar — spell — comprised of pages from the Black Book each turn. These pages make up the cards in the deck, split between black and white pages that can come as either Words or Keys. At the beginning of the game a zargovar consists of two Words and one Key, with these number increasing as Vasilisa levels up. Many cards have effects that will be familiar to those who have played modern card games — such as direct damage, a shield, or statuses that deal damage each turn — but as seals are broken and new cards are unlocked some interesting twists enter the formula. In particular, the way the player is able to layer buffs and debuffs has a compounding effect. For example, Waste applies damage every turn and decreases that number by one every turn. By comparison, Decomposure increases waste every turn by its value and then decreases by one. While this is very satisfying to pull off, it gets overpowered towards the end and combat can get stale as the player’s powers overwhelm enemies.

There are attempts made to shake up the combat. The first are puzzle battles, which give the player a set hand of cards and a turn limit in which to defeat the given enemies. The difficulty of these is all over the place; some are fairly simple to get on the first attempt, others are more complex. They do provide an opportunity to teach the player some of the intricacies of the combat system but often they just devolve into trial and error. At some points, Vasilisa will run into other Koldun with whom she can have duels. The twist on the battles here is that the whoever casts the shorter zargovar will go first in the turn order, unlike normal battles where Vasilisa always goes first. These battles are much more interesting, as they require the player to rethink their strategies and become more particular about the timing of their attacks. It’s no surprise that these were some of the tougher fights in the game and most game overs came during duels. 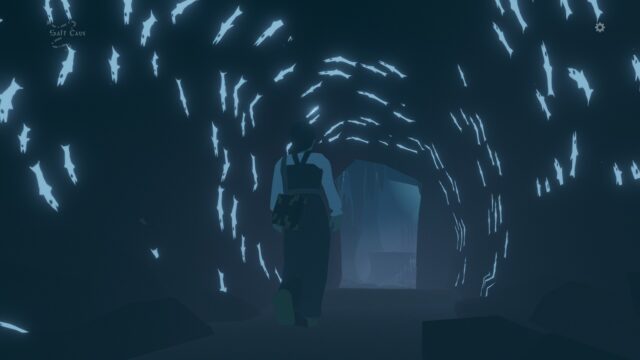 It would be convenient to just click on the doorway to move there but, annoyingly, the floor is the only place the game recognizes.

As for the game’s presentation, it makes good use of its lower fidelity graphical style. The music in the game is solid, with it’s use of folk songs giving it a strong atmosphere. The 2D models and the 3D models share a cohesive art style, one that’s rather distinctive. The 3D environments also share the game’s smooth aesthetic, though it stumbles in these due to some really bad controls. During major events in the game, players can directly control Vasilisa through point-and-click movement, but the camera stays level with the character, making it awkward to direct her where she needs to go. She also has a tendency to get caught on things in the environment. There’s even an ill-conceived stealth section near the end that resulted in several game overs merely from poor movement controls. These moments are few and far between, and with the exception of the stealth section near the end, none of them get in the way of progress, but they stand out as really rough. Some of the card text could use greater clarification, but this also isn’t a major issue.

On the whole, Black Book is a fun adventure that does enough to stand out from the crowd. The combat and card play are different enough from its contemporaries that those looking for a more traditional entry point into deck-building can give it a shot, even if the game begins to wear out its welcome by the end of its thirty or so hours. The real reason to stick with it is the great attention to detail regarding Slavic folklore and how it weaves into the gameplay in ways that can make the player feel clever. It won’t be the flashiest game anyone plays this year, but there is a good time to be had.