Pissing Here, There, and Everywhere!

When Biomutant was announced, it vowed to be an experience like no other. Players who love wuxia and kung fu have been dying for a game in the genre that could compare to the BioWare classic, Jade Empire. Boasting deep branching narratives, unique kung fu and gun-fu combat, and a massive world to explore, the game should have been a grand slam. Disappointingly, Biomutant doesn’t reach its lofty ambitions and fails to be engaging.

Taking on the role of a mutated rodent-like creature, players begin in an old bunker and work through the game’s tutorial. The player character saves Out-of-Date, an elderly creature who explains that the Tree of Life is dying. A poisonous oil leak at the deep roots of the Tree is starting to surface on land, polluting the world. Meawnhile, each of the five roots that are meant to protect the Tree are being attacked by large creatures known as the World Eaters. The World Eaters are gnawing at the Tree’s roots, destroying the world’s balance. The tribes are fighting amongst themselves, disagreeing with how to fight off the World Eaters. Out-of-Date says the player is the Chosen One, and asks that they unite the divided tribes, and banish the World Eaters for good.

Climate change is an interesting topic in video games, and it is very much at the forefront of Biomutant’s story. This idea of restoring balance to the Tree of Life and cleansing the world is a key theme throughout. The World Eaters are such interesting creatures, offering players unique and challenging combat experiences as well, from underwater battles to mounted warfare. The boss battles with the World Eaters will have players using mounted combat, underwater rigs, and other uncommon elements filled from the main quests to defeat them. They are beastly creatures with unique challenges and are easily a highlight both in their presence in the story and in terms of gameplay. It’s a shame that besides their existence the rest of the main story is barebones, mostly just exposition set pieces where it’s going to point A to help someone, and then to point B, and so forth.

Another positive that exists is the game’s narrator, voiced by David Shaw Parker, who helps ease players into the story with often cheeky dialogue. The narrator is helpful as he speaks for all the creatures in the game, telling their story and making it feel very accessible. Players can also adjust how much or often the narrator is speaking to them, which is a cool feature. The sound design in Biomutant is well done, as the music is very subtle and unobtrusive, and the creatures’ voices are pleasing rather than irritating to the ears. Sadly, the positives end here, as the game’s ambitions start to undermine its own ideas. 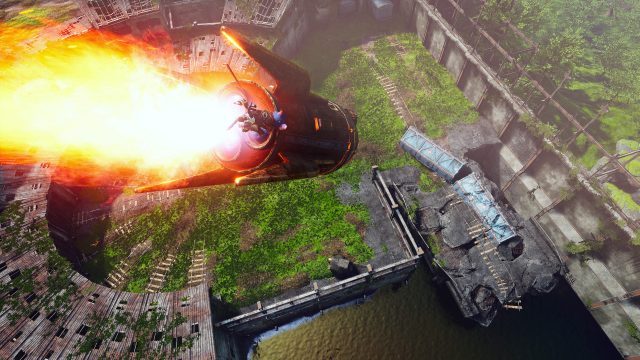 Help me, I’m trapped on a rocket to nowhere!

Morality is a key component in Biomutant’s narrative, focusing on choices that embody Darkness and Light. However, those expecting a deep morality system, like that of an Obsidian or BioWare game, will be sorely disappointed. A player’s decision should ultimately alter the world around them, but Biomutant’s world stays the same no matter what choices are made. There are no consequences to the players’ decisions, which do not affect the storytelling in any meaningful way, creating a very stagnant experience that struggles to keep players invested. The only noticeable element that the morality system provides is based on alignment which perks and skills the player character can possess.

The world of Biomutant is beautiful from a graphical standpoint, but it is hollow and lacks personality. Much of the side content feels bloated, offering mostly fetch quests or rotation puzzles that all use the same gimmick. Finding old-world technology and repeating the same puzzle mechanics to unlock an item gets stale quickly. There is no soul or personality in either the main storyline or the side content, which is infuriating given how gorgeous the world looks and how interesting the character designs are. Biomutant‘s character designs have a unique on-screen presence, popping with personality, yet they inhabit a space devoid of driving action or drama because the main narrative isn’t compelling. Characters are not memorable because they blur together as blobs of generic personality traits. While recruiting characters is important to the finale, no individual character stands out, and each of them is interchangeable, giving players no reason to care. Meeting characters in Biomutant provides mere exposition and lacks a progressive story arc for players to engage with.

Biomutant continues to miss the mark in its combat as well. One of the most promising elements of the game is the ability to use wung-fu and gun-fu. At the beginning of the game, players can choose from two starting classes, though they sadly lack distinction since both can use either wung-fu or guns. As players learn new gun-fu or wung-fu, they will learn new button combos to input during battles. Players must master dodging, though the hit detection in battles is often questionable. Players can also use ki energy to perform special abilities obtained by spending Psi Points they acquire from shrines scattered around the world. Battles lack the fluidity that one would expect when imitating kung-fu, and the stiffness makes combat clunky and slow. As the player levels up, there are plenty of skills to learn which allow for combat variety, but battles remain unengaging due to the stifling mechanics. 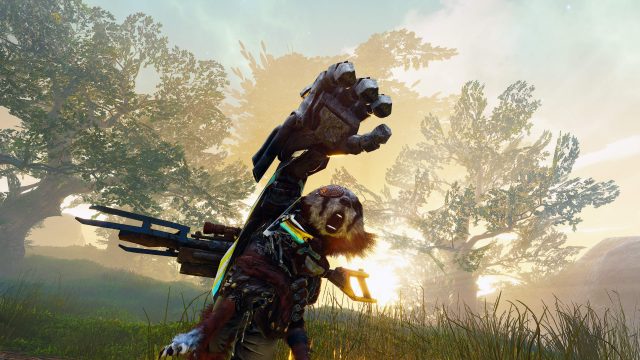 Klonkfist is magic. No, really!

These weaknesses are exacerbated by technical issues that plague Biomutant throughout the journey. From slowdown in and out of combat to hard crashes, the game never feels truly stable. It is noticeable that the game is not optimized properly on PlayStation 4, as the hard drive tends to grind in areas. Though there have been patches to alleviate some of these pains, most of the slowdown and crashes, unfortunately, remain throughout. Saving frequently is a must as the game is quite unpredictable. When quick-time events occur in the game, it is also difficult to see which button should be pressed, as the icons are quite tiny. The game’s accessibility would benefit by making icons larger. Finally, Biomutant is also beset by horrifically long load times, which add to its already lengthy list of technical shortcomings.

Despite some interesting ideas, Biomutant commits the cardinal sin of media — it’s boring, and that ultimately seals its fate. The game has a gorgeous world and adorable character designs, yet it’s soulless and falls far short of its ambitions. What makes it even more depressing is that, although it has potential, it’s plagued by too many poor gameplay elements plus a story that’s bloated with exposition and undermined by poor character development, as well as the rampant technical issues. Offering a main story that can easily be completed in less than fifteen hours, Biomutant is a quick experience but the dullness still comes in that short amount of time. Ambition is a beautiful thing to have, but if you cannot fulfill it, it’s nothing but wasted potential and time.