Limited Run Games revealed that its physical editions of Wizard of Legend will be available to pre-order on its website from this Friday, June 12, 2020. The editions will be available for PlayStation 4 and Nintendo Switch, with the pre-order period running for 30 days.

Wizard of Legend is an action roguelike and was released for PC, Mac, Linux, PlayStation 4, Xbox One, and Nintendo Switch in 2018. The game takes place in the Kingdom of Lanova, where every year the Council of Magic holds a contest for its strongest members called the Chaos Trials, with those who emerge victorious going down in legend. 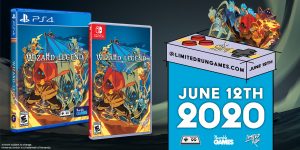