Beyond the Labyrinth Import Review

Beyond the Fourth Wall

Imagine that you’re playing a game, a sort of online multi-player dungeon crawl, with three people randomly assigned to your party by the game server. It’s simple enough, with pseudo-8-bit graphics and not much else going for it. Then, out of the ether, there comes a voice: “Help me. Somebody, please…” This is definitely not part of the game, but that doesn’t matter because soon enough the game itself ceases to be just an amusement. In a burst of static, everything changes. 8-bit graphics are replaced by vibrant 3D backgrounds, and the owner of that mysterious voice is tapping on the main screen of your 3DS, asking if you can see her. Welcome to Labyrinth no Kanata, also known in English as Beyond the Labyrinth.

The story is simple enough. The girl, who never does remember to introduce herself properly, has fallen into the heart of an impossibly deep valley filled with intriguing architecture and dangerous monsters. The four players have been summoned by magic to get her out of there. It’s never exactly clear what form the players’ interface with the world takes, but the girl can definitely see through the screen to make comments on what a wondrous place everyone else lives in. Unfortunately, there’s a definite communications problem. While the girl is happy to talk and talk and talk all day about her hopes and dreams, she cannot see the text messages that the “online” party members send one another. These text messages are good reading practice, as they cover everything from in-game mechanics to cheeky commentary, meta-gaming, and last night’s dinner. There’s a helpful chat log that holds the most recent conversations, but the girl’s part, while fully voiced, lacks subtitles. A decent listening level in Japanese is a must if one is to get the most out of the story.

While its basic synopsis can only be termed as “simplistic”, this game delivers an impressively emotional payload at the end, and it all comes down to presentation. The girl’s 3D modeling rivals that of some PS3 titles, with clear body language and facial expressions that really show her personality well, providing a good complement to the excellent voice acting. The in-game players’ dialogue isn’t restricted to big scenes, but instead becomes a regular background element to the dungeon crawl. It’s possible to watch these four strangers from the internet bond through perfectly ordinary chit-chat and a shared concern for the bumbling young lady they are accompanying. The combination of this mundane conversation, the girl’s frequent one-sided conversations with the players, and the increasingly fantastical backdrop of the labyrinth comes together to create a surprisingly effective vehicle for the story.

The initial 8-bit experience stands as a basic tutorial for how combat works within the “real” battles to come. At its heart is a glorified game of rock-paper-scissors played with colors, though the reality is that it goes a lot deeper than that. Party members and monsters alike have color attributes which determine whether an attack’s power is reduced or strengthened: red beats green; green beats blue; blue beats red. If a hit is made to a color’s weakness, the damage is tallied in the upper-right corner of the main screen. The next one to use that color, friend or foe, absorbs those hit points, so it often pays to choose targets in ways that ensure the monster won’t get it all back the next turn. The clearly marked turn order in the lower screen helps a lot there. Beyond the basics, it’s possible to increase or decrease the strength of an attack with the cursor buttons, which in turn alters the amount of charge time before the next attack. 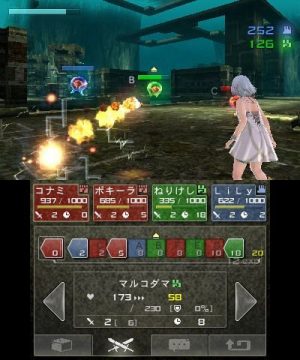 Ghosts in the maze

Things get more interesting as the girl gains magic of her own. In the labyrinth’s second zone she receives the ability to stock energy, multiplied or added to via damage dealt by the players. Whenever her turn comes around, she blasts an enemy with everything she’s got, multiplied by her health percentage. The closer she is to full, the more damage she does, and her maximum capacity increases every time she uses this power. By the final boss battle, she can potentially do sixteen or seventeen thousand points of colorless damage, if the players can keep her safe and healthy.

The second magic, and by far the most strategically versatile thing in the game, is the shield ability. With this, individual players can be removed from the turn order to cover the girl’s own health bar by whatever percentage of their own health is available. This not only shields her from damage but also allows her to slowly recover hit points up to the percentage covered. Most important is the fact that this also allows the players to severely mess with the turn order in combat, making it a key element to victory.

Finally, while the labyrinth does not hold a great variety of useful items, what’s there can be crucial. There are items to change colors or the way a player contributes to the girl’s power stock, for example, and while these traits can be changed for free at certain spots between levels, there are enemies that can change them for the players whether they like it or not, so it pays to be able to switch things around in combat. There’s also an item that funnels all loose health energy to a chosen player, but which is just as useful for denying a powerful enemy the chance to heal. All in all, there is little about this game’s battle system that can’t be taken two or three different ways when planning out strategy. 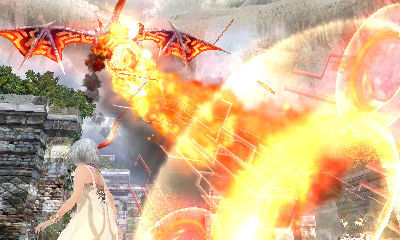 As mentioned above, the graphics in this game are amazing for an early 3DS title. Much of this has to do with the simplicity of its design. The girl is a stand-out example of 3D modeling, but she’s also the only human seen in the entire game, so it was possible to focus a lot of resources just on her. The monsters all have an otherworldly or even ectoplasmic look to them that discourages too much realism, and while there are more than two dozen basic designs and a few more variations on them, there’s also an in-game reason to have three palette-swaps of everything.

Beyond that, there’s the labyrinth itself, which changes in appearance and tone with every one of its ten zones. There are broad ruins, dizzyingly high towers, crimson flows of magma, a temple so overgrown that only the tree roots hold it together, and plenty more besides. In battle and out, it’s possible to pan the camera around with the L and R shoulder buttons or up and down with X and B. This is useful for targeting enemies and initiating combat before they see the girl or the players, but is also nice just for the sake of sightseeing. Adding to the conceit that the 3DS screen is a window into this world, the screen will occasionally fuzz with static. Unfortunately, the actual 3D effects don’t work well with this title, and often result in blurry or doubled imagery. It definitely looks beautiful enough without the visual gimmick turned on.

It’s a good idea to play this one with the sound on for the girl’s dialogue alone, as voiced by Haruka Tomatsu, but Motoi Sakuraba’s soundtrack makes this extra worthwhile. The OST released with twenty-four tracks, ranging from wafting, ephemeral echoes to pounding battle themes with lots of percussion and strings. It matches the general otherworldliness of the setting very well, and I’m very glad that it’s available for rent at my local video store.

Labyrinth no Kanata is an impressive title from the 3DS’s early library, and I can’t see why Konami or tri-Ace never released it stateside. Certainly, the main body of text in this game is low for an RPG, and is generally not that esoteric, either. Covering the voice acting for the girl and the final boss would be a little harder, but still within the bounds of reason and budget. And it’s not like the early 3DS market was brimming with RPGs of any sort. So it’s a pity that this one’s been relegated to semi-obscurity as just one more Japan-only release. It deserved more than that.